I am looking forward to the inevitable zombie uprising, to be honest with you guys. I mean, we, as a family, have weapons, I have a survival plan with detailed maps of every outcome and forking paths and It would be nice to be wanted for a change for my guts. I mean people do say its what’s inside that counts. So with that in mind, it makes sense that The Walking Dead would be my favourite TV series to grace my gogglebox since The Mighty Boosh, and now, with the release of Survival Instinct, will it become my favourite video game? Well, let’s find out!

The Walking Dead: Survival Instinct follows the early days of the apocalypse from the point of view of Daryl Dixon, fan favourite in the TV show and honourable hunting hillbilly, as he travels across the South to try and find Merle, his “more abrasive” older brother, and survive the infection. Along the way, the brothers run into several survivors that they travel with to Georgia to survive.

As far as story basics go, thats about it. The story seems to be here just to facilitate the gameplay. it’s not as deep as i had initially hoped, and seems to just try and fit around the backstory somewhat fleshed out by the TV show, which is by no mean a bad thing. For instance, the game shows you how Merle gets his bag of medicine that T-Dogge utilises to fight blood infections in season 2, and how Daryl gets his crossbow back, and to be honest, it does show separate survivors that The Dixons run into on their expeditions, but to be honest i would like these sections of the game to be fleshed out more, to give a bit more backstory on the brothers… but maybe I just expected a bit much of the game. I do that sometimes. 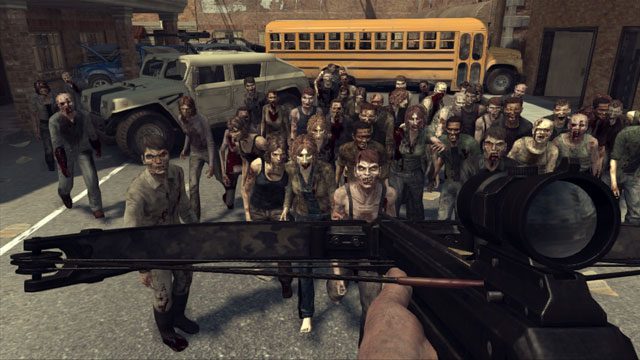 The graphics are also nothing to shout about. The game looks alright for a Next Gen console, standing up with current Triple-A titles, but with weird graphical glitches and draw distances seeming no further than 20 feet, you cant help but leave the game with the impression that a bit more time spent on the game would mean a bit more quality. I mean, Terminal Reality did their damnedest to make the character models look as realistic as possible, and, obviously, Daryl and Merle look as close is possible to their real life counterparts as they can get them… But the zombie models seem repetitive, and i understand why they are – it would be a ball ache to create millions of different zombie models – but it couldnt help pass my attention that some recycled zombies seemed “different” because they lost limbs… and that smacked somewhat of laziness to me.

Theres not a lot that can be said for the music in the game as well. True to the TV show, the music is used to emphasise dramatic or exciting plot points, but for the most part, seems almost non-existent, and the music that does appear is kind of repetitive and bland, just the same few chords whenever zombies see you or something happens. Yet the silentness seems to intensify the loneliness you can feel when scavenging supplies. One thing i do like, however, is that the TV show opening titles and song are similar in game, and that evokes a large dollop of happiness in my raisin-like heart.

Now, gameplay. This is where I cannot rant anymore. This keeps the game afloat. As the title suggests, the game is based on survival. Whether you are in story missions, or random environments that you come across on your travels, you will need to scavenge ammo, weapons, health items and fuel to continue on. At some points on their travels, the brothers and their fellow survivors will suffer mechanical failures or road blocks that need to be dealt with as well.

This sells the game for me. These gameplay mechanics seen relatively simple, but coupled with zombies that can swarm you in a group of 3, this really invokes a feeling of panic, and immerses you in a world where around every corner and behind every door, death is waiting… or at least someone you used to know, dressed as a dead guy. Plus, to add to the pressure, and something that co-incides with the TV show’s lore, gunshots and noise of any sort can attract the horde, meaning that blazing through ammo, clocking head shots isnt the way to go, and guns should really be a last resort to be used when you find yourself trapped in a sticky situation.

Also, players can choose their own way across Georgia. They can choose which directions and paths to take, as well as whether they use back roads, streets or highways. each choice has advantages and disadvantages, however. For instance, if you travel by back streets, it uses a lot of fuel, but places to find to loot are abundant, where as if you use the highway, it uses less fuel, but there are less chances to stop and find things like fuel and ammo, so each decision needs to be weighed up. 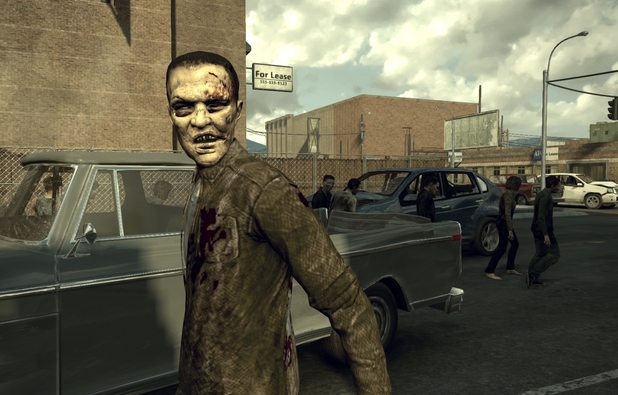 All in all, The Walking Dead: Survival Instinct is a good game. Not a great game, not a poor game, just a good game. I was expecting a lot more from this title, like i said above, but maybe that is because i love the TV show. The graphics and invisible story knock this game down a few pegs, but the gameplay is a reason to return to this game once its completed.

Why not check out the video Mousie and Jenco made for The Walking Dead: Survival Instinct!