I was promised the role of God Of War once. It was a tuesday. I was in Shoreditch, visiting my uncle Barnabus for his 42nd birthday. Down this alleyway, a man was sitting on an office chair he’d spray painted gold and called out to me using a mega phone. I enquired what was wrong and he said he had a once in a lifetime opportunity that he couldn’t wait to impart on me.

He said that, if i gave him north of £11, he would re-instate me as the new God Of War. I obviously jumped at the chance and paid the man outright on a credit card (he had a CHIP & PIN machine hidden inside a pringles tube he used to protect from people stealing your PIN). After the transaction was completed, he spat in my face and ran away… So ups and downs, Swings and roundabouts and all that… Anyway…

God Of War – Ascension acts as a prequel to the multi-million dollar franchise of the same name. It establishes the reason why Kratos is so butt-hurt at the gods for years of toiling and tasking, only to be gifted with years of nightmares and guilt about accidentally murdering his family in a village raid. As the game starts, Kratos is imprisoned by a group of creatures called Furies, eternal tormentors at the beck and call of the Gods who imprison anyone who goes against their words. Their first victim, Aegaeon, the Hecatonchires, who broke a blood oath with Zeus, was imprisoned in stone and turned into a giant prison, in which Kratos is held. After breaking out of his shackles, he starts along a massive adventure for revenge against the Furies, who manipulate his vision of the real world in order to break his spirit and kill him. 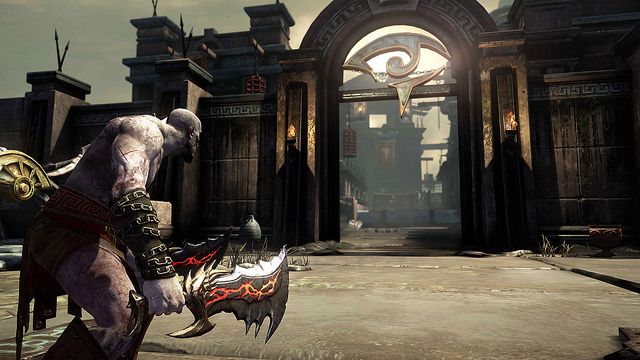 The story seems sort of generic, although saying that, im not sure how many revenge stories use Ancient Greek mythology as a backdrop. To me, I cared very little for the story. Kratos’ backstory seems to be the only place the series wants to go. Its like Kingdom Hearts – every which way but forward, and this is something I have a problem with. As a player, you get a feeling that through their adventures, you bond with the main characters of video games, like you are a team, and you cannot wait to see how they fare in the next adventure. However, when their next adventure is a previous adventure, it stunts your development with the character, almost as if theres a part of their backstory you need to know before you carry on.

And i appreciate prequels when they are executed well, such as Tomb Raider, where Lara is a completely different person entering into the adventure than the Lara we are used to, but Kratos is the same old Kratos, an expert warrior with pale skin and a pissed off expression thats harder to shift than constipation. The prequel doesn’t do a lot in terms of story and character development except fill in black spots in his backstory, that, to be honest, i never wanted to know about.

The gameplay starts relatively true to the other instalments. Light attacks with the Square button and heavy attacks with the Triangle button help you rack up insane combinations with Kratos’ Blades Of Chaos. Along the way, Kratos can also collect magic powers, gifted to him by the gods of Olympus, to deal maximum damage in fights where you may be outnumbered. The quick-time kills for bosses and mid-level bosses return, but this time they are even more gruesome and twice as polished as God Of War 3. Its sometimes a spectacle to watch the meticulously creative ways Kratos kills off giant mythological creatures in some scenes. I say watch, you’d better keep an eye on the quick-time commands otherwise you’ll be the one ending up in half.

Now the music. This is one of my favourite parts of a God Of War game, and this instalment is no exception. The music helps to set the modd wherever you are. At the foot of giant monuments, the music is grandios and spectacular, putting the enormity of the task at hand into perspective. During boss battles, the music picks up the pace, lending the scene a sense of urgency that other games cannot compete with. Plus the sound effects and voice acting in this game is top notch. No witty lines to destroy a scene’s integrity, no stupid clunky sentences that seem out of place and ruin the immersion that the game so painstakingly sets up. I take my hat off to the sound artists at Santa Monica Studios… Well done guys… Well done.

A new addition to the God Of WAr franchise is that of multiplayer capabilities. It works as such: You get a character that you can enter games with and level up their weapon and armour skill through getting kills, completing multiplayer objectives or simply being on the winning team. You can also side with one of four Olympians who can bestow special abilities on your Champion to help them in battle. Combat works exactly the same way as in the main game, except players can call upon magical items and spirits like medusa’s gaze to turn others to stone. 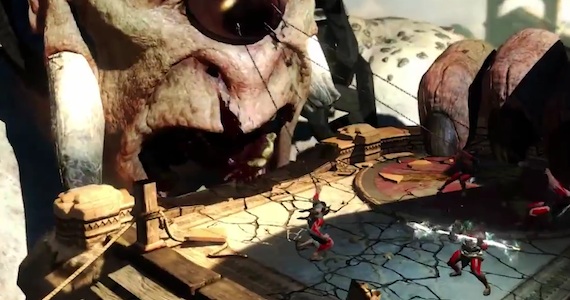 Multiplayer is great fun. A lot of time was wasted on this part of the game as the battles are fun, but the champion development is also deep and engaging and the fun will be to try and master the game and predict what other players will use and choose to attack you with. Its all good!

All in all, God Of War Ascension is a good addition to the series. Granted, it falls down in story and some parts of the game feel repetitive and dated, but the single player campaign is still strong enough to draw in players, whether they are fans of the series or newcomers. Plus, backed up by the multiplayer feature, the title has the potential to be a fan favourite long into the future.