Southampton University is preparing to have the roof blown off yet again as Takedown returns for a third year! Last year saw the likes of The Blackout, Don Broco, We Are The Ocean and Mallory Knox take to the stage during this one day event and all for £30 or £34 including the after party.

I think you’ll agree that’s pretty good value for money even if you only saw the four bands mentioned above!

On December 4th, Takedown announced the first 15 bands playing the festival on March 15th. These include headliners; Funeral for a Friend, big guns such as Yashin and Feed The Rhino, as well as up and coming underground kings Baby Godzilla, and Southampton local boys Dead!

The full list of bands announced so far is as follows: Funeral For a Friend, Yashin, Heaven’s Basement, Glamour Of The Kill, Feed The Rhino, Lost Alone, Jett Black, Skarlett Riot, Baby Godzilla, I Divide, The Dirty Youth, Dendera, Western Sand, Our Hollow Our Home and Dead. 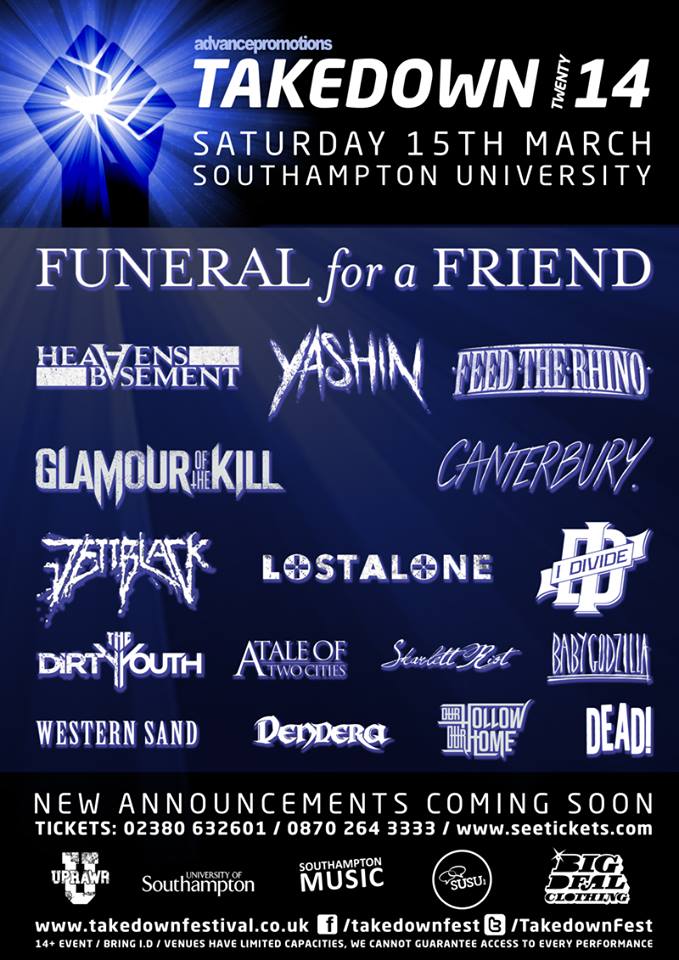 Super Early Bird Tickets for Takedown 2014 go on sale at 9AM on December 6th on the Takedown Facebook page and all for just £20, £24 if you want to go to the after party as well! If that’s not enough to tempt you, check out this promotional video of Takedown 2013 from Atticus Beer!