The Neighbourhood brought a taste of the East Coast to Camden at their sold-out show at The Roundhouse. The Californian five-piece put on an incredible show at one of London’s top live music venues.

The Neighbourhood brought a taste of the East Coast to Camden at their sold-out show at The Roundhouse. The Californian five-piece put on an incredible show at one of London’s top live music venues. The epic show at The Roundhouse was the last date on their extensive European Underwatour which saw them play four other venues across the UK as well as a string of European dates. And they certainly went out with a bang! …or should that be splash?

It was a case of East Coast vs West Coast as super-cool Brooklyn band Mothxr supported The Neighbourhood on their Underwatour. With their unique, genre-defining alternative sound, they made the perfect accompaniment to The Neighbourhood’s rock/R&B infusion. Many of the tracks on Mothxr’s debut album Centrefold are stripped-back and minimal but the band treated the crowd to an awesome, amped-up rendition. ‘Easy’, all drums and bass guitars was given a pretty mega re-work for the live stage, while ‘Victim’ (think off-kilter beats, distorted vocals, out-there synths and a trumpet thrown in for good measure) gained an impressive guitar solo and outro. Album title track ‘Centrefold’, with its bubbling synths and rocky guitars, formed the perfect basis for lead singer Penn to really showcase his vocal talent.

” Jesse Rutherford is quite the frontman, and he took command of the stage with such unabating enthusiasm that he was only a couple of songs in before he slipped, recovered and styled it out; there was a touch of The Hives’ Pelle Almqvist about his stage presence and impromptu shrieking high notes”

After a short interlude, it was time for The Neighbourhood. Jesse Rutherford is quite the frontman, and he took command of the stage with such unabating enthusiasm that he was only a couple of songs in before he slipped, recovered and styled it out; there was a touch of The Hives’ Pelle Almqvist about his stage presence and impromptu shrieking high notes. They played an impressive set, plucking tracks from their three EP’s, two albums and a mixtape.

‘Greetings From Califournia’ was the perfect opener: it just shouted “Are you ready for The Neighbourhood?”. The crowd was thrown in at the deep end with Jesse bounding onto the stage, an unmissable vision in head to toe white. The track has the band’s trademark faltering synths and electric guitars which are pushed to the limit and which somehow conjure up images of California as this magical land as dusk rolls in across the ocean. ‘Prey’, with its fresh 60s vibe, gave Jesse a chance to properly show off his moves, whereas downtempo ‘Daddy Issues’ with its ultra-deep bass, male harmonies and touching lyrics which shine light onto Jesse’s relationship with his late father highlighted the band’s versatility. Other stand-out tracks were ‘Let It Go’ which is punctuated by resonating bells and, the angsty ‘W. D. Y. W. F. M?’ (What do you want from me?), both personal faves from the band’s 2013 I love You album. 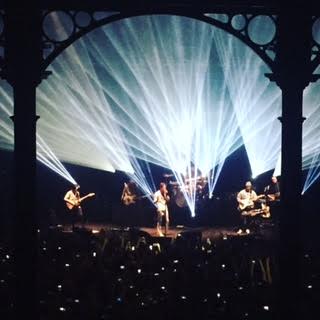 But everyone who was in the crowd that night will vouch for me when I say that without a doubt the highlight of their set was the incredible rendition of ‘Wiped Out!’. The band performed the track, which I’ve always thought could be three songs spliced together, with a breathtaking mid-way drum solo. The song takes a darker turn midway through where the beat slows, the guitars perform drawn out solos and then the beat kicks in again. Cue the spotlight turning to drummer Brandon Fried who banged the living daylights out of those skins and somehow came out the other side with his sight till intact. Then Jesse came back to the fore for the track’s outro, completing the amazing spectacle.

Arguably their most revered track ‘Sweater Weather’, with its catchy chorus, addictive beat and punchy singalong verses, was given the penultimate spot on the set list. But what was to take the coveted last spot? Of course, the one and only ‘R.I.P 2 My Youth’. The lead single from their 2015 Wiped Out! album, ‘R.I.P…’ comprises heavy bass coupled with atmospheric synths and powerful lyrics which hint towards the difficulties of growing up and the loss of one’s youth. My verdict? 10/10 would see again. Definitely.

No one in that crowd wanted the show to end, but after the show comes the after party. Through a din of classic American R&B (where is Nelly these days?) I chatted to Mothxr about the show and being on the road with The Neighbourhood. I got the distinct feeling that it’s been a pretty awesome experience! Penn Badgley, Simon Oscroft, Darren Will and Jimmy Giannopoulos came together to form Mothxr about two years ago in New York. Lead singer Penn, originally an actor — who I remember from his Gossip Girl days — honed his talents before taking to a very different stage. When asked how they’d describe their sound, keyboardist Darren said that it’s something that can’t really be defined. Interestingly, he said that they’d been asked if they were influenced by The Weeknd but they’d actually started making music before The Weeknd came onto the scene. To me, their music is very “Kitsuné” (the Paris-based label that’s a by-word for achingly cool electronically-influenced music). As the party wound down, I wished Penn good luck for his gig at Birthdays the following evening, and off home we ran, able to count the number of hours’ sleep we’d get that night on one hand — yeah, it wasn’t many.

Mothxr are embarking on an extensive US tour but fingers crossed they’ll be back in the UK soon! Find out more about them here, and check out the 80s-inspired video for Touch below which is taken from their ultra-cool album Centrefold which is available to buy from iTunes now.

The Neighbourhood are also touring the US but will be back in the UK for the Reading and Leeds festivals this August. Find out more about them here, and check out the classic Sweater Weather below. It’ll have you dreaming of a Cali adventure!