Last month Christina Martin brought her own brand of Americana/alt-country to Camden. I was introduced to the talented Canadian musician’s music a few months ago when I first heard her captivating single ‘Take Me Back In A Dream’. Her unique vocals are mesmerising and ethereal, and she possesses a sound unlike many of the female artists currently in the charts. Having recently released her fifth album and earned multiple East Coast and Nova Scotia awards, she’s firmly established herself as an artist and has a growing fan base on both sides of the Atlantic. Therefore, it was with much excitement that she headed to the UK for a 20 date tour this March.

London-based Folk singer Harry Harris opened for Christina, introducing the audience to his own personal style of storytelling and drawing everyone in with his relatable lyrics and catchy guitar rhythms. A number of his songs have a running football theme and despite him saying he’s never won any awards in his lifetime I think he’ll soon be scoring big time with his honey tones and enchanting melodies! Harry played a number of tracks which are all unique in how they possess a distinct narrative and aren’t linear throughout. His songs build from start to finish and draw the listener in with his sincere emotion and relatable subject-matter.

“The Green Note was the perfect venue for a relaxed, informal performance and complemented her musical style perfectly. The vibe was friendly, warm and felt akin to a performance in your front room”

His voice is powerful and the subject matter of the songs incredibly moving, particularly in the track which he penned following a trip to New Orleans: “Hey new Orleans / you look just the same as in the magazines.” The same could be said for his voice: what you see is what you get, raw, powerful and unfaltering.

And then it was on to the main event: Christina and her partner Dale took to the stage and opened with the beautiful ‘Take Me Back In A Dream‘, a firm favourite among her fans. In the album track version the strong beat, infused with mesmerising synths, is stripped back and minimal, allowing Christina’s voice to take centre stage. Then the gentle introduction of guitars brings a new dimension to the track: fading riffs and lingering echoes with layers of backing vocals and sweeping, recurring notes. Before the show I was curious as to how she’d perform this track on such a small stage as the recorded version has a large production and electronic backing but the two guitars filled the room and the track was given a whole new lease of life! Classic Americana is a major influence – think powerful guitars, American cities name-dropped and a country twang, all set against an incredible backdrop of guitar riffs and enchanting vocals. 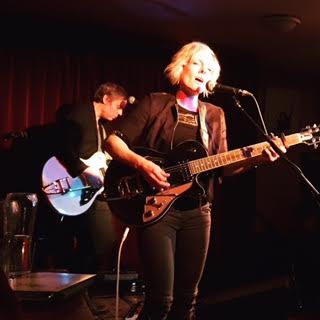 Christina takes influence from many aspects of life. The heart wrenching ‘You Don’t Have To Leave Tonight’ was inspired by her family when she was growing up whereas the rocky, angst-filled ‘I’ve Got A Gun’ was a result of drawing on those problems in life that feel like they’re never going to go away.

‘Guard Your Heart‘, where Dale’s guitar takes centre-stage was one of my favourite tracks of the evening. It’s taken from her 2008 album Two Hearts and has a sultry vibe with some incredible reverberating guitar solos. Christina said she loves performing this track just to hear Dale’s guitar skills which create an amazing atmosphere in a small venue! The chirpy ‘Somewhere With You‘ is another top track that’s also been featured in hit TV show Heartland and we were given a beautiful performance as Christina and Dale sang in unison. The show closed with a breath-taking unplugged rendition comprising of just Dale’s guitar and Christina’s voice which clearly demonstrated her incredible diversity as a singer and closed the show on a high.

Speaking to Christina after the show she said she’s thoroughly enjoying her UK tour, vising so many of the big cities and playing for appreciative audiences each night. One of her favourite gigs on the tour so far was at The Bluebird Café in Edinburgh, which is well-known for its live music nights. There was a great audience who really got into the music and created a brilliant atmosphere. Her favourite song to perform live is ‘It’ll Be Alright‘ because she can let go and it’s a very upbeat, fun song which is a definite crowd-pleaser. When not touring, herself and Dale retire to their home in the beautiful and idyllic Nova Scotia. I can imagine the setting and serene landscapes are the perfect backdrop for them to pen new songs, work on material and rehearse together. She said that when she was younger she was a self-confessed raver! But after being introduced to the wonderful sound of Americana she knew that this was the musical route that she wanted to follow. Christina said she has a surprisingly large fan-base in Germany and is due to tour the country this coming April before embarking on an extensive tour of her native Canada.

Find out more about Christina here, and have a listen to the lovely ‘You Ran From Me’ below, which is taken from her album It’ll Be Alright.