A stunning collaboration of musical genres for a brilliant cause, with a triumphant performance from both band and the live orchestra.

Bring Me The Horizon brought about a whole new dimension at the Royal Albert Hall alongside a full live orchestra, in support of the Teenage Cancer Trust.

Support came from American rock band PVRIS, who worked to warm up the crowd with tracks off their debut record White Noise, playing a half hour set including one of their latest songs ‘You and I’ and fan favourites “St. Patrick” and “My House”. Creating small pockets within the audience, the band jumped along to the drum beats and swaying synths, warming up the crowd nicely. During the interval between artists, presenter Tim Lovejoy (you know, the guy from Soccer AM and Sunday Brunch), spoke about the Teenage Cancer Trust and introduced a group of young adults to a large round of applause. These individuals had been affected by the disease and had benefited from the support of those involved with the Teenage Cancer Trust.

Anticipation grew as the conductor, orchestra and choir took to their positions and began to tune up their instruments. The house lights dimmed and the cheers began to roar as the orchestra fizzed out the introduction for ‘Doomed’ as Sheffield alt-metal quintet Bring Me The Horizon began to filter on stage and set off the evening’s set with the first track off That’s The Spirit. Following that, ‘Happy Song’ prompted chants from the crowd spelling out “S-P-I-R-I-T” and leading to the first mosh pit opening up on the floor of the Royal Albert Hall. The mayhem had started early.

The string section within the orchestra added more sharpness to the crackling drums and bass lines of ‘Sleepwalking’, enough to bring a chill throughout your body. ‘Throne’ had the crowd jumping in unison, before leading into an eerie choral introduction for ‘Shadow Moses’. Full of energy — and probably Redbull — sections of the audience circled back into rowdy mosh pits, and threw themselves around the RAH’s floor. 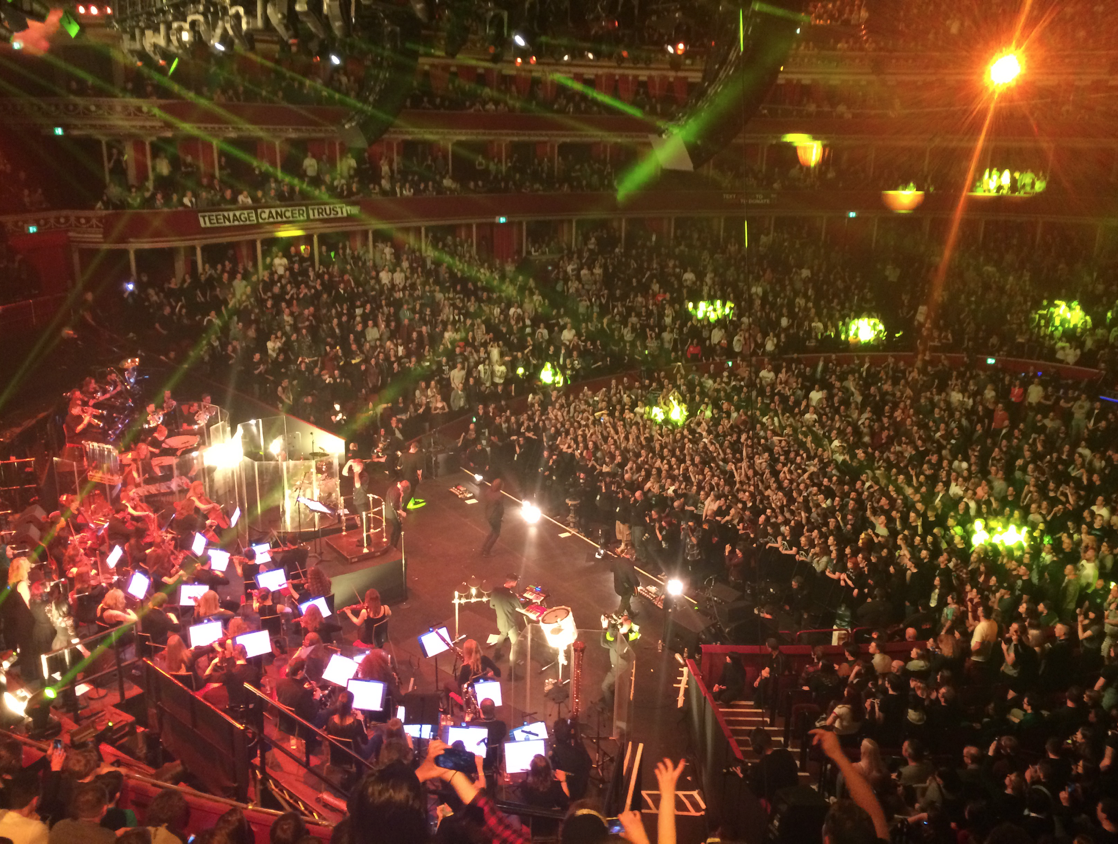 ‘Can You Feel My Heart’ elicited one of the largest responses of the evening, as the audience’s singing gave the band and the orchestra a run for the money, exclaiming “I’m scared to get close / I hate being alone / I long for the feeling to not feel at all / the higher I get / the lower I sink / I can’t drown my demons they know how to swim”, as waves of bodies jumped in synchronisation.

Away from the music, their was room for poignancy in what was an emotional evening. Frontman Oli Sykes gave a speech about how cancer has affected people in his own life, and gave words of encouragement to those battling the disease; he spoke about the importance of not allowing the disease to win but to fight together and bring a sense of unity between family and friends. He dedicated the next track — the powerful ‘Drown’ — to all those affected by the disease, to which the crowd began to repeatedly exclaim “Fuck cancer!”

The band performed older, heavier tracks from their previous records including, ‘It Never Ends’, ‘Antivist’ and the blood thirsty ‘Empire’. The setlist included the live debut performances of ‘Avalanche’ and encore ‘Oh No’, which included a delicious an jazzy saxophone solo. Indeed, a gentle reminder of the oddness that lay before them: The unprecedented combination of heavy metal spliced with a classical orchestra brought each song to their peak. The beauty of subtle hints of the xylophone, tones of the brass section and the building crescendo of the strings developed a surreal atmosphere within the Royal Albert Hall, turning each song from an alt-metal skeleton into a refined rock anthem.

Watch a fan’s video of the band performing ‘Drown’ below: