Dublin singer songwriter Ailbhe Reddy and her powerful blend of indie folk makes her the one to watch this summer.

Dublin singer songwriter Ailbhe Reddy and her powerful blend of indie folk makes her the one to watch this summer. To coincide with the release of her second EP Attach to Memory, Ailbhe played an intimate show at The Slaughtered Lamb last Wednesday. The gig showcased her unique and unmistakeable vocal which is even more enchanting in a live setting.

Ailbhe performed a wealth of tracks from both her new EP and last year’s release Hollowed Out Sea. She describes this new EP as “an evolution of my first. Most of these new songs are more up-tempo which shows the fuller sound of my live shows.” Each song tells a story, often about the pain of lost or unreciprocated love, but between tracks Ailbhe provided a humorous commentary to lighten the atmosphere. 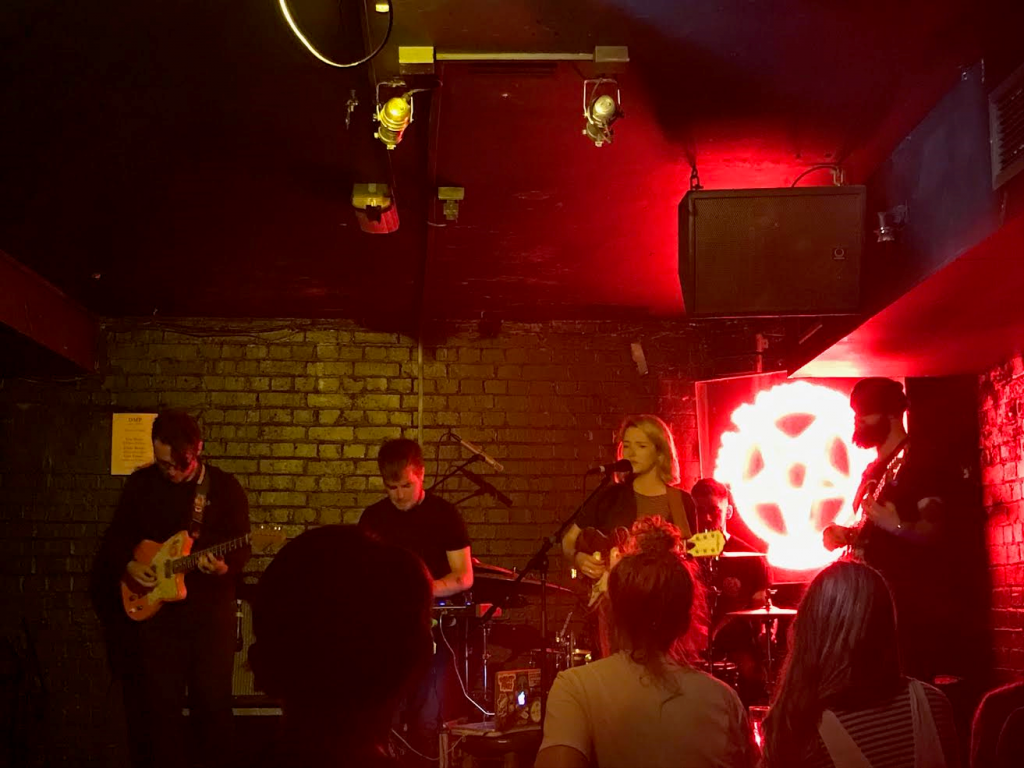 Ailbhe’s current single is Fingertips and it exhibits her powerful vocal in its truest form. It’s a track about love and sexuality with relatable lyrics sung in her signature relaxed style. It’s a folk-pop crossover track which has strong chart-topping credentials. Ailbhe’s powerful vocal is the centre point of the track, with the percussion intentionally stripped back on the verses. The lyrics hit home with their honesty and rawness. “Sundays were our day until you stripped your love away” nods towards a feeling of loss that’s still in its early stages. There’s a slightly funky feel to the guitars on the chorus, providing the perfect contrast to the deep subject matter.

Never Loved begins with beautiful guitar strums and understated keys. Ailbhe’s vocals are sorrowful as she recounts a tale of lost love. The lyrics are heavy and heartfelt with odes such as “I never loved you like I miss you now” sweeping the listener up so they’re lost in the story. For this track, she was joined on stage by a violinist and the gorgeous strings coupled with Ailbhe’s raw, and undeniably emotional vocals, lent the track a powerful atmosphere.

Loose opens with Ailbhe’s vocals strained and haunting against a backdrop of electric keys. The angelic harmonies kick in giving the track more depth. In a flourish, like a change of backdrop in a theatre performance, the song morphs to become more poppy and free. Ailbhe lets loose and lets her vocal carry her away, a great track of two parts.

Previous single Relent begins with Ailbhe’s isolated vocals, intensifying as the verse builds. This track has a dark edge with its lyrics touching on the themes of death and the turmoil of a lover who’s come and gone. Describing her chest as being “just a hollow since you left” highlights the intensity she feels about the subject matter. The strings further emphasise the passion of the lyrics.

Distrust, with its stripped back guitars and isolated vocals, was introduced by Ailbhe as having reached 1 million streams on Spotify. This is a brilliant achievement and Ailbhe wittily thanked her mum for all the effort she’d put in to streaming it over and over so many times. The steady rhythm breaks down toward the end as Ailbhe serenades the listener accompanied by some beautiful harmonies and sweeping strings.

Disconnect, the last track on Ailbhe’s set, had a rocky edge and was one of my favourite tracks of the night. The intro is incredibly striped back, just Ailbhe’s distinctive vocals plus a minimal bassline to set the scene. As the bridge hits the guitars are ramped up, finally freed to reach some dizzying heights. The track flows like an unpredictable current, one moment hushed vocals and a few gentle beats, the next it’s indie guitars and Ailbhe’s voice at full pelt. Definitely another stand-out track.

Ailbhe Reddy possesses a voice that’s pure and captivating and it’s exciting to see where her musical journey will take her next.

Find out more about Ailbhe Reddy here and have a listen to new single Fingertips below. Be sure to catch her at one of her upcoming gigs: