Interview: James Bay – I’ve been creating a kind of crescendo, introducing the sound of a band”

Since chatting to James Bay at Barn on the Farm over the Summer, he’s been carving a pretty impressive path with his music, set to release his new EP ‘Hold Back The River’, currently on a US tour with Hozier and close to selling out his own headline tour.

We caught up with James again just before he sets off on his own UK and Ireland tour to chat about what he’s been up to and what we can expect from him soon.

The last time I spoke to you was at Barn on the Farm during festival season. How have things been for you since then?

Yes, back of the car! Things have been really good. Loads of stuff going on which is cool and everyone seems really excited about everything. When I get back and do my UK tour, although Dublin hasn’t quite done it yet, every other date is sold out which is amazing!

I actually just saw that your February Koko show in London is now sold out?

You’re currently on tour with Hozier across the US. How is that going?

Amazing! I’m a big fan, so everything else aside, it’s really lovely to be able to see him. And the band are amazing, it’s a really great sound. And the crowds are all amazing as well.

They’re just their own version of crazy really, there’s not a bad word to be said. They’re enthralled in it all in a different way. I think that’s pretty natural ’cause both are so far from each other but they just show their love in a different way. It’s hard to get into the detail but they’re just a very cool, very attentive audience.

You’ve got ‘Hold Back the River’ EP on the way. What can people expect from that?

Well to be honest, I’ve been creating a kind of crescendo from ‘The Dark Of The Morning’ EP through ‘Let It Go’ EP up to ‘Hold Back The River’ EP, introducing the sound of a band that I’ve been working with. So there will be a little solo moment on the EP where things are more intimate like people are used to, but on ‘Hold Back The River’ and the other one or two songs on the EP, I wanted to make things big so you get that as well.

Yeah I was just about to say, even the track ‘Hold Back The River’ itself has a much fuller sound to a lot of previous stuff. Was the idea of your live show and bringing a band along to live shows in your mind when you were writing those songs?

Yeah yeah, definitely. And I had that idea in my mind since before the first EP if I’m honest and I just focused on what I was doing most at the time with each EP. But it’s all inspired by the stuff I used to listen to, and still listen to, but that I used to grow up playing along to in my bedroom. I always have that sound in my mind alongside where I started with things quite intimate as I said. That’s what I like about Bruce Springsteen and people like that, even when he’s got songs where he sort of shouts and stamps a bit more, he likes to play it soft as well, so I like that.

I saw the music video for ‘Hold Back The River’ as well, and in comparison to previous videos where you sort of just did a live performance of a song, it’s obviously quite different but is still so centred around the whole live side of what you do. How was the experience of doing that music video?

Oh it was great, I really enjoyed it. I was able to bring the band in and bring that sort of live feel so something that was obviously a pre-recorded music video. I had a lot of fun. I look forward to doing it again.

Have you got a full length album on the way? I remember you mentioned at Barn on the Farm that it was pretty much done?

Yeah, it’s gonna be next year ’cause I’m gonna do this EP for the end of this year, then another EP, then yeah, album time! No date yet, so I can only say so much, but it is on its way. I’m really excited to show everyone.

Are there gonna be songs that were previously released on EPs as well as some new tracks or what’s the content sort of made up of?

Yeah, that’s what I’m really excited about. There’s new material on there that nobody’s heard, I’ve played some of it live, but some of it I haven’t even played that much. I’m really excited to show people to new stuff and the new sound, and yeah some of the songs that people have already heard I’ve sort of worked up to put on the album.

As someone who’s played a lot of live shows, both as a support act and as a headline act, what do you think is important in a support act?

I think the ability to hold a crowd in their own way is the coolest thing about a good support act. I think the cold truth of it is that some people get chosen just to be a bit of live music before the main attraction comes on. I think the best support acts are the ones who look like they could very well be the headliner. And that comes, you know, you’ll be the support act but you’ll work on the songs and make sure they’re great and always make sure you’re trying to win some fans while being the support act.

It’s just more of a challenge I guess for them to grab the attention of people who have probably never heard them before.

Yeah of course it is. And I experienced that a lot and I learnt about it just through playing a lot of open mics and stuff. You’re playing in front of people down in a pub just having a drink, and they didn’t pay to see you, they don’t have to listen to you, but if you win someone over, there’s a lot to be said for that I guess. And you can take that skill and technique into being a support act.

Following on from the tour you’ve got coming up, what’s your plans leading into the end of the year?

There’s loads of cool promo things happening, getting my face around and getting my songs around more importantly! So just the tour and a couple of other things before everyone wraps up for Christmas and then I’m already hoping to get back out on tour around the time of the Koko show next year, around the UK and Ireland again. That’s the plan!

Brilliant. Thanks so much for that interview, I look forward to catching you at the Dublin show.

No worries Wynona, see you then.

Check out ‘Hold Back The River’ below: 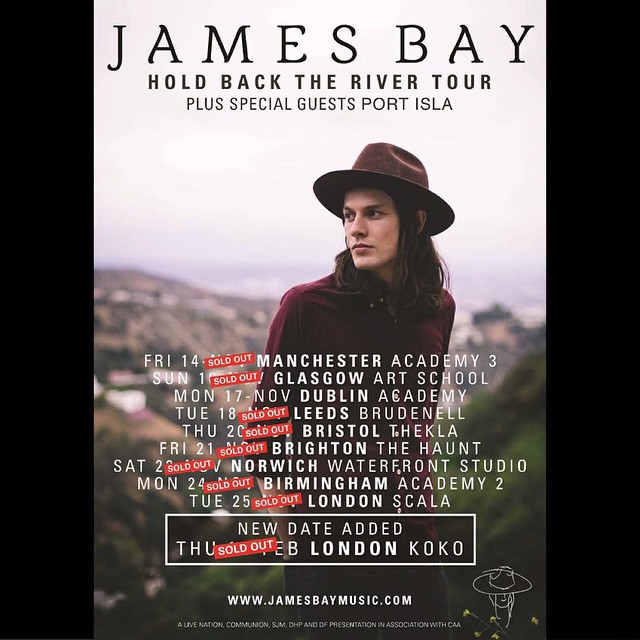