Fortitude picks: Who will set y not? festival ablaze.

Y not? festival is played out on the beautiful Derbyshire Peaks each summer. Born eight years ago, the event was first set in an imposing but small quarry, attended by just five hundred people. Y not? festival now carries significant credibility in the small, independent UK festival scene. But it still retains the carefree, good-time atmosphere of those original, dawning years. This year White Lies, Dizzee Rascal and Frank Turner will headline and Fortitude will be there covering the show.

Y not? founders are keen to stress the importance of the bands. Acts will only be chosen if the founders are confident they can put on a good show. So ‘Y Notters’ may not get the grandiose entertainment on view at the likes of Glastonbury or Bestival, but they can be assured they’ll be getting some cracking live music.

Here we look at the line-up and choose some unmissable acts.

Shed Seven
York’s iconic indie rockers are set to bring their Smiths inspired Brit-pop to the main stage this year. We can’t wait to hear the guitar arpeggio and wailing vocals, so reminiscent of the 90’s era, get the crowd into a groove. Set to carry on their comeback on a UK tour this winter, Shed Seven will be looking to make a mark on the festival and you cannot miss them.

Circa Waves
Liverpool indie-quartet Circa Waves may be very young on the mainstream scene, but their sound is very reminiscent of The Strokes and The Libertines domination of British music a decade ago. It has lead to an early buzz stretching across radio, print and online. Track ‘Young Chasers’, their most popular to date, is full of infectious melodies and a rousing chorus, perfect for a festival crowd up for a party.

Ella Eyre
Following in the footsteps of Amy Winehouse and Katie Melua, female singer-songwriter Eyre studied at the famous Brit School in Croyden, fine tuning her drum’n’bass production and soulful vocals.
Having bagged ‘Single Of The Year’ at the recent Brit Awards and the runner-up prize at the BBC Sound Of 2014, it has left us wondering why she isn’t a little higher on the Y not? bill. Make sure you catch Ella working the crowd on Saturday at the Quarry stage, prior to headliners British Sea Power.

Spector
With indie-rock featuring heavily on the Friday night main stage, Spector are easily the most anticipated. With the sound lying somewhere between The Killers and The Strokes, tracks like, ‘Friday Night, Don’t Ever Let It End’, and ‘Never Fade Away’, will certainly work-up the crowd into a fever. With new songs under their belts, Spector will light up that Friday night like no other.

Darlia
The rising Blackpool rock outfit are arguably the best of a recent rock resurgence, with bands such as Drenge, Royal Blood and Lonely The Brave all making a noise. On Fortitude’s radar for a while now, Darlia, with hints and influences towards Nirvana, will certainly set y not festival ablaze. See them on the quarry stage on Sunday!

Check out the official video for ‘Napalm’ by Darlia below.

Click the image below to see the whole line-up. Further ticket details, including where to buy them, are at the foot of this article. 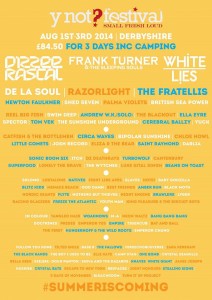