Review: To Kill A King – Cannibals With Cutlery 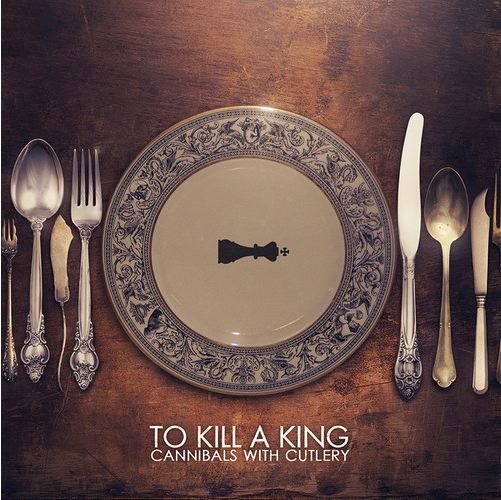 To Kill A King’s Cannibals With Cutlery is a 55 minute record, which sounds like a long time. Holding the listener’s attention past the 40 minute marker is a tough gig, unless you’re knocking out tunes that push the ten minute threshold. Once you’re up to 50 minutes, it’s a tall order.

Birthed in 2009, TKAK’s 5 piece lineup has, according to their Wiki entry, been compared to The National, Mumford & Sons and Frightened Rabbit, and a pronounced touchstone to this writer, Lift To Experience. The Texas Jerusalem Crossroads was a shimmering cloud, replete with glorious crescendos, star-grasping scree, stark instrumental passages and laconic vocal delivery. It had an intimate, dreamers production, leaning very much toward the round-edged static of shoegaze rather than the boisterousness of post-rock, but it contained a loveable, world-worn character.

Cannibals With Cutlery is shot through with that feeling. But an individual, determined personality asserts itself; I Work Nights And You Work Days is all delicate piano and voice. Much has been made of Pelleymounter’s soothing tenor, which calls to mind LFE’s Josh T. Pearson, Chris Martin, and a sliver of Gary Lightbody. Pelleymounter’s voice, its unwavering, sombre strength writ large across the muscular production, has a human, believable delivery. Even the ‘Maybe we’ll just fall apart/maybe we’re just full of heart’ couplet that climaxes Besides She Said is sung with enough weight to make it work; easy cheddar in the wrong hands.

The video that accompanied Fictional State puts the rest of the record into context. Though Cannibals With Cutlery is not for release until the 23rd of February this year, the video appeared on YouTube on April 21st 2011, and sets a good precedent for the album. A great deal of care went into this very clever video – beautifully blunt in its depiction of a families’ turmoil – and similar care has been applied to the rest of the record. The production brings a warm melancholy to the songs, and every instrument is played with exacting character. It is because of this that the album conquers its greatest weakness.

The chord progressions are familiar in the way that other people in your family are familiar, and the lyrical content is awash with unrequited, regretful proclamations; always too late, could have done this and so on. But what separates this album from its peers in a field almost aquatic in its wetness, is the ease with which the songs will themselves into life.

The grim, despondent lyricism of Gasp, with it’s millions-of-hugging-stars bombast at 1.19, could have been a freezer-dimensioned block of pressed ham, but reaches the upper atmosphere with grace and ease. This quiet confidence permeates the whole album, and the dynamic range on this anthemic crusade is well crafted. There is a moment, halfway through Choices, where the drums enter and there is a sudden flare of Phil Collins, then the song makes a left turn into a parallel dimension where they exist as an impossible coagulation of the Beach Boys and the Corrs. This is unwise but the whole band seem to be in on it, and they ride the cheery violins to an expertly tamed-down ending.

Aside from this unexpected side street, Cannibals With Cutlery swells regally from track to track. It would be interesting to see what the band will produce next, as their inclusion of brass (superbly deployed) next to the more commonplace string section is to be celebrated, and contributes to a well-oiled widescreen sound. The Fictional State video shows a band as at home with their visual message as their sonic one, and with that medium so vital in today’s industry, this should give them much to work with.

What they used to call ‘a grower’, this is a good record, and it will soundtrack moments of your life where you needed to be strong and do something but you didn’t; then you fire this on and it rebuilt your resolve, montage style. Human, rightly self-assured, and an example to the others.