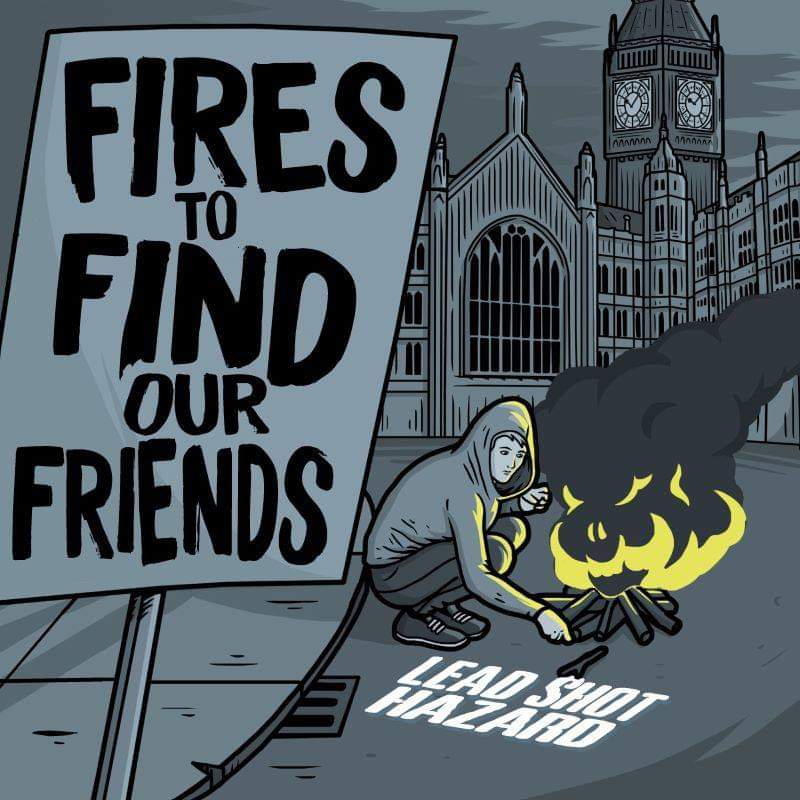 Since their inception almost a decade ago, Lead Shot Hazard have become a solid fixture of the UK’s ska punk scene. Following the release of their ‘War & Pieces’ EP back in 2016, talk of a follow-up album has been omnipresent on the lips of the band and fans alike, and as the British summer draws to a close, dreams have finally become reality. ‘Fires To Find Our Friends’ is due for release on 25th August, and it’s a joy to announce that after all this time, the album does not disappoint.

If one thing can be said for Lead Shot Hazard on first glance, it’s that they know how to start an album right. ‘Fires To Find…’ kicks off immediately with the chugging and gloriously visceral riff of ‘Jokers, Then Kings And Queens’. The song invokes a sound that is very much in keeping with the band’s trademark, with the rhythm section going full hammer-and-tongs intercut with biting guitar stabs and horn lines that cut through the mix beautifully; a high energy introduction that’ll leave all listeners brimming with anticipation for what’s to come. For an album so long in the works, it’s not surprising that several tracks featured have been gig staples and fan favourites for some time, none less so than ‘Chase This Down’. The tune adds some extra bounce to the group’s sound with some delightfully skankable offbeats and scream-along refrains, and it’s a pleasure to hear saxophonist Evelyn Crabb get a moment in the spotlight with some guttural lead vocals towards the song’s conclusion. ‘Hacky Sack? Let’s Have A Rebellion’ showcases Lead Shot Hazard’s riff work once again, and the dual vocals of the chorus truly stir up the song’s revolutionary message. ‘Off Beat On’ takes a much lighter tone, taking a moment to lay down some fun ska rhythms while verbally paying homage to the many fine UK ska punk bands they’ve crossed paths with over the years, much in the same way Call Me Malcolm did with last year’s ‘All My Nameless Friends’ (on which Lead Shot Hazard also received a mention). It’s a short respite, however, as ‘Red/Blue/Black’ brings back the same driving energy and gang vocals that have made the album such a delight so far.

The next track brings with it one of the album’s highlights. A well-established feature of their live sets, ‘When The Daylight Ends’ has transferred brilliantly onto record. Whether it be the melancholy guitar lines, the distant thunder of the drums or the heart-wrenching lyrics, it’s a true testament to the band’s songcraft as the final phrases drift away into a desolate, rain-drenched landscape at the song’s finale. The vocal rapport between the two lead singers reaches a high with “The Best Horse Doesn’t Win This Race”, with the harmonies combining to produce some of the record’s most emotional moments. It’s at this point ‘Fires To Find…’ takes a more playful turn through the irresistible groove of ‘Rinse, Repeat’ and the almost jovial knees-up of ‘Braggin’ Rights’, while still maintaining the bitter social critique that has been an underlying theme of the album so far. ‘The Self-Obsessed’ find the band tapping into almost pop punk territory, a melodic lambast of those who can only look inward while the world crumbles around them, while the horns are the true heroes as they lead the charge through the attitude-laden stampede of ‘Move Your Mouth!’. While the run of songs from ‘Rinse, Repeat’ onwards are a solid set worthy of any decent ska punk album, they perhaps lack some of the urgency of the first half, not quite holding up to the high standard of some of the previous offerings. However, this is soon forgotten as the album’s closer ‘Between Hell And High Water’ kicks in. An intense behemoth of a song that has been the staple climax for many Lead Shot Hazard shows in the past, this track will have your feet off the floor and your fists in the air. There are times to skank, times to jump, and a chorus of whoas that will stay with the listener long after ‘Fires To Find Our Friends’ has finally drawn to a close.

If anything, a debut album so long into a band’s career can be an even more daunting prospect than for one in its infancy, particularly with a big lead up like ‘Fires To Find Our Friends’ has had. There’s a reputation to upkeep, and it’s a pleasure to reveal that Lead Shot Hazard have absolutely succeeded in all corners. There is something here for everyone across the spectra of ska and punk, and this record will no doubt propel the band on to more dizzying heights.

Lead Shot Hazard will be launching ‘Fires To Find Our Friends’ alongside Popes Of Chillitown, Just Say Nay, Last Edition and Paul The Kid at the New Cross Inn, London on Sunday 25th August.

Preview two of the tracks from the album here.