Launchbox: Forever Cult “The more we play live the heavier we tend to write things.”

Leeds and the North is dusting off it’s indie cindy roots and becoming a massive powerhouse of grunge, punk and hardcore. With bands like Marmozets selling out tours faster than you can drink a cup of Yorkshire Tea, we thought we should sit down with Clue Record’s own Forever Cult who are paving away for the new class of grunge.

Hello! We are well. Its bloody boiling in Leeds – rare and pleasant as it is, it does however mean I am externally more moist than usual. But then again it means it’s acceptable to drink throughout the day. Swings and roundabouts ey?

Tell us how you started as a band?

We met in Huddersfield. Kieran wrote some awesome music in his bedroom and Snowy came in on drums. I (Alex) came in at a later date when I was producing the first EP. And here we are now – almost two years later.

That’s hard to say – but I guess the main things that has influenced us has been the situation we’ve been in at the time. The more we play live the heavier we tend to write things. If we take time off for a bit, Kieran will write all kinds of different styles at home – we have plenty of cope to do a lot of different things, which is always nice.

Right now – I’m not sure really. But in the future it’d be great to be compared to artists who’ve had some great longevity in their music and their releases… bands like Deerhunter and Wavves etc But I’m setting the standard pretty high there! Ha.

Leeds & Reading was obviously a great thing to do and something of a bucket list moment. We feel like we’re ticking off a few bucket list things at the moment as we have news of upcoming things coming in which are really cool – like bringing out our first 7inch later this year. We can’t say too much about that yet but for people to be able to buy something we’ve written and recorded on vinyl is a seriously cool thing for us.

Where would you want to be in five years as band?

Still alive would be the first major thing ha. Who knows – maybe a couple of albums in?

All our Clue Records label mates, if you don’t know them, are amazing – AllUsOnDrugs, NARCS, and the newbies TRASH.

There’s an amazing Manchester band that we’re all really into called Flesh who are touring in September. You should all check them – seriously.

Colour Of Spring are from Leeds and are doing a few dates with us on our upcoming tour – they’re super cool. Oh and other Leeds band – Chaika. We played with them recently and they blew our heads off. So good. 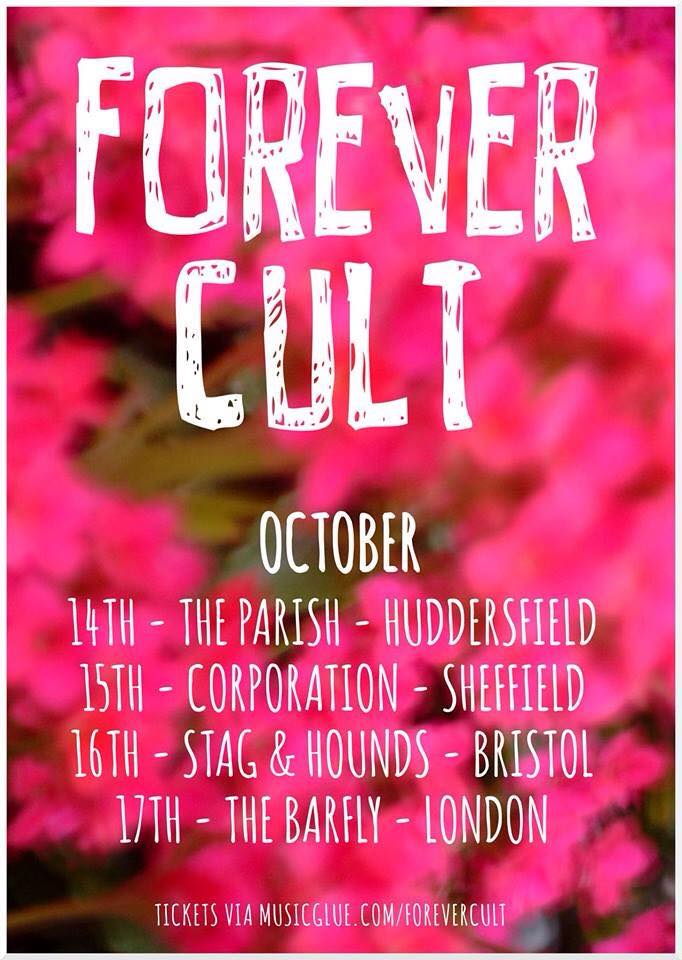 You can pick up tickets for them on our MusicGlue – http://musicglue.com/forevercult

Our new single, Antonio Banderas, is streaming on our soundcloud and you can check it out here:

Thanks for chatting to us! <3