Kevin Pietersen is the most talked about cricketer on the planet hands down. His recent dismissal from the England camp has left a division between fans of the game and the English game in particular.

Pietersen was England’s highest run scorer in the recent Ashes drubbing against Australia and would still easily be a key member of the England set up, but his past has caught up on him and the ECB management have decided to move on without him. This now gives him the chance to explore other opportunities in cricket.

Pietersen, now 33, has re-signed for the Delhi Daredevils to compete in the prestigious Indian Premier League for a fee of £880,000 (90m Indian rupees). This fee was the highest for a non-Indian player as Yuvraj Singh was sold for £1.37m (140m rupees) to join the Royal Challengers Bangalore and Dinesh Karthik, signed for £1,25m, who will be joining Pietersen at the Delhi Daredevils.  Pietersen is the only Englishman to be present in the IPL after 10 Englishmen were left unsold in two auctions. These men are; Ian Bell, Alex Hales, Ravi Bopara, Jade Dernbach, Craig Kieswetter, Simon Jones, Rikki Clarke, Luke Wright, Samit Patel and Dimitri Mascarenhas.

Pietersen has also signed a new contract to play for Surrey in their 2014 campaign. This leaves him open to play in the Twenty20 Blast tournament, and the four day County Championship and 50-over games. This is not just a boost to Surrey’s squad but is a big boost to the domestic game. There is no doubt that KP can draw in his star power to generate more interest in the game and therefore higher attendances around the country. I think there is nothing better than seeing a world class athlete perform at smaller venues and Pietersen is the epitome of world class. 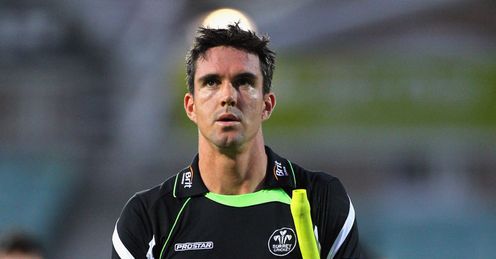 Pietersen will be entertaining the crowds at The Oval this year.

With Pietersen in Surrey’s ranks, they have a formidable squad if all players are available. They are captained by South African opener Graeme Smith who is a real big name asset to the league. They are followed by a crop of current and former England international players; Jade Dernbach, Steven Davies, Gareth Batty, Vikram Solanki and Chris Tremlett. This gives the former England skipper, a chance to prove the ECB’s management that he is still a player who can contribute to the Test and Limited Overs team.

KP can now be used to give valuable advice to the young players in and around the Surrey first team squad. He can give tips on the pressure of major international games, on how to play shots and how to keep their cool whilst at the wicket. Either way, Pietersen’s dismissal from the international scene could be a blessing in disguise as he is now in a position in the twilight of his illustrious career to help out the future of the game and the England team, whether he will or not is a completely different matter.

Personally, if I was the Surrey head coach, I would look at building my line-up around Pietersen and Graeme Smith as the opening batsmen as that is as formidable as you can get, especially at domestic level. It shows to the opposition that Surrey aren’t going to be messing about and those two are going to build up a strong partnership.

There is no doubt in my mind that a player with his skill and star power will shine in the IPL and in the domestic leagues, and the ECB knows this.