Haye Pulls Out of Fury Bout

David Haye has been forced to pull out of his heavyweight clash with fellow Briton, Tyson Fury, due to a nasty cut suffered in training.

The pay-per-view bout that was scheduled for September 28 at the Manchester Phones 4u Arena has reportedly been postponed with a new date yet to be confirmed.

However, Tyson Fury’s uncle and trainer, Peter Fury, claims they will not be looking to rearrange the fight.

“This has put a bad taste in our mouths so we’re moving on,”

“The fight will not be rearranged on our side.” he added. 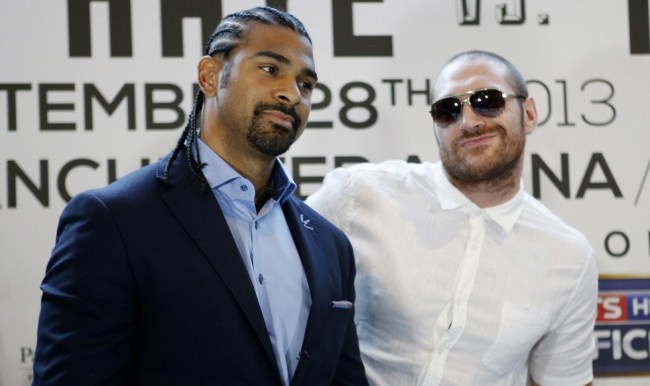 The former heavyweight and cruiserweight world champion suffered the deep cut, which required six stitches, to his left eye in one of his final sparring sessions of his training camp.

Haye’s sparring partners included former Wladimir Klitschko opponent, Mariusz Wach and heavy hitting American, Deontay Wilder, who boasts a 100% knockout record. It has not been revealed who caused the cut, however it is thought to have been a freak accident as trainer Adam Booth insisted Haye was wearing a head guard when the incident occurred.

In the build up to the fight, the Londoner seemed very confident in his condition as he claimed he didn’t think Fury would make it past two rounds but after reportedly being assessed by his doctor, was left with no option but to postpone the fight.

Both Haye and Fury have expressed their desire to earn a title shot against one of the Klitchsko brothers, but at 32 years old, Haye’s plans seem to have taken the heavier dent.