How England fans might spend £90 not on a recycled piece of polyester.

England football fans; master cynics for 95% of the year, but overtly optimistic come tournament season. It’s embedded in our DNA with 24/7 reinforcement from the press. You can just picture those Tom Cleverley selection petitioners if he scored the winner against Italy in Manaus. Cue hysterical jumping, fist-pumping and a flurry of new Cleverley songs. (See, I’m being cynical right now, too.)

But today, Nike and The Football Association have given England Fans sufficient ammo to be rightfully cynical, angry and disappointed, just a few months ahead of the biggest tournament in World football.

As you may have heard, the two footy powerhouses have jointly announced the new 2014 England Football Men’s ‘Matchday’ and ‘Stadium’ football shirts. The shirts promise England fans that it will ensure they “Stay Cool, Stay Dry and Stay Loyal” for the upcoming tournament in Brazil, evidenced in some rather cheesy Americanised product descriptions. The likes of Wayne Rooney and Steven Gerrard will be donning the shirts looking to end 48 years of hurt.

But the price tag has surprised and disgusted many, with RRP set at £90 for ‘Matchday’ shirts and £60 for the ‘Stadium’ version. The second worst aspect of the announcement is that April Fools Day falls tomorrow..

£90 for the new England shirt is taking the mickey out of the fans. When will it stop?

But let’s have a look at how England fans can spend their money more wisely for this summers tournament.

Alternative to the official matchday shirt is the do-it-yourself version with three easy, Ikea-proof steps. It saves England fans £71 pounds which covers three generous beer round’s for a group of four.
Step 1: Buy the Nike ‘Express Core’ T-shirt for £15-00.
Step 2: Purchase the England ‘Iron or Sew on’ badge from Ebay for £4-00.
Step 3: Get your nan to sew or iron the badge to the shirt.

If you’d rather spend nothing on shirts and go for the topless geordie look (if you wish). You could afford either; 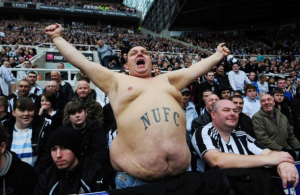 England fans! Let us know in the comment box how much you think an England Shirt should be!