Last Thursday I was invited down to a cozy looking bar in North London, along with some other journalists, to check out a motorized platform for virtual reality. I’m not quite sure what the others were expecting, but aside from the press release given to me, I was going in blind. A slightly delayed start later and armed with a diet coke and croissant, the presentation led by creator Elliott Myers began and I found out what the Roto motorized platform was all about.

As explained by Myers, and backed up by select clips from press interviews from the figureheads of Virtual Reality (henceforth known as VR), the platform aimed to eliminate some pitfalls that plagued the current VR devices in a relatively easy and cost effective way. As it stands, the barrier to entry currently into this market for a gamer is that of a next-gen console, so adding further costs onto it would serve to deter rather than entice. The areas being targeted were that of cable entanglement and more importantly, reducing the feeling of motion sickness brought on when using these devices. This last point is what really captured my attention. 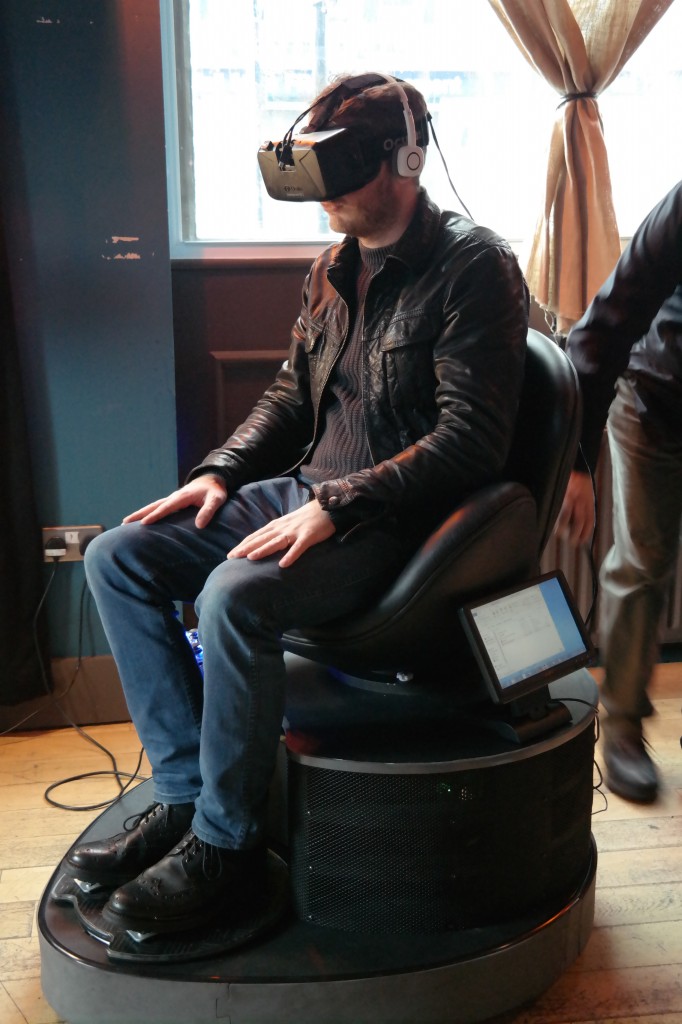 Another journalist sits atop the prototype version of Roto

The Roto device itself is a motorized chair base designed to fit most swivel chairs. Connected to this, is a small footplate that twists left and right, and in doing so turns the chair around. Twist your feet to the left, and the chair moves left. Right, and it moves right. Slowly twist them in a direction, and you slowly shift into that direction. The prototype version was at a fixed, “moderate” speed, and for the most part during the initial demo where I was thrust into space in a floating chair, felt comfortable.

The VR headset being used – the Oculus Rift – was connected to a pc mounted within the base, and I was reassured that the final product would not have this thus reducing it’s size. By doing this, it enabled the cable to rotate with the platform itself, and this eliminates one of the bigger problems with VR headsets – cable entanglement.

Palmer Luckey – founder and inventor of the Oculus Rift – stated that the (Oculus Rift)  was designed for a seated experience. Now, sitting someone down but telling them to explore by using their body to turn around and change the camera angles is slightly contradictory. Sure, you can turn around in your chair to look behind you, or scoot with your feet to swivel your chair around, but it’s either tiring to keep doing, or leads you to entangling yourself in a wire while blinded by a headset.

So as time passes and the novelty wears off, as explained by Myers, the cone of vision narrows and returns to one that is comfortable, which is a fairly limited space in front of you – but honestly this is understandable. People play games to relax, and having to crane your neck around or contort your body every few minutes to get a good view of everything is cumbersome and tiring.

Currently, the most common way you control your character in a first person VR experience is with a mouse, or using the right thumbstick on a controller. Doing this gives the sensation of the entire world turning while you look on from a first person perspective – it’s no wonder it can leave people on the brink of expelling their lunch across whatever or whoever may be in front of them.

The Roto aims to tackle this head on, and is one of its main selling points. It doesn’t do anything fancy, and once I realized what it did it was sort of an “ah ha!” moment. Instead of you manually turning your body around in order to turn the camera in the game, the chair moves you instead. So you move without actually moving. By doing this, you experience a more natural movement which reduces the nauseating feeling, and doesn’t tire you out from moving your body around trying to see the world in front of your eyes.

The initial demo I was treated to placed me on a chair floating in space. If I rapidly blinked, asteroids exploded in cheesy looking explosions, but that wasn’t the point. It was a testing ground to get a feel for moving with your feet rather than your hands. After looking around briefly just on my own, the motors were switched on and I was allowed to test out the chair’s true purpose.

So, I twisted my feet.

The chair rotated and it was reminiscent of being back on a ride at Disneyland. I was now in space (okay, I had to suspend my disbelief temporarily), spinning around and exploding things with my mind. Not a bad start to a Thursday morning. Admittedly, it was a little funny looking down and seeing my (virtual) hands stiff and locked in place – a point that was talked about by every journalist that proceeded to spin wildly in space.

The main feature came soon after – Alien: Isolation. To my dismay, we were informed that we’d be placed in a section with no enemies, but just so we get a feel for moving around a 3D space with our feet in more ways than just spinning on the spot.

It took a few hallways to get used to the idea that I turned with my head to look in a direction, and then twisted my feet to rotate and have my “body” follow my head. Just like in real life, where when we turn we look with our head and follow through with our body. It wasn’t the most natural of feelings, and it left me feeling as if I had tank treads on rather than legs s I barrelled through hallway after hallway, turning even faster and more precisely. I was made aware of the fact that the platform can turn at faster speeds, but for demonstrative purposes it was kept at a medium setting. Knowing that, I can see how the turning experience can be more human like rather than a robotic one with some further adjustments.
As the minutes crept by, I began to feel nauseous. Unlike regular control with the mouse/right thumbstick, it didn’t entirely put me off and instead just felt like something I’d become accustomed to with prolonged use. It’s a totally strange and incomparable experience to be moving under your own control with your body in something that isn’t real.

I took off the headset after feeling like a decent amount of time had passed, and fought the urge to sit back down again. It was quite disorienting to be thrust back into reality after rotating around for minutes, and I suppose that can’t entirely be avoided because of the way the human body works and the whole inner ear balance thing.

Would I do it again? Without a doubt. Personally, this is an exciting step forward in bridging the gap between the virtual world and reality. It makes exploration something you want to do because of how easy it is to move around the world, and I was left wondering about the uses in current games. Running around Skyrim in first person with my body leading the way was something that popped into my head immediately, and I briefly questioned why a more open world game wasn’t used instead of the cloistered, claustrophobic hallways of Alien: Isolation.

On the other hand, the inventors predict VR movies to be a big use of this tech, alongside games. Allowing a Director to control where the viewer is facing at any given moment leads to an exciting prospect of more immersive movies. While the hallways of Alien: Isolation weren’t the best testing ground to be spinning like a madman in, I can definitely see some form of this platform being used by filmmakers in order to get viewers to look around in a 3D space without tiring out the audience.

The Roto development team plans to launch a Kickstarter on March 12th, alongside their presence at EGX Rezzed in London on the same day. The motorized base without any extras is expected to cost less than £200. More info can be found on their website here.