If this appeals to you, then I applaud you.

In line with the old adage ‘if you can’t say anything nice, then you shouldn’t say anything at all,’ I reasoned that it was my role in life to support people, not to undermine them with needless criticism and unkindness, and that, therefore, as a critic – (a profession that by nature attracts unsatisfiable, bile-belching curmudgeons) – I would always do my best to find the best in every album or film to which I was exposed, thereby bolstering the artists involved, and giving them the confidence and freedom they require to explore their creativity to the utmost.

Watching a movie like ‘The Interview’ really put my commitment to this maxim to the test. The invective which such a tasteless movie readily inspires in me pours forth from me as naturally as blood from a wound. But, in order to stem the critical arterial flow before it threatens myself and the film I’m assaulting, I will apply the tourniquet of kindness to myself, and see how long I can wear it before it explodes from the pressure of the rising tide of my vitriol. For starters, it would be much too easy to lambast a movie as trashy as this, like shooting fish in a barrel, or nailing dead frogs to a dart board. And although I find it easy to refrain from such unlikely acts of psychopathic animal cruelty, withholding from lampooning such an insultingly bad movie is a habit much more contrary to my character.

But, I mean, the movie’s already been subjected to limited release, right? How much more damage could a few unkind words on my part do to a movie that has already grossed over $40 million dollars in online rentals? Whatever I say is only likely to intrigue you into watching it anyway. Profits margins will accelerate, and the head honchos at Sony will continue to be able to fund their taste for leather furniture and Kevlar sex dungeons. I live in a doomed world. Oh well. On with the review!

The second film to be directed by Seth Rogen and Evan Goldberg, the story follows Dave Skylark (James Franco) an imbecilic and narcissistic, insecure metrosexual talk-show host as he and his Producer (Rogen) are invited to North Korea to interview totalitarian dictator Kim Jong-un upon discovering that he is a fan of Dave’s television show Skylark Tonight. The CIA quickly seek to exploit this tender situation by proposing Skylark (accompanied by his Producer) attempt to assassinate Kim Jong-un by shaking his hand whilst wearing a ricin strip on the palm of his hand, which will release a fatal, time-delayed dose of poison into the despot’s body. Of course, none of this goes according to plan. Skylark’s ego is quickly seduced by Kim Jong-un, who wins him over with flattery, asinine American dude behaviour, his shared love of margaritas and Katy Perry, and by permitting him access to his artillery, private basketball court, and personal harem. Later, realizing he has been tricked, Skylark endeavours to reduce the supreme leader’s credibility by humiliating him on live television, reducing him to tears by singing ‘Firework’ by Katy Perry at him, and, ultimately, making him shit his pants. The movie concludes with Kim Jong-un being blown up in a helicopter, and Skylark releasing a best-selling book based on his experiences. 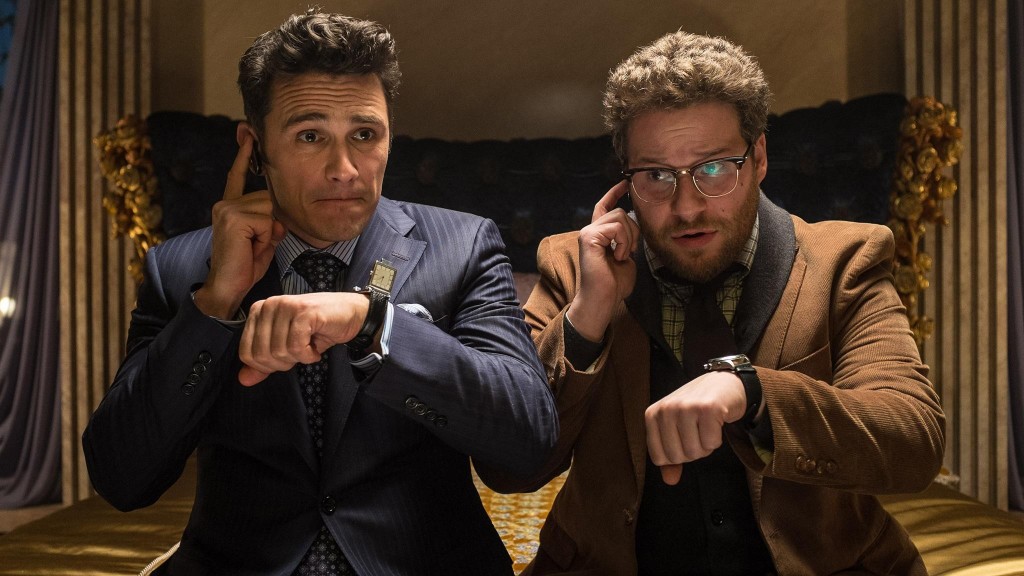 From outset, I would like to say this: I tried to like the movie. Honest, I did. I tried to like the endless dick and butthole jokes, the ‘so lowbrow it must be stuck in the cleft of your chin’ humour – I even tried to like Seth Rogen. How desperately I’ve tried to like Seth Rogen: with his gruff voice and ursine appearance, he has a lovable teddy bear quality to him; but, on inspecting the teddy bear more closely, you find that it has been eviscerated of most of its cottony innards and reeks with the hideous longevity of a drunkard’s piss. The man simply cannot act (or write a tasteful storyline for that matter) and his performances have all the depth and conviction of a painted swimming pool. He just can’t make me laugh. And whether he’s shoving a CIA missile up his rectum or having his fingers bitten off by a Korean TV executive, my humour muscles remain untested.
Franco, for his part, does act well, as does Randall Park (Kim Jong-un); and, in credit to Rogen and Goldberg’s directorial bedside manner, everyone does seem to be having terrific fun, as I’m sure I would myself were I be to be involved. But does a movie really need so many dick and butthole jokes? If these guys ever had anatomy lessons back in science class, they evidently didn’t get much further than the pelvis, and have been laughing heartily about it ever since.
The friends with whom I watched the movie praised it to some extent for touching on issues that few people will. North Korea is a sensitive subject and one few people will broach. And, in this respect, and I cede they are correct. But the intent of the movie is clearly not a political one. Rogen and Goldberg aren’t seeking to flag human right’s violations here. If they were, Franco’s moment of disillusionment would have come after stumbling upon a concentration camp in which many are tortured daily and in which the elderly and the disabled have drugs and questionable medical treatment practised upon them; not because he finds a fake grapefruit in an ersatz grocery store. Arguably, this would have been less comedic, but at least it would have had a trace of believability, reality, and humanity to it; all traits that a comedy as juvenile as this one desperately requires.
Dictators deserve to be humiliated and I defend the right of anyone to do so. But living, as we do, in a truly free universe, censorship and oppression are necessarily generated, for they are both different manifestation of the infinity of freedom. It also means dictators have the freedom to blow up anyone who makes an unfavourable movie about them, should they possess the arms. The distinction here is a matter of quality, for ridiculing dictators is nothing new. In his 1940 comedy The Great Dictator, Charlie Chaplin did the same to Adolf Hitler and made him out to be every bit as buffoonish and pathologically sensitive as Kim Jong-un is in this movie: the difference is, he did it well. Charlie Chaplin, Buster Keaton, Harold Lloyd, The Marx Brothers, Peter Sellers – all of these seminal comedians and actors were willing to risk their lives for a good gag, and their zeal, perfectionism, finesse, and self-mastery were exhibited in everything they did: most modern comedians are only willing to do whatever cheap trick will be guaranteed to get them a laugh quickest, by pandering boring shock humour to a public so apathetic and benumbed that only sexual innuendo and collegiate infantilism will wake them out of their media-propagated comas.
Like I said earlier, it’s all a matter of taste, and if this appeals to you, then I applaud you, as my own predilections are prehistoric in comparison. But, within the confines of this article, I am the dictator, The Supreme Leader of the People’s Democratic Republic of Quality, and I sayeth:
It Stinks.