I really began to question whether the directors were warning against the hazards of humanity’s excesses, or actually showing us their idea of an ideal future.

Admittedly, this was not my most successful film viewing venture. I had not realized prior to arriving at the cinema that our screening was to be in 3D, and, unwilling to wait another two hours until the 2D screening, I reluctantly agreed to watch it in this medium, but petulantly refused to pay extra for the 3D glasses, figuring the movie would look visually ruinous either way. I’d rather have my eyes battered and fed to a CEO than kowtow to this tawdry gimmick which refuses to die.

Why any filmmaker of worth would choose to have their film offspring bastardized in this way, I do not know, but to quote ‘Ride Wit Me’ by the great scholar and rapper, Nelly – “Hey! Must be the money!”

Instantly this acknowledgement should have put me on edge – but I was sanguine; I had high hopes for the movie. As soon as I had seen the advertisements, I had hungered to see it. Featuring, as it appeared to, a multi-level plot of intergalactic conspiracy, a la David Icke, and revelations regarding ordinary people with extra-terrestrial identities – (two things for which I am both a sucker, given my long-held belief that I am a denizen of a reality far removed from this one) – I was determined to see it; and following my watching of The Wachowskis’ previous effort ‘Cloud Atlas’ – a truly monumental movie about reincarnation beautifully depicting the interconnectivity of all time and space – I threw all of my reservations out of the window. But as expectation and excitement are the mothers of all disappointment, I would spend much of the movie trying to claw them back.

Through double-vision and bleeding eyes, this is the plot line as I understood it. Jupiter Jones (Mila Kunis) is the ostensible daughter of an extended family whose job seems to mostly consist of cleaning toilets for the well-to-do.  Discontent with this allotment, she begins and ends most days with a hearty ‘I hate my life’, until she is saved from a failed assassination attempt during surgery by Caine Wise (Channing Tatum), an ex-military hunter, who is half-albino, half-wolf. He informs her that she is the reincarnation of the matriarch of a long-living space dynasty who owe their longevity to their practice of seeding planets, cultivating them to a state of full capacity, and then harvesting them to produce a bounty of elixir that will restore to youth all  who bath in it. Within this context, Earth is just a minor – but desirable – estate, coveted by her millennia-old children, who have planned to kill her so that her rebirth does not spoil their inheritance. Jupiter assumes the title of Queen of Abrasax, is continually courted, duped, and manipulated by her progeny, who assay to get her to  relinquish her ownership of Earth. She succeeds in foiling them, but returns to her ordinary, earthly existence, content to clean toilets forevermore.

Despite my diplopia, I can at least say that the aesthetic of Jupiter Ascending is somewhat unique; its sprawling space cities Byzantine and Baroque in style – even if its execution lacks the same elegance and complexity. The Wachowskis seem much more interested in seeing how many stuntmen and Special Effects experts they can get out of the unemployment line, than actually advancing a plot so potent with possibility. Indeed, there are so many interesting different avenues they could have taken it down that I almost tricked myself into thinking I was being entertained by entertaining these possibilities myself. But this technique did not work for long. The directors just seemed to be determined undercut themselves. Any time a dialogue or concept-iteration scene began to get interesting, it would be immediately intercepted by yet another long chase sequence or special effects orgy. There are so many of these throughout, in fact, that I’m sure if you were to excise all of them from the movie, the remaining motion picture would only be forty-minutes to an hour in length.

One such example is a great scene in which Sean Bean (a former military partner of Tatum’s) gives Mila Kunis a revisionist history lesson, explaining the history of the Earth from the perspective of the galaxy-monopolizing aliens who seeded it. This moment had me fixed; but it lasts barely more than thirty seconds before – WHIZZ! BANG! PEWW! PEWW! – the stuntmen’s tea break is over, and the CGI debauchery is resumed. Another great moment that lasts all too briefly is a sequence in which Jupiter, seeking to authenticate her royal heritage, must spend a whole day traversing an interminable series of intergalactic bureaus, with a fully-programmed Bureaucracy-Bot to guide her way, before she ends up in the grim, Dickensian office of the seal minister (cameo: Terry Gilliam) who can do so. The Kafkaesque comedy of this moment was so enjoyable that it almost convinced me that the calibre of the movie would improve exponentially from here on in. 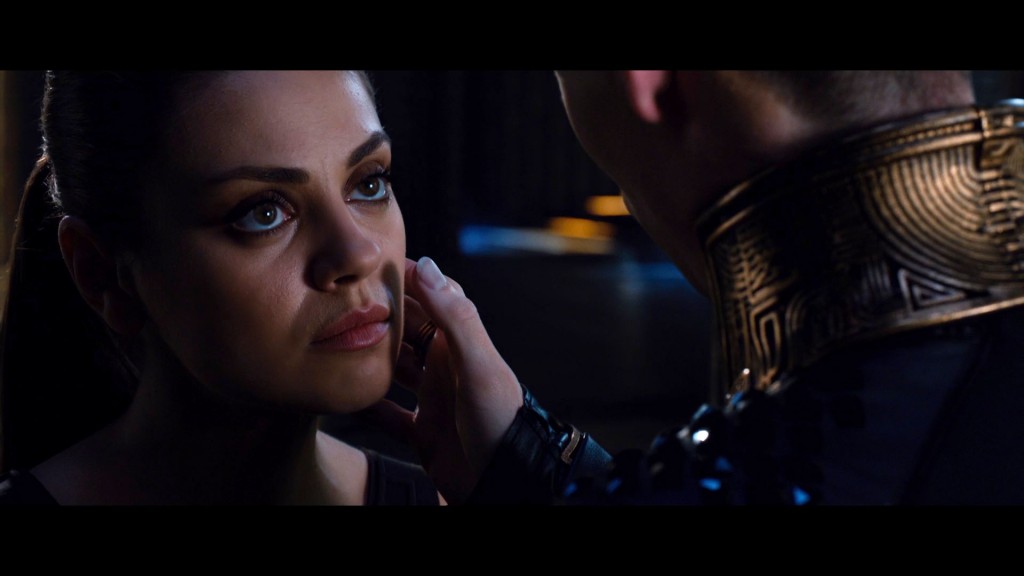 Most of all, I feel sorry for Mila Kunis. It is pretty clear that The Wachowski’s were too busy fellating the stuntmen to offer this poor flower any direction. At no point during the movie does she evince any idea of who her character is, how she’s meant to be feeling, and, most of all, how she’s meant to react. She witnesses her friend get abducted by an alien, and doesn’t even bat an eyelash; a genetically-modified human being informs her that she is the monarch of a magnificent space empire and she seems barely conscious that she’s meant to be shocked; she discovers that the population of the Earth will one day be harvested like cattle, and she just about manages to conjure up the most meager portion of distress you’ve ever seen this side of Keanu Reeves. The only times she seems genuinely as ease are during the romantic sequences with Caine; though, once again, the directors are too distracted to capitalize on the chemistry and tenderness betwixt them. It says a lot about a movie when you can honestly say Channing Tatum gave the best performance.

The greatest strength of Jupiter Ascending lies in its depiction of what happens when the capitalist, resource-based philosophy that currently dominates our planet is enacted on a galactic scale. Selfishly, we rape the earth and neglect those around us, thinking only of short-term gain; whilst those who created us plunder as many planets as they can all in the pursuit of limitless wealth and eternal youth – greed and egotism evinced on a microcosmic level. But as the movie wore on, and these issues were marginalized in favour of explosions and battling Reptilians. I really began to question whether the directors were warning against the hazards of humanity’s excesses, or actually showing us their idea of an ideal future.

As I left the cinema, my girlfriend said:

“I knew it would be Hollywood,” to which I retorted:

Forgive me. Nothing consoles the disappointed quite like a good bad pun.