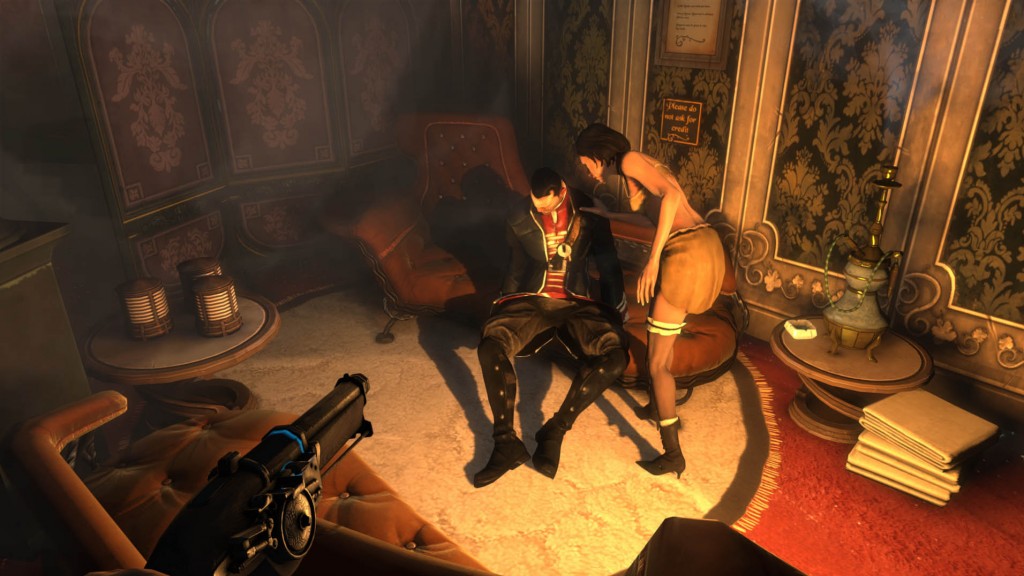 Arkane Studios deserve immense credit. Their one game since 2002′s ground-breaking Arx Fatalis divided critics, and two projects since had been put on the back-burner. Former Deus Ex director Harvey Smith had disappeared from the limelight, much like his partner Warren Spector. As with Deus Ex, the studio was going to have to reinvent its own craft. And with backing from Bethesda, it would do so on the grandest stage possible.

Even without taking their tumultuous history into account, Dishonored is a triumph. It’s an epic amalgam of the best action and stealth titles of the last fifteen years; all fluidity, patience and craft. It’s a title which bridges the traditionally gaping chasm between PC and console, and does so in the face of fellow blockbusters which have no more in common than their stature. And in some respects, this is its shortcoming.

The game plants you in the shoes of Corvo Attano, bodyguard and advisor to the Empress. If you know anything about the game – and it has been out for a month now – you’ll know that she’s soon assassinated, and Corvo ends up taking the fall. Busted out of prison in a sequence evoking The Witcher 2, he is delegated equipment and mysterious powers to help him dole out some justice.

If the storytelling in this opening segment is underwhelming, you do at least get a fantastic sense of your city surroundings. Dunwall is a sprawling homage to Victorian Britain – with a few notable mod cons. In a panel I attended pre-launch, creative director and former Valve employee Viktor Antonov was at pains to stress that the world isn’t ‘steam punk’. Envision Nineteen Eighty-Four and you won’t be far wrong. The game’s whale oil powered contraptions, visual marvels in themselves, are used to enforce martial law upon a plague-stricken populace in near dystopian surroundings. 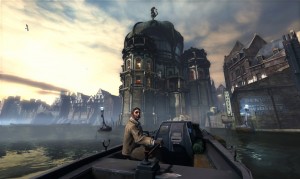 As you would expect from the architect of Half Life 2′s City 17, design is one of Dishonored’s strong points. Landscapes are somewhat inhibited by the hardware, but the real beauty is in the details. The washed out palette of the riverside gives way to towering, textured architecture, all decked in posters. Each guard’s uniform is a splash of colour against the cobblestone. Character design throughout the game is fantastic; features are accentuated, bordering on caricature. A city dwarfed by the river which carries you between missions opens up to a labyrinth of streets and buildings within them. Part of the joy of exploring the environments is simply admiring them.

And explore you shall. Every area is essentially linear – you have to get from your starting point to a target – but the means by which you can get there are hundredfold. Levels are both expansive and incredibly polished. The game never seems to shepherd you down a particular route, something Deus Ex and its successors could be accused of. Scenery seems deliberately placed, so that it often feels you are retracing a developer’s steps, but sprinting, leaping and ‘blinking’ over a set of railings feels so unscripted that you wonder if they ever thought of it. The game’s propensity for trial-and-error makes it incredibly engaging. Suspect guard AI sometimes pulls you out of the action (one incident saw a guard abandon his search for me after a few seconds, having set three of his friends on fire and hidden behind a crate), but with the myriad different means to subdue or skulk past them, it almost doesn’t matter. 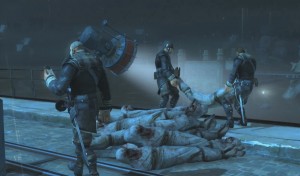 Dishonored’s mechanics are a big part of what makes it so immersive. Corvo has none of Ezio Auditore’s litheness or agility, and combined with the relentless focus on stealth this makes for a breathless experience.  By default the camera shakes as you move, emulating disorientation. You will spend as much time sprinting, leaping and wrenching yourself up onto ledges as you will tiptoeing above unwitting guardsmen. Let them spot you, and you may end up in a sword fight. It is rare for a game to have such extraordinary depth of combat, let alone for it to be this well realised. It is almost unheard of for a game to combine this with such wonderful stealth gameplay. Blink, the first power granted to you by the mythical Outsider, is an absolute godsend, allowing you to teleport behind guards to catch them unawares, or make a quick, often vertical getaway. It works so well, allowing such speed of movement and easy repositioning, that you’ll wonder how you ever snuck about without it. Add the agility boost and obligatory infra-red power (and time stop, if you’re feeling cheap), and you’ll be nigh-on invisible. There’s actually an achievement for never being spotted.

“sprinting, leaping and ‘blinking’ over a set of railings feels so unscripted that you wonder if they ever thought of it”

But where’s the fun in that? If there’s one problem with stealth games in general, it’s that there aren’t enough ways to subdue people. Here, choking and sleep darts simply pale in comparison to the wealth of attacking options on display. You can burn people, have them eaten by rats, launch them off buildings, knife them from above, blow them up, have them vaporised, shoot them, or just have a good old fashioned sabre rattle. Combat is tense and weighty, with the onus on swapping between weaponry and powers on the fly to maximise efficiency. Sword duels have blocking, blade clashes and stagger worked in to liven things up. Despite playing a low chaos, largely stealthy run-through, there were times when I couldn’t help killing a room full of people. And I got achievements for it. Throw in some excellent sound design and you have a concoction for gleeful violence. It’s a game which necessitates multiple playthroughs, though not all the reasons are positive. 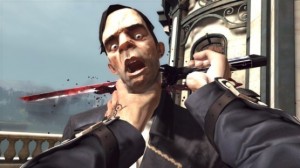 The caveat to the wonderful combat is how the game actively punishes you for it. Not only do later levels get significantly harder, you’ll also get the ‘bad ending’ if your chaos rating is too high. As morality systems go it’s pretty inoffensive, but encouraging one play style seems to go against the whole ethos of the game. As someone to whom stealth is an interesting secondary challenge, I feel like I enjoyed things far less than I would have gunning through, but felt pressured to limit my kills for the ‘proper’ ending. Stealth is such an integral part of the game that you would end up doing some of it even on a kill run for pure convenience; you can’t take on entire patrols at once. But I would have liked to silently eliminate them one by one, and I just couldn’t. In one level your mission specifically wants you to kidnap a scientist, who you find has been deliberately infecting people with the plague in order to study them. He callously admits on tape that the victim you free will only live another day. Should you save him, he winds up as an ally with nary a mention or hint of comeuppance. It is one of a few, underdeveloped glimpses of real darkness and debauchery in a game which promises so many.

The decision to rank chaos was clearly taken to play into this narrative, and maybe I wouldn’t have minded as much if it was any good. While the background and setting are strong, Corvo’s tale is decidedly uninteresting, and the vast majority of supporting characters perplexingly bland. Much money was evidently expended on A-grade voice talent, but only Chloë Moretz’s young Empress truly shines. Antonov explained the decision to use generic American accents as necessary to broaden the game’s appeal, but it seems baffling when he and art director Sebastien Mitton drew so heavily on London and Edinburgh in creating Dunwall, not to mention the plethora of popular shows with regional UK accents (Game of Thrones, anyone?). The class divide, so visually evident between levels, is misunderstood and seldom developed within the story. Your upper-class ally, a Member of Parliament, has a vague semblance of a personality, and says markedly little of the city and people he presides over. You’ll meet with him and your other cohorts after every level for tedious and distracting exchanges of dialogue, yet back story of genuine importance and interest is doled out between dozens, if not hundreds of in-game books. Fair enough in the Elder Scrolls, a game which revels in its enormity and allows the player time to sit and read, but in an action-FPS this just seems lazy. The contents of the books would have made a more interesting story than the story. 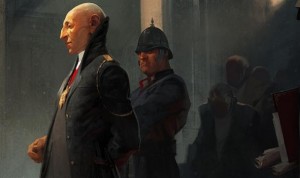 But then you get back to the levels, and you remember what Dishonored is all about. You run, jump, explore, sleuth — and kill. There are easy ways to your targets; shooting a guard on a balcony to draw their attention, and summoning a gust of wind to take care of the rest. Or there are ways which involve twenty minutes of crawling through vents to rig a gas explosion. The levels are their own stories, and you have almost every freedom to shape them. Judged as a game, it’s an absolute marvel, but with a blockbuster title like this you expect more than a tactile experience. Judged as interactive fiction, it’s ultimately an admirable failure.