Review: Crypt of the NecroDancer 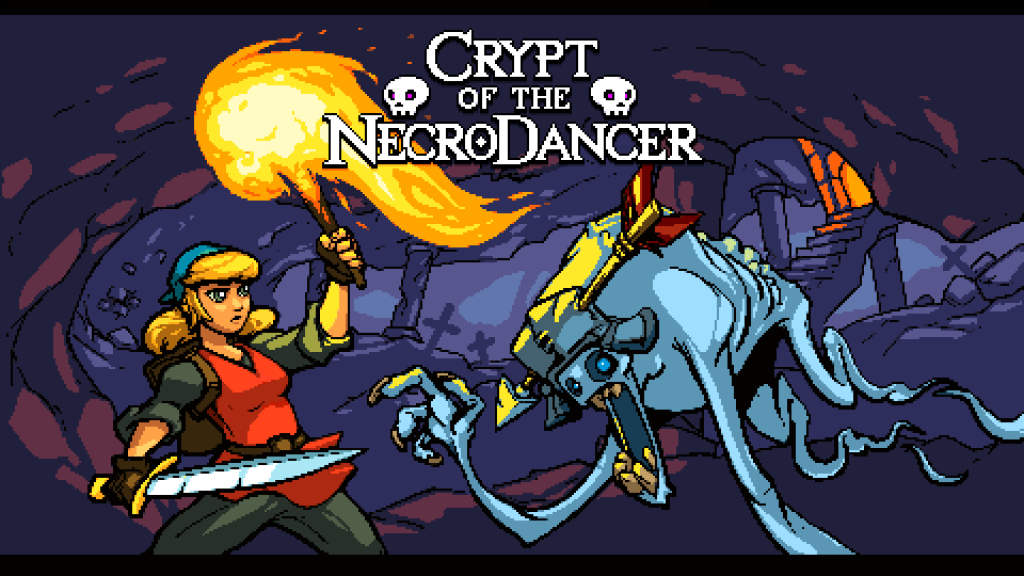 Pixel art, retro music, randomised dungeons and dancing - what more could you ask for?

I was skeptical at first, and did judge a book by its cover (or in this case, it’s name), more so by the sizeable download of it, which I cried out in incredulity upon seeing it. Loading it up, I was presented with an oddly groovy soundtrack blaring through my speakers, and a retro intro movie to boot, which promptly thrust me into a tutorial.

Now what sets this game apart, beyond anything else is its inclusion of Rhythm into its core gameplay. There’s a heart displayed at the bottom center of the screen, and vertical beat bars that move toward it. You simply hit an arrow key (or any action) when the bar lines up with the heart, just like in any other Rhythm game. Sounds simple, right? We’ve all been there, when you get in the zone in Rock Band and everything outside of the fret board fades away.

Except, you can’t do that here. Sure, you can just solely focus on keeping your internal tempo going so you can move around properly, but you also have to avoid traps, fight enemies (and bosses!) and do otherwise menial tasks while keeping this in mind (like buying upgrades, or using items). This then takes the game from something simple, to being something that outwardly looks simple while hiding its true difficulty.

Welcome to Crypt of the NecroDancer. 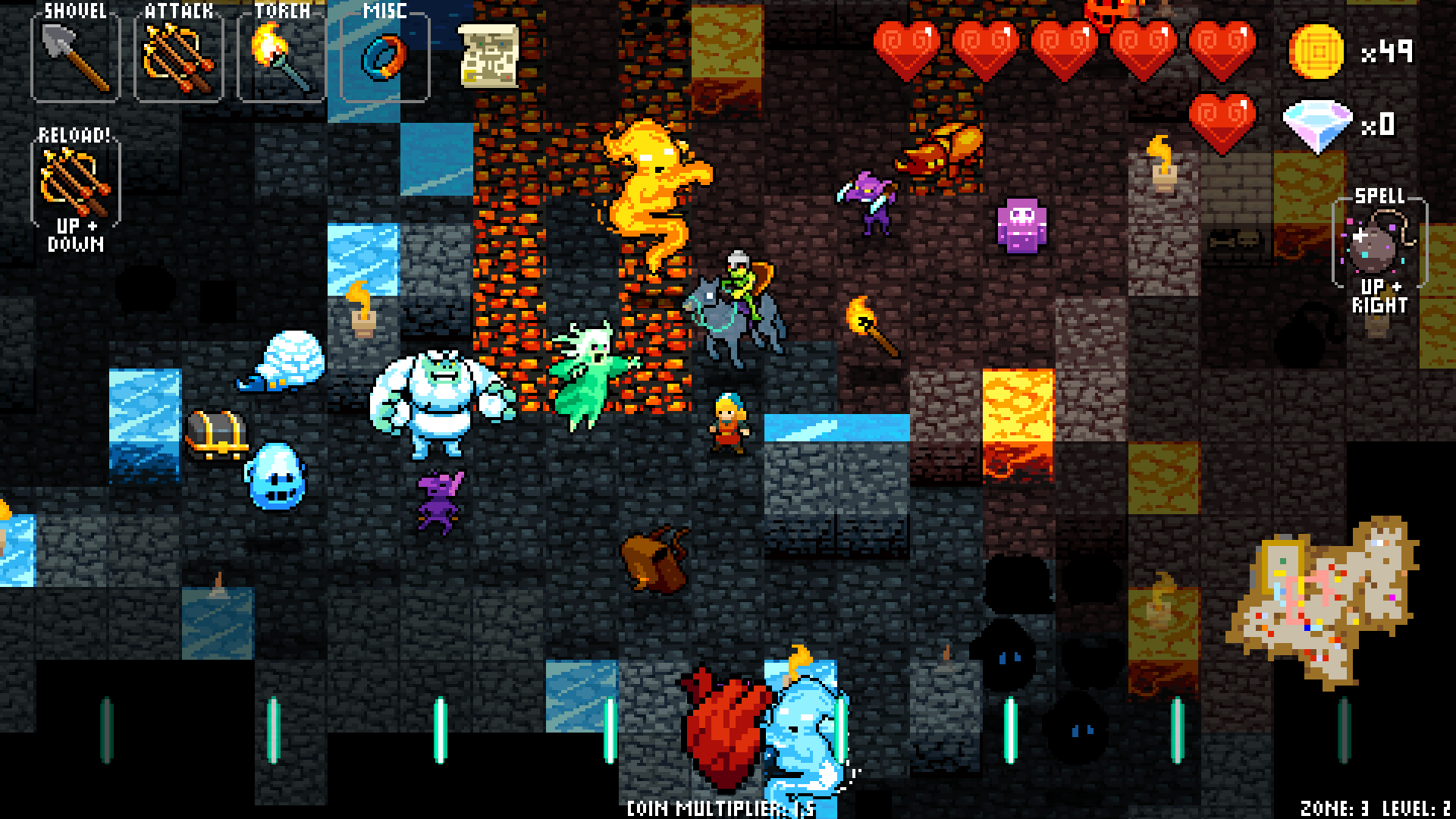 A Roguelike by any other name would still be called a Roguelike. I think. That analogy works well with roses, so I’m just going to modify it and hope for the best. Roguelikes are a genre that prioritizes random dungeons, permadeath, and difficulty. Sure, it has variations just like any other genre, such as having pixel/retro graphics, or being turned based, etc. but this game checks all the boxes and as well as making some of its own.

The setting is simple: A fresh adventurer ignores advice and pokes her head in places where it doesn’t belong, digging around in graves and eventually causing a sinkhole to open that leads her to fall to her death. Only, she doesn’t die. The NecroDancer steals her heart, and she’s now on a mission to get it back in the only way she knows how – DANCE BATTLES! I mean, Rhythmic Combat!

Once you’ve gotten the hang of moving to the beat of your heart (quite literally), combat awaits, and with it the rest of the game. Beat based in nature – in that, enemies move to the beat of the song/rate of the bars passing over the heart on your screen, rather than as a result of the player leads to having to manage a lot of different patterns in your head. Keeping an eye on your own rhythm and pace, staying calm, and then also thinking about enemy movements and patterns can lead to some quick mental overheating and an even quicker death. A variety of weapon types allow for different ways to attack and interact with enemies in the game world, allowing for some appreciated variation in the combat styles, but at the same time forcing you to have to change your tactics on the fly to compensate while staying in time with the beat.

Speaking of changing tactics, the game also has a multitude of unlockable characters that change the way the game plays. For example, one character removes the beat bar entirely making it more akin to a traditional turn-based game, and another has no weapon but uses his stash of (unlimited) bombs that he can kick at enemies to deal damage. When you think the game’s getting a little stale, you can just change characters and freshen things up again in a meaningful way. 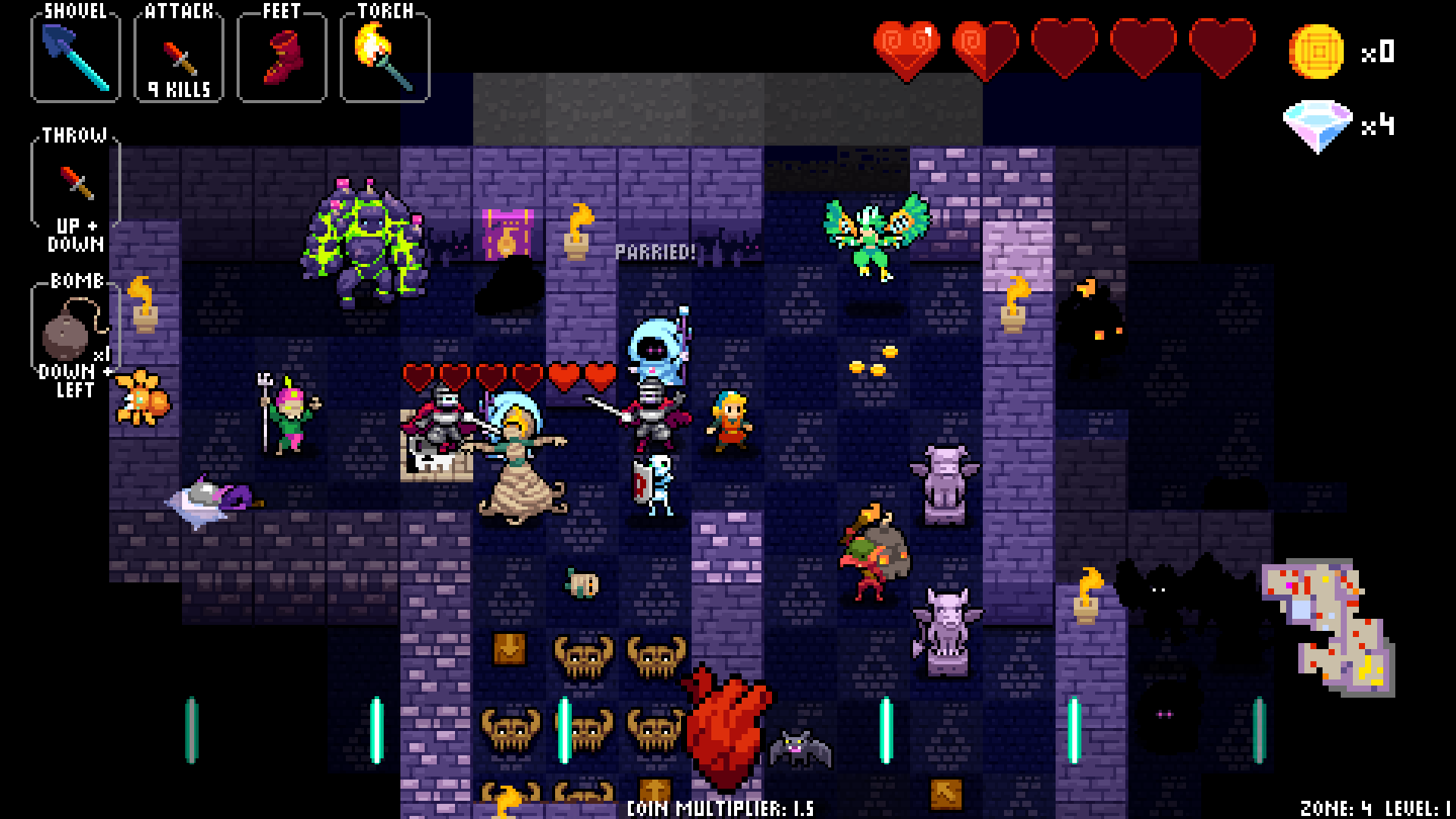 Of course, there’s no direct penalty to missing the beat or sitting on your thumbs in a safe location temporarily, but doing so resets your coin multiplier (thereby reducing how much money you’ll collect till you kill enemies to get it back up again), as well as the main thing being each song has a duration, and when it runs out, you’re forcibly dropped to the next level (also resetting your multiplier).

The game opts for a pixel art style, which may not appeal to everyone, but it handles it with enough care that it’s not jarring to the eye when viewed on higher resolutions. Complementing it is the game’s music – a decidedly retro soundtrack that spreads across multiple genres including electronic, rock and synthpop. Considering how much the game is based on music, the songs produced for the game mesh well with the overall theme and don’t detract from the experience, but rather enhance it. However, if the music is not to your liking, it also supports the ability to include your own mp3s and listen to that instead while you plunder the underground looking for your heart.

As an added final note, and something I found actually pretty cool – the game supports dance pads. So yes, if you have a DDR (Dance Dance Revolution) mat lying about that you can connect, you can go nuts playing this game with it – plus the game’s floor lights up like a dance floor when you start building up your coin multiplier, making it even more fitting. It makes me want to go buy one just to try it out (can I call it exercise?).

Crypt of the NecroDancer is a unique spin on the Roguelike genre, and a very welcome one at that. Just when things were seeming to become normalised and the dominant games of the genre established, out comes this gem by the team at Brace Yourself Games that has more than earned the right to be up there with them.

Crypt of the NecroDancer is out now on Steam for Windows, Mac and Linux – click here.