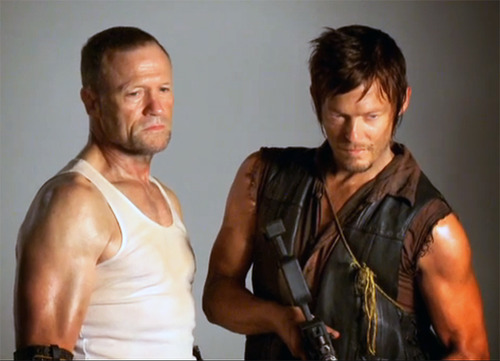 With the America just getting over how amazingly spectaclor the mid-season finale of The Walking Dead was, and Britain about to enjoy it for the first time tonight on TV, apparently our favourite red-neck brothers are going to appear in a video game together. And you thought today couldn’t bring any more win.

It has been confirmed that Norman Reedus (Daryl) and Michael Rooker  (Merle) will be lending their voices to for the new The Walking Dead video game. The game is to be called “The Walking Dead: Survival Instinct”  which is going to be a prequel of the infamous AMC show. We are going to be treated to seeing how the brothers coped when the outbreak first happened, and we will be able to play as the two as they make there way to Atlanta.

Unlike the previous The Walking Dead game created by Tale Games, this game is in the process of being developed by  games company Activision.

“Our goal is to shape Daryl authentically, chronicling everything that happens to him from the initial Wildfire Global Outbreak until he joins with Rick Grimes’s group at that quarry near Atlanta,” explained Drew Haworth – creative director with developer Terminal Reality – in a statement.

“And on the way, we’ll reveal a couple of our own interesting back-story surprises that fans haven’t already gleaned from the series”.

A release date is yet to be confirmed.