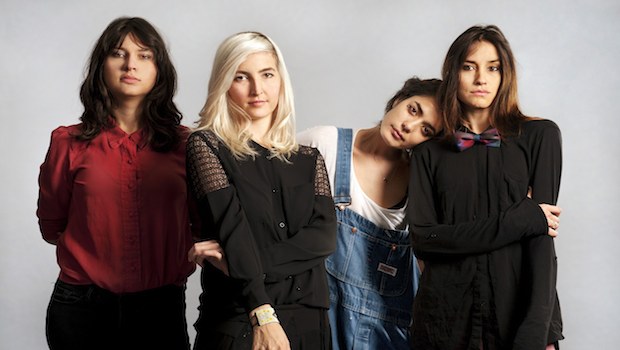 The Los Angeles four-piece had come under scrutiny following an interview with Q magazine, in which the band allegedly referred to Rihanna and Beyonce as “sluts”.

Indie band Warpaint have apologised following an interview with Q magazine, in which the group were quizzed on the sexual nature of pop music. Speaking to Sylvia Patterson, Theresa Wayman from the band was apparently critical of the “hyper-sexual” of mainstream pop music, and the ways in which certain female artists have decided the frame themselves, particularly R&B singers Rihanna and Beyonce Knowles:

“She [Rihanna] has an insane voice, she could’ve done something so much more stuble and artful”. Wayman continued: “It just gets worse… Every song on Beyonce’s last album has her basically looking like a slut and she does not need to do that. She’s gorgeous and so fucking talented. And they all take it as women’s liberation!”.

Following the interview, Wayman has since apologised on the bands official Facebook page, stating that she was “careless” with her words. In addition, Wayman reiterated her love for both Rihanna and Beyonce and their music. Expanding on her previous comments, Wayman declared that there comments were directed Beyonce’s video for “Superpower”, rather than the singer herself, where she felt that “her [Beyonce] role in that clip undermined the song – which is one of my favorites. That’s pretty much it. As a fan I was confused with her choice to sexualize herself in that particular moment”.

First and foremost, I want to apologize with regards to the Q article. There were many long conversations behind that statement and it’s heartbreaking and painful to see it presented in such a hyperbolic and crude manner. We LOVE and ADORE Beyonce and Rihanna, genuinely, and that’s what makes this all the more difficult.

A journalist came on our bus and casually asked us what we thought about women in music and we responded as fans and consumers and not as card carrying feminists. Not as anybody with power or influence either. We’re not trying to start a war, no fucking way. We would be crushed like little lady flies.

As we all know these days, sound bites and quotes are chosen not by their merit but by the level of sensationalism and that’s exactly what happened here. Beyonce and Rihanna are the last two women on earth who I would ever want to disrespect or disregard. Ultimately I am a consumer too, and everybody expresses their opinions about the artistic climate they live in. What I was referring to, specifically, was my take on the video clip for “Superpower” where I felt her role in that clip undermined the song – which is one of my favorites. That’s pretty much it. As a fan I was confused with her choice to sexualize herself in that particular moment. On the other hand “Drunk in Love”, in my humble opinion, is so powerful in it’s sexuality. I could watch that on a loop forever. Ultimately she can do whatever the fuck she wants. Anyone can. I’m a fan and like any other fan – I have my opinions which are no more or less important than anyone else’s.

As far as Rihanna goes, if I had that voice I could die right now a happy woman. The journalist and I were discussing a hypothetical situation in which Rihanna was an artist active outside of the mainstream music scene. What would her music sound like? What would she wear? What decisions would she make? PURELY hypothetical.

There’s not a shred of self-importance in these words. I’m not trying to cover my tracks but this is really upsetting to me. I apologize for being careless with my words. I apologize to fans of Beyonce and Rihanna, I fucking love them too. Me and and my big mouth.

p.s. I never said shit about twerking…don’t know how that got in there. By all means, twerk away.

Warpaint released their second and self-titled LP earlier this year, and will be featuring on the bill at this years Field Day Festival in London on the 7th of June, and Parklife Festival in Manchester on the 8th of June.