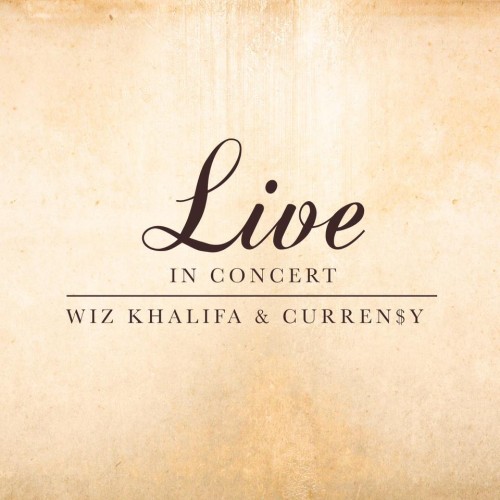 Alright. I’m just going to get straight to the point here. I’m listening to this on a 420 release date, so you know this is going to be a fair, concise and consistent communication about what we are going to discuss. This collaboration, is simply sick. Simply put.

I’m going to break it down for you with these categories: lyricism, instrumental and replay strength. Pay attention.

If you are a fan of the duo, you should know both Curren$y and Wiz are simply no doubt the best at what they do. The Jets Go Man has been ill since he ditched The Cough Syrup Addict and friends in late 07′. Fantastic move. As far as a catalogue of music goes there hasn’t been one I haven’t designated to play on blast, cruising with my windows down in the summer. Portraying his love for muscle cars and blowing weed smoke , everything Curren$y depicts on this tape feels like something you can relate to.

A nice change from the braggadocio you often find too frequently in some hip hop releases. Live In Concert, thankfully isn’t one of those. I’ve also always been a fan of Wiz ever since his Show and Prove days. Don’t even get me started on Kush and Orange Juice, easily in my top 10 favourite releases. I gotta take the time here to say though, I don’t know what Rolling Papers was. I think I got to something like track 3 and just deleted it. That being said, Wiz just likes to experiment and I respect that- O.N.I.F.C was a sweet album, still playing it now. Flow and content wise Wiz has moved past just weed talk, to now bragging about being able to splash out like Boris Johnson belly flopping in a swimming pool.

Of course Wiz is effective when doing so and you get to hear the good ol’ Wizzle man complaining about his hands cramping because he rolls too many joints in between self-commentating his style. It works very well alongside Curren$y’s lucid depictions of somewhat similar notions, but the presentation of it all is just something to enjoy from both rappers. So lyric for lyric everything is legit. Flow wise, both artist are noticeabley different. However I can appreciate them both on the basis of their own strengths and style so everything is legit there too. Saying that I just have to mention that Landing is an absolutely crazy track. Curren$y’s flow is seemingly unleashed and displays something ridiculously attention grabbing. Instant rewind on initial play through for that one.  But everything in the lyricism department of this EP checks out absolutely.

Now the only thing that can effectively accompany visuals of waking up next to a beautiful girl after blowing o’s the night before, is suitable place setting via atmospheric music. Over the 6 tracks, we are blessed with just that. I always struggle to describe instrumentals exactly how I perceive them, so the best I can give you in relation to this are the following disjointed words and statements- silky, thematic and soul-esque, soft piano keys, riveting uptempo melodies. Essentially every beat is rich in its own context, you get the sense that one or two of them could be a score in a 70’s TV film chase.

The use of sampling is top notch here and while I can’t put a finger on any originals just yet, the follow up choruses utilised at the end of some tracks after whichever rapper is finished encourages you to just enjoy it as it fades out just as strongly as it began. What works very well with each instrumental are the fantastic choruses delivered by the duo. Everything sits neatly and charismatically and you can’t help but think they were high when getting down to lacing this. Well lets face it, they probably were. In which case I am very happy they were. I am also very happy to hear Wiz on these sort of beats.

His delivery on Revenge and Cake for example was exactly how I would have wanted him to approach it. Curren$y has been destroying some spectacular sounding beats for some time as fans know, so I have long hoped to hear a partnering like this on instrumentals like these as opposed to the general hard hitting kick and snare. So this category is also a win.

As this is an EP, its a small gift. But a magnificent one just the same. So essentially, *in Yoda voice* “Replay factor is strong with this one.” I mean as I’ve typed this, its probably played through 5 times now and I’m still leaning back and nodding along. It all just feels like a wonderful theme setter for the sunny day ahead. Perfect drop for 42o, they knew precisely what they were doing with this. No complaints from me an easy 5 for a trill (true/real), and consistent EP.