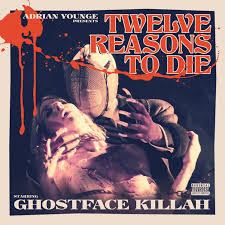 When I first heard there was going to be a new Ghostface album I exclaimed, “sweet!”. When I discovered that said album was going to involve a partnership with Adrian Younge, I felt overwhelmed like a diabetic in a candy shop.

Now I’m going to assume you are reading this review with a somewhat basic understanding of who The Killah is, therefore I’m going to skip over a pointless historical introduction, (I mean come on, he’s from Wu-Tang, who doesn’t know about Wu-Tang?). Adrian however, is a different matter altogether being fairly unknown unfortunately. I know for a fact many of you right now are thinking “Who is this guy? I thought he was just a random fella who’s name was just thrown on the album cover”.

Well you are wrong. Very wrong. If you want to assess his work prior to this audio presentation, I have all but three words to say to you: watch Black Dynamite. To put it simply, this album represents a partnering of epic proportions. You get the lyricism of a vicious and seasoned hip-hop marauder, aligned with the undaunted and soulful Spaghetti Western type vibes created by an absolute maestro of score production.

So lets get down to business. To effectively summarise this album in its entirety, this review is going to be saddled between three categories: lyricism (which will also be encapsulated by flow & delivery), instrumentals and finally replay value.

Lyricism wise, Ghostface brings nothing new to the table in terms of flow and delivery. This isn’t necessarily a bad thing however as devout hip hop fans will greatly appreciate his stalwart consistency on each beat and ever present firm delivery they have come to love and appreciate about his work. The album itself exists to tell the story of ‘Tony Starks’, an Italian man who has the unfortunate luck of becoming besotted with a crime lord’s daughter. Of course the role of Tony is played by Ghostface himself and he steps up to the plate with no inhibitions.

At risk of ruining the listener experience I won’t delve into too much detail here, but just know that Killah does a very good job of evoking strong imagery of the events unfolding over the 12 tracks. To give you a rough view of what you are in store for, think of this album as a plate of chicken in front of a fat man who has wandered through the desert for some time. There is nothing but hunger and commitment to the task as Ghost bobs and weaves in between inciting visuals of bloodshed with his cronies in Murder Spree, to his effective portrayal of sincere doting naivety in The Center of Attraction. To be quite frank with you, he certainly shines as a story teller making the album a treat for the ears. Even more so if you are an avid hip hop fan.

Addressing the instrumentals, I truthfully don’t know where to begin. Having experienced Adrian’s work in Black Dynamite where he produced a magnificent score for the film, and his dreadfully under appreciated composition Something about April, I attempted to try and cast aside any preconceived notions I had of him as I listened through. With that being said, his contribution to this album was nothing short of amazing. Seriously. The album oozes such cinematic quality in terms of the production that you can’t help but feel as if each individual instrumental was carefully crafted every step of the way as Ghost pulls us further into the story at hand.

While it is very easy to single out tracks, there is such overwhelming fluidity that you don’t even consider rewinding. Rather, you want to just sit back and let the narrative stroll on unhindered. If I were currently wearing a hat, I would take it off for Younge as he certainly succeeds in capturing the feel of early Wu-Tang while injecting it with his own 70’s soul sound- Beware of the Stare being a prime and beautiful example of this.

In the assessment of replay factor I have to address my only fault with this album, the length. At only 40 minutes long, this is a woefully short piece of work which is definitely due to the constraints of the concept presented. Understandable of course. Whilst this is a flaw however, it also serves as a wonderful replay encouragement tool. It is essentially just like watching your favourite gangster flick again and again (without having to sit through it for 90 minutes at a time) and as a result, I have quite possibly played this album at least 12 times (ironically) since purchasing.

Summarising this latest gift from the Wu-Tang camp, to ignore this album would certainly be a shame. While it isn’t single handedly the greatest piece of work Ghostface Killah has ever brought to the table, it is certainly going to be in the list for great albums of 2013. In short it represents what can happen when both concept and production are unified expertly and of course thoughtfully.