Interview: The Skints – “These are the strongest songs and the coolest sounds we’ve ever created” 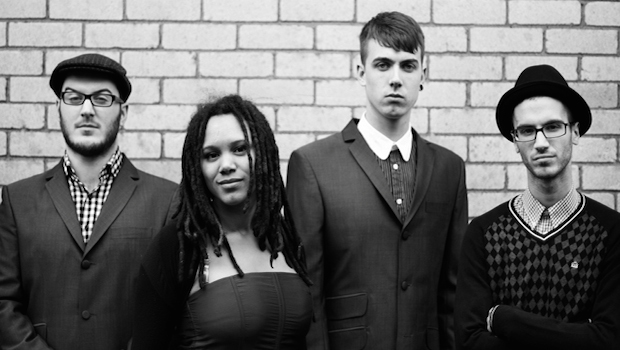 To many modern-day reggae fans, The Skints are rapidly becoming a household name, with their unique blend of rocksteady, roots, dub, ska and many other genres now a mainstay of numerous festivals across the continent.

With a new, as-of-yet unnamed album due for release in late 2014, guitarist/vocalist Josh Waters Rudge took the time to speak to us about his influences, politics in music, European festivals and some rather unusual choices of attire…

Thanks for taking the time to talk to us. First thing’s first, how are you?

Yeah, all good, man, all good. Just enjoying a very rare day off this month before we get back to it this weekend.

Throughout your career your sound has developed from a more “traditional” one and has incorporated more and more influences from other genres. With this in mind, what are we to expect from the new album?

Expect the unexpected, actually. We started working on some bits just before we did our tour in Europe a couple of weeks ago. I mean, every band has said this about their album *laughs*, but I think these are the strongest songs and the coolest sounds, as it were, that we’ve ever created. I’m really looking forward to working more on the new record. We all are.

What’s your process when it comes to putting new material together? Does one person bring the main idea to the table or do you work stuff out together?

There’s not really a strictly set formula when it comes to The Skints writing new music. We’ve got three songwriters in the band so there’s never really a shortage of ideas, which is very lucky for us. Sometimes the song will be one person bringing it to the group, then we’ll change a bit and you’ll hear it as it is and then sometimes it’s all three of us writing lyrics together. Or maybe John (Doyle, Bassist) will come up with a  bassline and we’ll do that. Yeah, there’s a bunch of different ways the songs can come about which is cool because it doesn’t make songwriting a chore or boring and routine, if you know what I mean.

You’re working with Prince Fatty again on this album. What’s it like to be able to work with him?

Yeah, we’re going to be working with Fatty and maybe one or two other people. We first worked with Fatty on our second album, Part & Parcel, a couple of years ago and we’ve kept working with him ever since on different bits. We understand him, he understands us and we’re good friends as well so it’s a very easy producer/band relationship.

Are we to expect any other guest appearances?

Yeah, definitely, definitely. Producer-wise, we’re going to be working with a guy called Pete Miles, who did our first album, on some songs. And we’ve actually confirmed, but I can’t say just yet, a few guest vocalists and MCs and whatnot. We’re really, really excited about.

Going back to your last release, the ‘Short Change’ EP, had quite a political edge to it, particularly on ‘The Cost Of Living Is Killing Me‘. What is it that makes you want to bring politics into your music?

It’s not really about bringing politics and making sure we’re a politically-on-board band at all. I think, y’know, every artist whether they wanna be or not is political whether it’s a punk band like Anti-Flag singing about the wrongs of the American government or Rick Ross telling us how much money he’s got, you know what I mean? In a way, it’s kinda all political. With us we never really think about “Ok, let’s be a political band and be seen to believe in these sort of things”, it’s more about the songwriters and how they’re feeling about the situation at the time. We’re very much only ever writing from our own perspective and experiences and the things around us. It’s kind of a natural outlet for us rather than a political agenda, I’d say.

It’s clear from the numerous covers you’ve released over the years that your influences really do span the decades. Who are you particularly into at the moment?

I still listen to a lot of new music and old music as well. I’ve been listening to the new Ghetts album recently, actually. Coming from where we’re from we were exposed to grime before it was even called grime. Less so than with reggae and punk, which is we’re very much involved in those kind of scenes, as a listener I’ve always been very involved so his new album’s been very cool. Been listening to a lot of Johnny Osbourne recently, who is obviously one of our main musical influences. We’re doing a bunch of festivals this summer that he’s at as well, which we’re stoked about. Off the top of my head, those two at the minute, yeah.

Speaking of festivals, you’ve got a pretty busy schedule coming up, including Boomtown. What are you looking forward to most?

Festival season is probably the best kind of thing you can do with your summer, in my opinion. We have such a laugh every summer, playing to so many new people at all these new festivals and I’m really looking forward to it as a whole thing, like a whole package experience. But off the top of my head, we’re really blown away by some of the bills we’re on this year like Summerjam in Germany, Reggae Sun Ska in France, Lowlands in Holland, we’re going back to Croatia this year which’ll be really fun, Boomtown, obviously, Secret Garden Party…

I’m heading to Boomtown myself so I’m pretty excited about that.

Yeah, man, it’s our fourth time at Boomtown this year so we’ve really got to step the show up. We’re all really excited about that challenge because Boomtown last year was a really special gig for us, we’re really looking forward to it.

And with so many shows racked up in the past, you’re quickly getting a reputation as one of Britain’s hardest working young bands. Are there any particular highlights you want to tell us about?

Yeah, as you say we’ve done so many, we’ve kind of been on tour for the last five years now, we’ve rarely had time to look back and thought “Wow”, y’know? But when we headlined KOKO last year, the hometown London show of our headline tour, that night it felt like a lot of our hard work had been leading forward to that show. We’d gone from nothing to selling out KOKO, was pretty special for us. But every show, I mean, we were in France last week and did two of the most incredible shows there as well. That’s kinda part of the fun of it, you never know how cool the next one is gonna be.

A couple of us here at Fortitude were wondering about your costumes-and-cereal banner photo. Not your average band pic. Is there a story behind that?

Yeah *laughs*, that was taken from our Halloween show last year, we just haven’t bothered to change it yet. It still makes me laugh when I look at it. We don’t go out on stage dressed like that most nights, only Halloween.

And finally, what’s next on the agenda?

This weekend we’re going to France and Holland for a couple of shows, and then we’re the Netherlands again next weekend for another festival. And in early May we’re going to Greece and Bulgaria, which we’re really excited about because we’ve never been there before. And then it’s back to the studio to do a bunch of work on the new record and then festival season. That’s going to keep us busy for the next few months.

The Skints – Out My Mind on MUZU.TV.