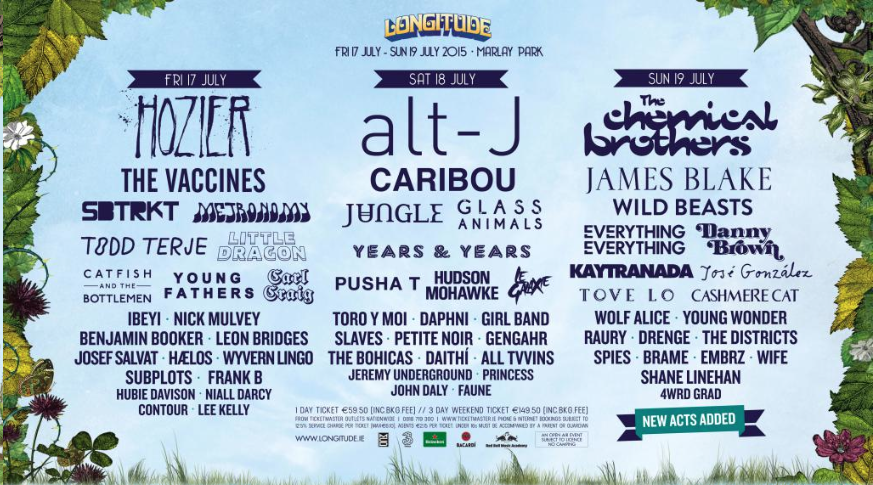 Given that Longitude 2015 is only a mere few days away, we’ve chosen our annual top 5 must-see artists in Marlay Park this year.

Potentially the most original artist to come out of Ireland in recent years, Daithí is known for his energetic, unique sound executed on an electronic, synthesised fiddle. His 2014 debut album ‘In Flight’ rocked up as proof that there’s no limit to what Daití can create with his distinctive musical venture, bringing him a whole new and ever growing following. His live presence is likely to be one of the most exciting at this year’s Longitude. Get out and catch him on the Saturday!

Quite a mellow sound, singer/songwriter Nick Mulvey incorporates intense passion in his live performance, throwing every ounce of his appreciation for songwriting into the execution. 2014’s ‘First Mind’ included tracks such as ‘Fever To The Form’ and ‘Cucurucu’, both of which are sheer fan favourites. For fans of acoustic, acoustic-driven folk, Nick Mulvey is an absolute must see this year.

Pretty indefinitely the biggest breakthrough international artist of 2015, Years and Years are just going from strength to strength. Having tipped them in December 2014 as one of our artists to watch for 2015, the growth of the London trio has proved pretty phenomenal. The release of their debut full length album ‘Communion’ has cemented the success that ‘King’ and ‘Shine’ initially brought them, flexing 14 equally impressive tracks in their repertoire. If you’re a fan of the album, the live show is bound to top it by double figures.

Ultimately flying the flag for Ireland, Hozier has been breaking waves and topping charts since the release of breakthrough hit ‘Take Me To Church’. Since then, listeners in their numbers have been drawn to tracks such as ‘From Eden’, ‘Someone New’ and ‘Sedated’. Known for his impeccable vocals, which are highlighted on a festival stage, Hozier’s performance at last year’s Longitude was the talk of festival-goers for quite a while afterwards, and with a year’s experience later and even more momentum, we struggle to imagine the quality of this year’s performance.

1. Catfish and the Bottlemen

As very early supporters of The Bottlemen here at Fortitude, their undeniable success over the past few months to a year has been a joy to follow. Their 2014 album including hits ‘Homesick’ and ‘Kathleen’ is a record bursting with festival anthems, and what better place to see them than in Dublin’s Marlay Park. Taking to the stage on the opening day, Longitude will take off with a firmly energetic, manic start.