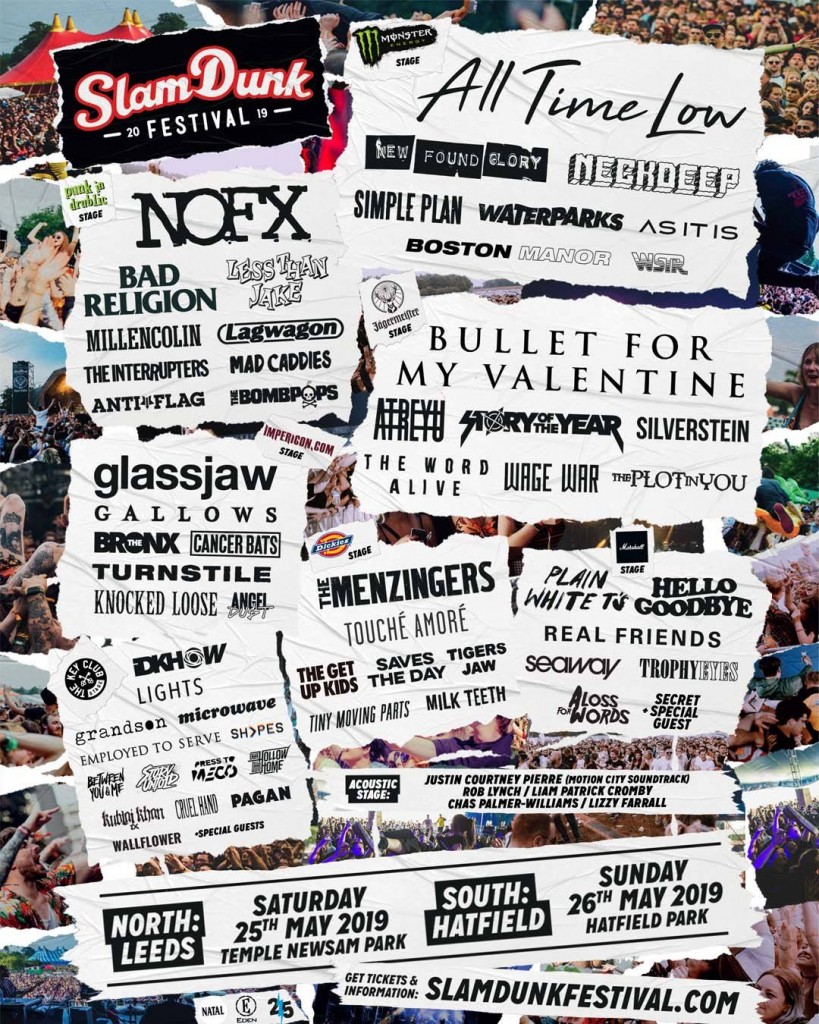 Slam Dunk is back and while this year sees no Midlands date (boo, we know it sucks too), there is a brand new site for Slam Dunk North, Saturday 25th May, which is now moving to a bigger site at Leeds’ Temple Newsam Estate and Slam Dunk South, Sunday 26rh May, will return to its larger site of Hatfield House ahead of last year’s success.

This 2019 line-up features a mega blast from the past with bands such as New Found Glory, Simple Plan, Less Than Jake, Plain White T’s and Hello Goodbye.

You’ll also be pleased to know that Slam Dunk has improved the timings of some of the stages to avoid fewer clashes – yay!

Hear what some of this year’s act had to say about Slam Dunk Festival:

Patty Walters of As It Is says; “Words can’t even describe our excitement to be returning to Slam Dunk Festival. I’ve been attending Slam Dunk as a fan for nearly ten years now, and this year won’t be any different with such an unreal lineup of bands. We can’t wait to get rowdy with you at our biggest Slam Dunk yet. The crash is coming.”

Henry Cox of Boston Manor says; “We’re very excited to be playing Slam Dunk again this year; it’s one of our favourite UK festivals. We’re gonna make it one to remember.”

On making his Slam Dunk and UK festival debut, grandson says; “This summer I and a small caravan of the baddest most diabolical rock and roll immigrants I could possibly assemble will be descending on your grounds to play my first ever festival outside of North America. I am not exaggerating when I say it is something I have been looking forward to my entire life, and my preparation, enthusiasm onstage, and general attitude will reflect that excitement I have. I can not promise you will agree with everything I have to say up there, I can not promise I will fit in with the rest of the music you will hear that day, but I promise it’ll get real fucking loud and real fucking dark. See you there.✖️✖️”

Press To Meco say; “We’re super excited to announce we’ll be playing Slam Dunk this year. It’s one of the coolest UK festivals and they knock the line up out of the park every year.”

Ticket information
Festival tickets are on sale now for £59, and are available from http://slamdunkfestival.com/ Afterparty tickets are sold separately, but can also be purchased through the Slam Dunk Festival website. All tickets are subject to booking fees.

Festival Information
Festival gates and wristband exchanges will be open from 9am. The Main Arena will open from 11am, with the first acts on from 11.45am. All acts will be finished by 10pm, with a 11pm festival curfew.
For more information, visit the Slam Dunk website or follow Slam Dunk:
Twitter: https://twitter.com/SlamDunkMusic
Instagram: https://www.instagram.com/slamdunkmusic/