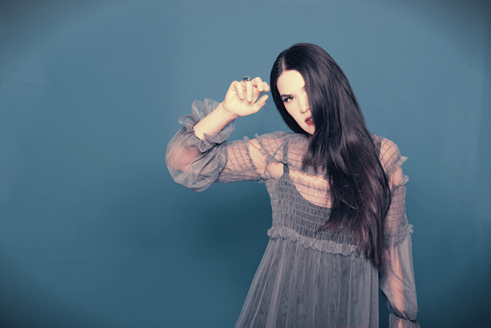 The incredibly talented singer-songwriter Phildel has just released her new single Oh Love. The mesmerising track comes ahead of the release of Wave Your Flags, her first LP in four years.

The track opens with heavy, deep piano keys that reverberate and give of slightly chilling edge. Phildel’s voice breaks through, deep and harmonious with a beautiful clarity. She possesses a unique voice that commands all attention and the minimal backing really lets her vocal shine. Electronic elements, beats and heavy keys sweep in and blow away any perceptions you had about the direction the track was going. The backing harmonies are angelic and ethereal-sounding, bringing a wonderful choral element that creates such a unique sound when blended with the synths. Phildel wrote Oh Love as an ode to her partner who’s been her rock and biggest support throughout the turbulent times she’s faced. She says the track is about “the power of love to give us the resilience we need to deal with the most difficult things life throws our way.” The passion in her voice is palpable when she sings the chorus of “oh love, running down my skin it’s too much. Never cried about a thing until now.” The track is a powerful blend of the classic and the contemporary and most certainly a hidden gem that deserves to be heard.

The accompanying video depicts a powerful narrative about the rise in male suicides. The man is bound by a string that winds around him, stifling him so he can’t move and is just an outline of his real self. Phildel unwinds the string to reveal the man inside, freeing him from all that was burdening him and being the supportive shoulder that he needs. When speaking of the subject matter of the moving video Phildel said “Isolation becomes a massive part of the problem as men feel unable to be their authentic emotional selves around others. We need to work hard to turn around this damaging, emotionally repressive messaging and show that men expressing their authentic feelings is absolutely welcome, valid, and represents a healthy way forward for the world.”

Phildel released her debut album The Disappearance Of The Girl in 2013 and Wave Your Flags is the long-awaited follow-up which is due for release on 17th May. Find out more about Phildel here and have a listen to Oh Love below.