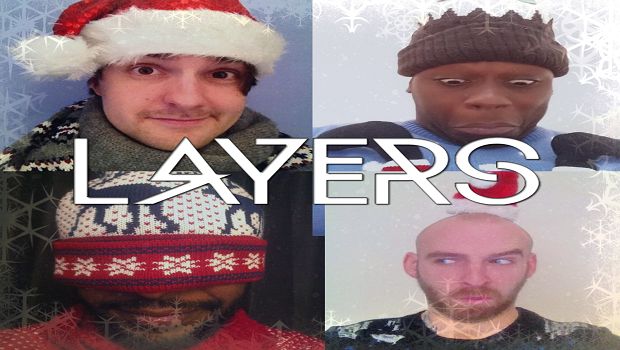 Now I’m all for a bit of Christmas spirit in November but I was a little taken aback that a Christmas single had already been released this year. Birmingham alternative band Layers are the culprits…

With comments such as “soulful, brilliant and interesting” from Kerrang! Radio’s Alex Baker, they’re already clocking up fans in the media and through their energetic live performances.

Their self titled EP was released in September and they’ve embarked on a mini UK tour, finishing at Underground festival with Mallory Knox and Marmozets. Layers encapture a fun, down-to-earth sound who obviously love the festive period so much that they’ve released ‘It Feels Like Christmas (Now)‘ in November!

Slow strums and soft quirky vocals introduce the catchy swaying rhythm of the riffs and steady marching drum beat. Hints of alternative grit haunt the relaxing vocal delivery which help them retain their rock roots. The melody changes suddenly into that of ‘My Favourite Things‘ from The Sound of Music before making the bizarre transformation to ‘Deck The Halls‘. Indeed, the death screams to the tune of ‘Deck The Halls‘ is really quite surreal and you can’t help but raise a smile.

Upbeat lyrics and the mentioning of classics such as Mary Poppins and The Muppets create a real homely feel surrounding the upcoming holiday. So many people can relate to it and that makes it a really special song. The ringing bells at the end are a lovely way to exit and there’s no doubt that I’m now even more excited about the whole occasion.

It may still be early to be listening to Christmas music but there’s no doubt that Layers’ single will get you in the mood. The big names seem to have rolled their adverts out early, so why not say yes to a Christmas track?