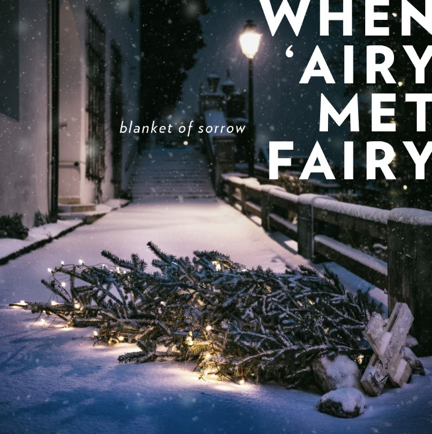 Nordic duo When Airy Met Fairy have released their new Christmas single Blanket of Sorrow. The two-piece, comprised of Icelander Thorunn Egilsdottir and Luxembourger Mike Koster, formed in 2015. Their debut album Glow was released in 2018 and received acclaim from publications such as Clash, Line of Best Fit and Louder. Following on from the release of Glow and slots at global festivals such as The Great Escape, Reeperbahn, Iceland Airwaves and Eurosonic, When Airy Met Fairy have turned their had to producing a Christmas song.

When Airy Met Fairy have taken the elements of the classic Christmas song and thrown them on their head to produce a single which taps into the darker, melancholic side of the festive season. Blanket of Sorrow opens with a downbeat piano and Thorunn’s stripped back vocal. Her voice is raw and delicate and catches in places hinting at the emotion behind the lyrics. A crescendo of organ keys add a choral element to the track while the deep bass guitar adds a dark broodiness. The harmonies are haunting as if being sung by a spectre of Christmases past and the lyrics such as “It’s cold out this Christmas, one pair of eyes are missing” evoke a deep–set sadness. Christmas is not only for celebrating and spending time with our loved ones, it’s also a time when we reflect on the past and those that are no longer here to share the festivities with us. When Airy Met Fairy have tapped into the feelings of loss felt through a loved ones absence.

Vocalist Thorunn spoke of the inspiration for the track: “I felt like this last Christmas when I was celebrating with my family in Reykjavik. I sat down at the piano. It was in a dark room, illuminated by the glowing snow outside. There was no sound in my brother’s house as everybody had gone outside for a walk. And there it was; Blanket of Sorrow. The melody, the lyrics, as if they had always existed.”

The melancholic Blanket of Sorrow is out now. Find out more about When Airy Met Fairy here and watch the nostalgic accompanying video below which was filmed in a house untouched since the 1970s.