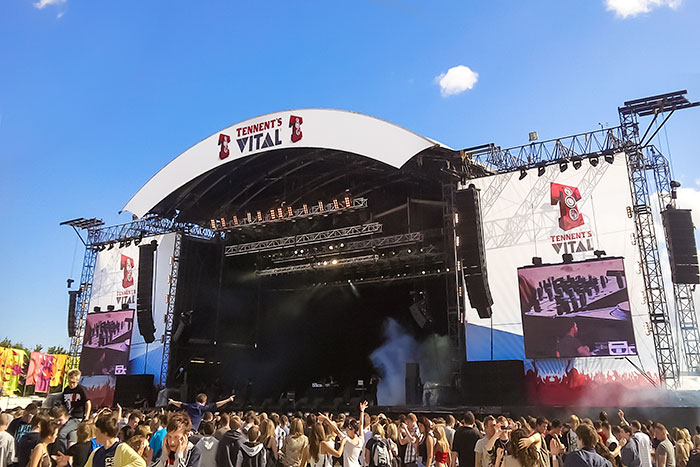 Returning to Boucher Road Playing Fields this year for another successful, unforgettable night of music, Tennent’s Vital have announced The Script as 2015 headliners.

Joined by Kodaline, Annie Mac, Clean Bandit and Jack Savoretti, August 30th will host some of the finest talent in the current scene.

As well as the Sunday, Boucher Road Playing Fields will also see the likes of Calvin Harris, Ellie Goulding and John Newman take to the festival on August 29th, making an incredible weekend of music for the August bank holiday weekend.

“We’re hugely excited to announce a line-up of fantastic artists for the second day of Tennent’s Vital 2015, completing the bill for this year’s festival. With The Script, Kodaline, Annie Mac, Clean Bandit and Jack Savoretti plus Calvin Harris, Ellie Goulding, John Newman, Disciples and BURNS this August bank holiday weekend is shaping up to be a phenomenal few days over 29th – 30th August.

Since The Script’s No.1 self-titled debut album in 2008, they’ve been on an upward stretch, selling out stadiums worldwide, including being the third Irish artist ever to sell out Croke Park. Now with their fourth studio album ‘No Sound Without Silence’ hitting the spot amongst fans, the three-piece are set to bring their hit-filled repertoire to Tennent’s Vital this year.

Kodaline quickly racked up the reputation to be seen as one of Ireland’s finest musical offspring in recent years. Their debut album ‘In A Perfect World’ was the spark to set them into a whirlwind of success, and now their new album ‘Coming Up For Air’ is a breath of fresh air, taking on a more versatile sound.

Having recently secured a job as the new presenter on BBC Radio 1’s evening new music show, Annie Mac has seen her popularity as a DJ take her to many festivals, a set alongside Fatboy Slim, an Australian tour and more. Annie is certainly looking likely to spark a buzz at Tennent’s Vital this year.

Grammy award winning Clean Bandit were launched into the spotlight with their single ‘Rather Be’ from their debut album. The track was named the number 1 selling track in the UK, second only to Pharrell Williams’ ‘Happy’. The band are looking likely to be the real life of Tennent’s Vital this year.

Flaunting a 10 year career under his belt, English singer/songwriter Jack Savoretti’s latest album entered the official UK album chart in the top 20, followed by a sold-out UK and Ireland tour, including a packed out show at London’s O2 Shepherd’s Busk Empire.

Fans can get their hands on tickets for Sunday 30th August, headlined by The Script and featuring Kodaline, Annie Mac, Clean Bandit and Jack Savoretti when they go on sale on Friday 29th May from www.ticketmaster.ie. Fans of Tennent’s Vital on Facebook can get exclusive priority access to the Tennent’s Vital pre-sale from Thursday 28thMay – join www.facebook.com/tennentsvital to find out how to reserve your ticket before they go on sale to the general public.

Tickets for Tennent’s Vital 2015 – Sunday 30th August at Boucher Road Playing Fields will go on general sale from 9am on Friday 29th May, priced as follows:

Tennent’s Vital is an over 16s event.  However, a parent aged 25 and over can take up to two under 16s to the show.  Parents will be required to show age identification and sign a consent form in order to gain admission on the day. Under 16s must be accompanied by their parent at all times. Bars will operate a strict Challenge 25 policy.