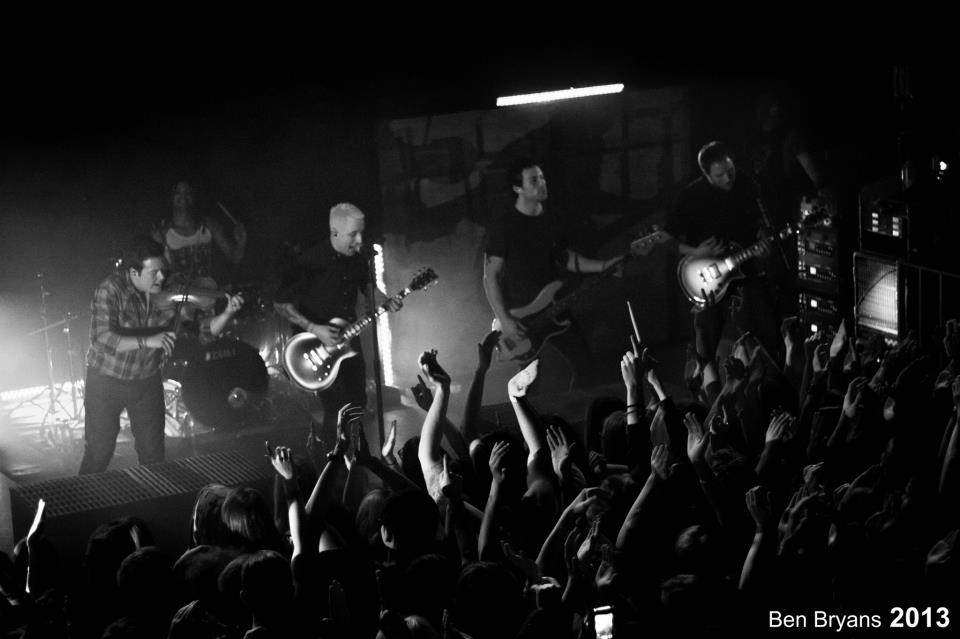 There’s a buzz in the air tonight as fans make their way through the merch area, already throwing on their brand new Yellowcard t-shirts, and straight towards the barrier to secure their place for tonight’s somewhat intimate show.

As I’m guided by venue staff, all the way round the venue, to the closed off photo pit, I happen to walk past Yellowcard’s Ryan Key on the phone, away from the rest of his band mates; who are each sat outside individual doors either on a Apple device of some sort, listening to music or sitting with their head down in preparation for what’s to come tonight.

First on the bill are Sweden’s Like Torches, a young and enthusiastic band, who when walked on stage made their best effort to make sure everybody in the room know they were there. An energetic performance from European boys suggest they want to leave a lasting impression as an opening act and, with head-bobbing, clapping along and Jonathan Kärn teaching the crowd the odd word of Swedish, it is exactly what they do.

Next up tonight are Yellowcard’s next door neighbours from Florida, Set It Off. There’s a lot of hype around these guys with their début headline show in London just less than 24 hours away after tonight’s show. Arriving to screams and cheers, frontman Cody Carson takes the stage and bursting straight into the opening track ‘Nightmare’, from their debut full-length album ‘Cinematics’, which not only made the floor shake with screaming fans going crazy but the walls too!

A few screaming requests for their song ‘@Reply’ puts a smile on the frontman’s face with the reply (no pun intended), “Alright alright we’ll play it soon enough…”

By their third song (I’d Rather Drown also from Cinematics) bassist Austin Kerr is drenched from head to toe in sweat, the sign of a good show…

Their song ‘I’ll Sleep When I’m Dead’ see’s drummer Maxx Danzinger jumping up from behind his kit and welcoming Yellowcard’s Longineu ‘LP’ Parsons to the stage and Maxx jumping around like a 5 year old on Christmas morning beating the hell out of his cymbal.
The band finish up with their song ‘@Reply’ resulting in a room full of people screaming every lyric straight back to the band and resulting with 5 Americans on a stage looking very satisfied with their set for the night.

Only a few bands can just walk on stage and scream the word “HEY!” and get such a reaction in the form of 200 screaming fans. The band starts with the opening track ‘Awakening’ from their latest release ‘Southern Air’ resulting in the entire room from front to back literally screaming “Bottoms up tonight, here’s to you and I!” with their best friends by their sides.

Halfway through the show comes LP’s time to shine, where he stops the entire crowd to put a towel over his head and perform a blind drum solo completely stunning the crowd with the amount of power one man can have in his right foot.

Stringsman Sean Mackin disappears off-stage only to reappear moments later, to which frontman Ryan Key points out that Sean wasn’t informed that tonight’s set would include no encore, as he simply couldn’t wait for the club night that’s happening after the bands set.

Its drawing closer and closer to the end of the band’s set and they have still yet to hear the lyrics from arguably the band’s biggest song ‘Ocean Avenue’ leave the frontman’s mouth to which he announces that this is the band’s last song and the opening chugs of the first two chords to the song light up the crowd.

The band end their set and stand there in shock at what they have achieved tonight; they have literally rocked the Coventry Kasbah. Yellowcard are back!