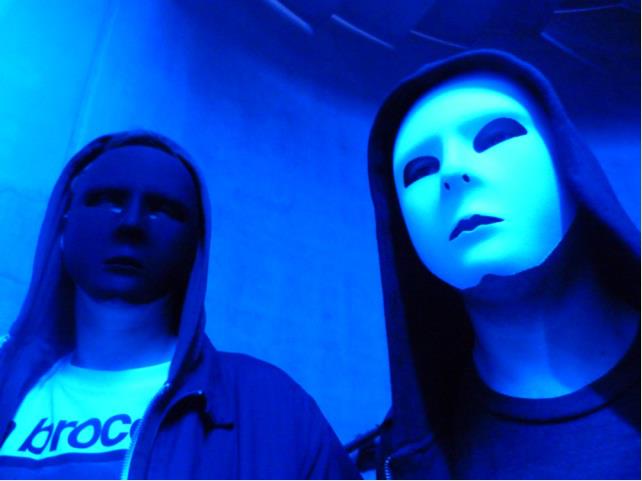 In the grand scheme of things, a band touted as being an amalgam of influences so obvious in their music by their own press release is a bit of an unwise move. When the signs are all there, you don’t need pointing to them; your reviewer is now acutely aware that mentioning the bands in question during the review would be lazy and a cop out. Perhaps this is a tactical marketing move to prevent the band being compared to other bands they are clearly indebted to? If so, well played.

Where The Skeletons Play are a two piece studio project, which is code for ‘made in the bedroom’. There is, of course, nothing wrong with this, but it does help to explain certain aspects of the material; the drums sound like a guitarist having a go while the drummer’s on break, the distorted vocals have a rough, grainy edge that only comes from poor mixing, and the bass sounds like it was recorded on the day of release.

These foibles unveil themselves instantly on first listen. However, beneath the done-in-the-shed production, there is some material of interest. Starting with some string-scraping and a brief buildup, where Serotonin Blueprints immediately differs from the previous work is in its latent aggression. The half-whispered, over-wrought vocals are uncomfortable to listen to, though perhaps not in the way they were intended.

As Perspex Queen blusters past, the EP begins to spread its wings. The chorus is stronger, the feeling of the track calling their previous work Never Born A Criminal to mind. The syncopated riff just past the halfway mark is well executed, though the ‘show me your good side’ section is a trifle overplayed; taking the over-performance out of the vocals and dialling up the grim sounding gang vocals would have been a welcome juxtaposition.

The pairing of the pleasingly dreamy If We Just Pretend…/…Your Innocence Exists felt like a different band entirely. Far more potent and committed, the first half’s mid paced drawl feels and sounds like a band enjoying, if not revelling in, themselves and their sound. The too-short shoegazing acoustic number that represents the second half is the best part of this record, almost shuddering with fragility and uncertainty, like a freezing deer calf looking for protection. Devoid of the metallic shroud so prevalent on the rest of the EP, it gives a better glimpse into the personalities of its creators than anything else presented here.

‘Is this all you ever needed/to feel like a king in someone’s eyes?’ , the chorus delivered with no small amount of weight on the title track, gives the impression of being something of an exposed nerve in the WTSP camp. Whether autobiographical or otherwise, the track has a bold, stern, anti-swing to it, swelling into a harmonised breakdown and mantra-like refrain.

Saving the most dramatic piece for last, Serendipity comes over all majestic. Recalling The Ghosts On The Frontline from Generation Wars but with greater depth, this is great way to close the record. On the strength of Serendipity, Pretend/Innocence and the material from their previous record, it is a shame they are to confine themselves to the studio.

I believe that every artist should ignore their public and serve them not by catering to their needs, but by delivering a body of work that they, the artist, are proud of and believe in. To this end, Where The Skeletons Play are a band with a unique vision, and a little more time will serve them well. For the record, When The World Was Black & White off Generation Wars is massive, and reminds me of Current 93, were they an industrial unit, and rarely do I bestow compliments of that nature. Serotonin Blueprints is a record worthy of your time, if only to encourage this dynamic duo to make more records, and evolve their vision into the incredible beast I believe it can be.