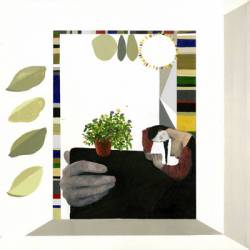 In a few short years Turnover have achieved a lot. With the release of their self titled EP and a split with fellow Run For Cover records band Citizen.

With the debut EP and the split with Citizen Turnover had crafted themselves a aggressive, angsty pop punk sound but with this release they have changed it to more melodic “Transit – Listen & Forgive” sort of sound which really highlights how far this band has come in such a short time and how talented they are.

Track 4 “Seedwong” really shows off how far the band has come musically, everything complements and adds to the sound of the other instruments and vocals. The song itself is a rather dark,  very 90’s emo sound. Following this on “pray for me” the tempo going from a quick to slow making us continue to enjoy the sound without it getting boring.

“Bloom” is the closest thing that we’ll get to the old sound of turnover. Energetic, sounds a bit generic to everything out there but when you listen to the lyrics and vocals you can see why Turnover are a very good band and are not one dimensional, with bags of talent you can see why they have pulled off the change of direction with such style and class.

“Hollow” is another song that is a bit quicker but keeping with the melodic sound that has been crafted out. Once again all of the instruments and the vocals combining beautifully to make a great sound and a very enjoyable listen.

Track 9 “Like a whisper” another quicker tempo song. This track is my favourite from the album. Some fantastic lyrics “nothing you could ever say is loud enough to resonate” is one of my favourite lines from the album closely followed by “All this time I spent thinking about you I was better off not thinking at all”. Another song very close to the older sound, really reminds of a slower “Sasha” from Turnovers self titled debut EP.

The penultimate track to the album, the beautiful acoustic “Flicker and fade” really highlights the songwriting talents of Turnover. One of the stand out tracks on the album. Album closer “Daydreaming” closes off the album is a simple yet pleasing way. Ending the album the way it was started with melodic guitar riffs and soothing vocals.

The bands sound has really matured since the release of their debut self titled EP. Less angsty pop punk towards a more melodic pop punk. With the sound slowed down and the band concentrating more on the music than the energy really helps them stand out as a class band and not just as one of the many bands of the genre.

The album is available to buy from the 16th April.