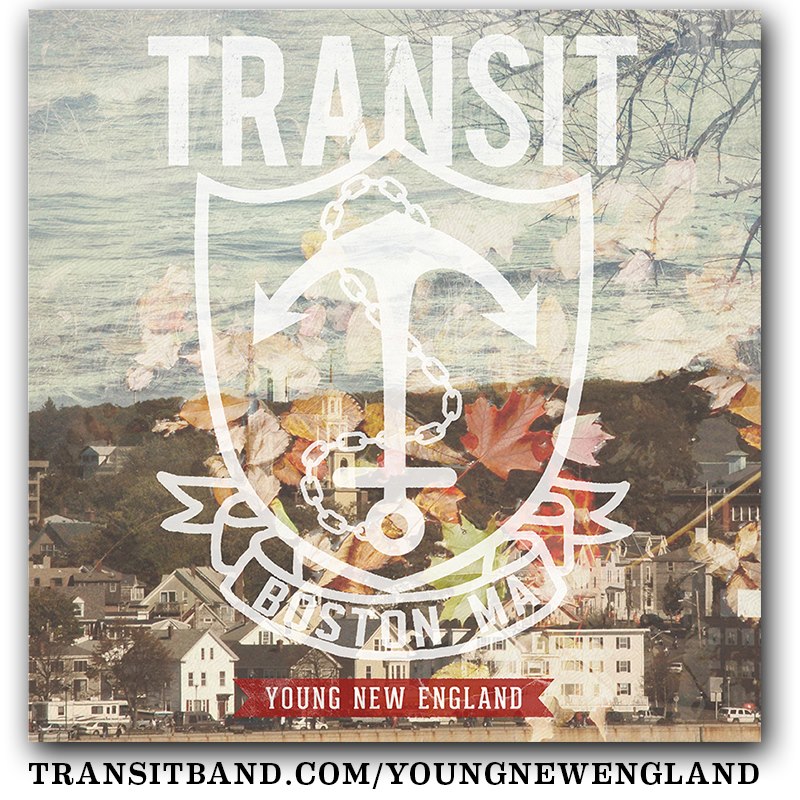 Boston 5 piece Transit have come a very long way since their creation in 2006. managing to release 1 split with fellow genre giants Man Overboard, 3 EP’s and 3 albums. Their 4th album “Young New England” which is out on the 2nd of April through Rise Records continues the success story of one the true giants of pop punk.

The most impressive thing about Transit is they always grow and change. None of their releases have ever left you feeling like the band is stagnating a bit, which for a band that can be classified as “pop punk” is an incredible achievement.

Opening song “Nothing Last Forever” is one of the strongest songs on the album and a sublime song to open the album with. A great, energetic sing along track that is sure to become a fan favourite. The upbeat, catchy opening of the album continue with track 2 “Second To Right”.

We are slowed down with a nice but equally as catchy acoustic track “Young New England” which the album is titled.  Track 5 “So long, So long” is a personal favourite of mine  and will become a crowd favourite during live performances with a copious chances for the crowd to have a sing along with lead singer Joe Boynton.

You notice as you listen to the album (at the time of writing I’m on my 3rd play through) how much of a real sing-a-long album this is. Every single song is catchy and there are nice parts in every song where you can just sit down, close your eyes and imagine you are watching the band and you are hundreds of other music lovers are just chanting the lyrics back to Joe Boynton and gang on stage.

For those fans with Vulcan like hearing, during track 7 “Hang It Up” you’ll be able to hear a nice little reference to their last album “Listen &  Forgive”.

Track 12 “Bright Lights, Dark Shadows” starts to wind the album down to the phenomenal finish that is “Lake Q”. One of my favourite lyrics from the album is on this track, “Day Dreaming When The Skies The Limit”. Lake Q is by far and away my favourite track off the album and is right up there as one of my favourite Transit track along with “Long Lost Friends” and “For The World”.

The way the song seems to end just before 3 minutes and then kicks back into the chorus which is truly is fantastic. The whole album is a triumph and has been well worth that wait since their last release back in 2011.

When I heard that Transit would be releasing a fourth album I was worried that they wouldn’t be able to do better than “Listen & Forgive”. I don’t think I’ve ever been so happy to be wrong.

Transit are embarking on a huge tour of North America during April and half of May and will then be crossing the pond to play Slam Dunk at the end of May for those UK fans.

Watch the video for Nothing Lasts Forever: