Review: Tonight Alive – The Other Side 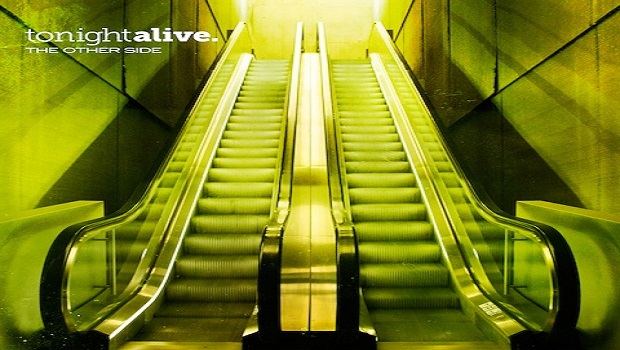 The new album from Australian pop-punks Tonight Alive is on the horizon and it comes with a lot of anticipation.

Their last full-length album, ‘What Are You So Scared Of?’ was released back in 2011 and since then, the band have toured the UK, US and Europe supporting bands such as Young Guns and Pierce The Veil as well as appearances at Slam Dunk festival in the UK and Warped Tour in the US.

‘The Other Side’ will no doubt be the pop-punk’s new favourite record with some passionately delivered vocals and some ear-splitting riffs. Singer Jenna is the star of the show once again throwing girl power into the tough, metallic framework. Tracks such as ‘The Ocean’, ‘Complexes‘ and ‘No Different’ see her voice being stretched to the limit while the instruments perform a slamming furore.

‘Lonely Girl’ sees the guitars growl and snarl through strong drum beats while the vocals give a heart-rending performance. It has a real fiery personality and is a great moshpit anthem, much like ‘The Fire’, which has a ricocheting riff running throughout. It also has a strong passion in the vocals behind mechanical guitars in the instrumental. So much determination fires through it and it’s a really energetic, inspiring track.

Classic pop-punk is included in ‘Come Home’ and ‘Say Please’, which both have ringing riffs and vocal tricks. ‘Come Home’ has a summery feel with catchy, cheerful vocals and perfect guitar blending whereas ‘Say Please’ has a pretty melody and desperate pop-rock vocals. There is a dark sadness to it, which is filled with hope. Both tracks although they have very different moods are about waiting and longing for a lover to come back to them. It’s a universal song that conjures up lots of emotions.

Visiting the past in the title track, ‘The Other Side’ is an acoustic interlude that is quite possibly my favourite track on the album. It looks back on teenage memories of the power of first love and creates an atmosphere of chilled nostalgia. Powerful and regretful, it’s a song with a real story attached to it and it’s a story that everyone has their own version of. I love that they named the album after it as it automatically makes it the focus of the whole record.

Taking things down a notch is ‘Don’t Wish’, ‘Hell and Back’ and ‘You Don’t Owe Me Anything’. ‘Don’t Wish’ is a slow piano-led number with dreamy ripples and a singing guitar. The drum adds a fierce element as the vocals blend into the instruments and metallic spurts come from the riffs. The piano comes in to haunt the end while Hell and Back is a more mellow atmospheric number. The vocals take on an Avril Lavigne style and although it is still traditional pop-rock, there is a mourning sound to it.  Closing track ‘You Don’t Owe Me Anything’ is a beautiful acoustic number which takes on the form of a sad pretty ballad. Halfway through the guitars and drum enter and amp it up to a big showcase finish.

All in all, it’s a great album with beautiful pop-punk ballads pulling it together. There is still plenty of attitude involved but if you’re a metal-head, this is far too sweet for you. Sure, there is aggression on some of the songs but it simply charges the pop bubble and gives it a bit of an edge.

Check out the Official Music Video for ‘Lonely Girl’ below: