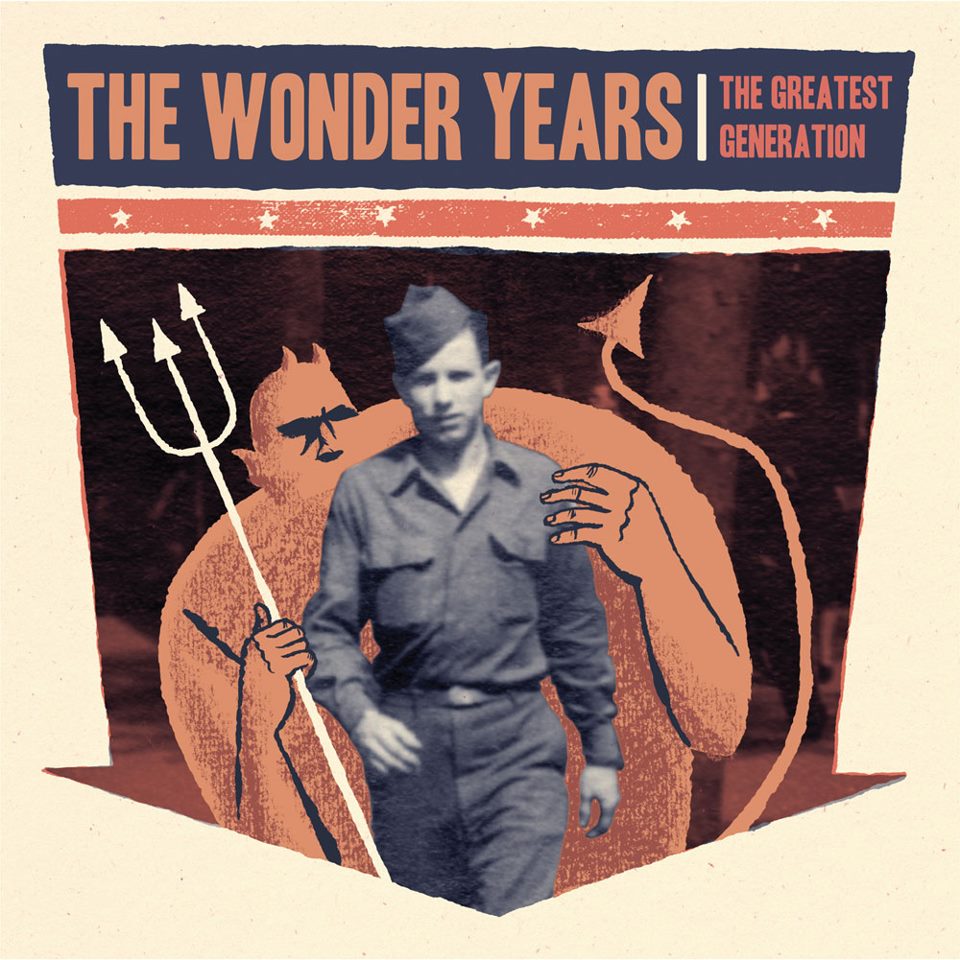 The Greatest Generation is the fourth full length release from The Wonder Years. The final installment in a trilogy about growing up and winning your own inner battles. The previous two albums in this Trilogy “The Upsides” and “Suburbia I’ve Given You All And Now I’m Nothing” document vocalists Dan Campbell’s struggle with anxiety and depression and this third installment tells us about the end of the battle, the end of war.

Opening song “There, There” starts the album off with slow a guitar riff and soft vocals, then with a yell of “I’m sorry I don’t laugh at the right times” after one minute twenty seconds you know the raw emotion of this album is going to hit like a freight train. A very different opening track than the previous albums but it sums up what this album is about and shows us that the band are maturating and just like the trilogy of albums, they have grown up.

Lead single from the album “Passing Through A Screen Door” brings back the blistering energy that fans have come to know and love from the band but keeps the raw emotion and confessional lyrics that makes The Wonder Years really stand out from the crowd. Following that “We Could Die Like This” feels like a continuation from the last album and wouldn’t sound out of place somewhere in the middle of “Suburbia”.

Second single “Dismantling Summer” and “The Bastards, The Vultures, The Wolves”  has infectious pop punk rhythms but dark and emotional lyrics. Then we are treated to something completely new by The Wonder Years. For me the standout track on the album and probably the best song they’ve wrote. “The Devil In My Bloodstream” is the freight train of raw emotion I mentioned earlier on. Opening the song is soft vocals from Dan Campbell and guest vocalist Laura Stevenson whose backing vocals compliment Campbells perfectly. Beautiful Piano keys add an extra layer of emotion to the song that is a tribute to Campbells great-grandfather. The song is beautifully intimate with the confessional lyrics and emotion brought on my Stevensons backing vocals and the piano. The emotion is not lost when at the two minute mark vocalist Dan Campbell bellows “I bet i’ll be a f*cking coward” and the whole band joins in the make the track more than a song, but an anthem. The kind of song that if seen live would leave the most emotionally redundant person with a lump in their throat.

The pace is picked back up with “Teenage parents”  a song about growing up poor which sounds like a song that could have been on the deluxe edition of “The Upsides”. “Chaser” and “An American Religion (FSF)” continue the pace and have the normal pop punk rhythm and energy. “A raindance in traffic” has everything that makes the band great, energy, emotion and confessional lyrics. “I used to have such steady hands Now I can’t keep them from shaking” being a personal favourite.

The albums only acoustic track “Madelyn” for me is a poor “Hey Thanks” the only real weak track on the album, one that you wouldn’t feel too bad about skipping. “Cul-De-Sac” brings the energy and pace back up before the final track of the album.

Album closer “I Just Want To Sell Out My Funeral” is the perfect way to both close the album and finish the trilogy. At seven minutes thirty five seconds it is the longest The Wonder Years song to date. The song can be split into two different parts, the first about wanting to know enough people in your life and to feel fulfilled and the new American dream and then the second part. A breath taking, heart stopping mix of the best lines from the last forty five minutes of the album that mix together so perfectly that after three minutes thirty five when you once again hear “I’m sorry I don’t laugh at the right time” you get goosebumps.

I had such high hopes and expectations for this album when it was announced that I should have been worried about being disappointed, but this isn’t just any old band. The Wonder Years are something else, always evolving, always progressing but never changing. In an interview Dan Campbell says “People say the greatest generation has come and gone, but they’re wrong. They haven’t seen what we’re capable of”. If the last three albums have not shown what the band is capable of I feel sorry for every other band out there. The bar has already been raised higher than most will reach and I am fully confident with whatever The Wonder Years do next they will push that bar higher.

In the promotional video for the album released earlier this year you can hear leader singer Dan Campbell say that they ‘Want to be remembered for more than this’ and they will because The Wonder Years are more than a band, more than six friends writing music,  they are an icon. They are a ray of light for so many kids struggling with depression, anxiety and inner battles and nobody will ever forget their contribution to their genre and most certainly they will not be forgotten for the lives they have helped and saved with their music.

Watch the video for Pasinng Through a Screen Door: