Review: The Story So Far – What You Don’t See 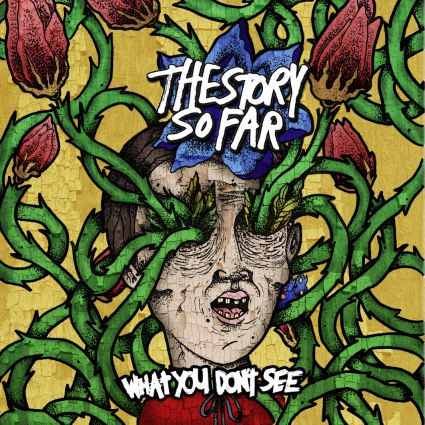 What You Don’t See is the second release from California band The Story So Far. Since the bands birth in 2007 they have taken the pop punk world by storm. With two EP’s and genre defining début full length release “Under Soil and Dirt”. Their fusion of pop punk and hardcore is brilliantly unique and has led them to have an army of fans from the US, UK and far and wide.

When the first chords of opener “Things I Can’t Change” came through my speakers I was hit by a tsunami of fear and anxiety. The Story So Far are one of my favourite bands and I was terrified that their latest offering might disappoint me. I don’t think I’ve ever been so relieved to be so wrong about something in my whole life.

As soon as you listen to the opening tracks you know that The Story So Far are not going to suffer from a “Sophomore Slump” like countless other bands have suffered from after a stunning first album. The album continues on form where “Under Soil and Dirt” left off.

With emotional, angry vocals from vocalist Parker Cannon, hard hitting guitar riffs from guitarist Kevin Geyer and Will Levey, thumbing bass from Kelen Capener and slamming drum beats from drummer Ryan Torf you know that The Story So Far will never disappoint.

It is so hard not to compare every tiny detail of this album to Under Soil and Dirt for two very good reasons:

1) Under Soil and Dirt was a flawless album.

2) Not much has changed musically in this album from Under Soil and Dirt.

This is no way a bad thing, The sound The Story So Far have created is a very unique and completely brilliant sound. Why fix something that isn’t broken. It is incredible that a band can make such emotional honest lyrics and keep up the ferocious energy through one song let alone continue it through two superb albums.

As with the last album What You Don’t See strongest songs are situated in the middle of the album, not that the opening and closing segments are bad, the middle tracks just some how go that extra mile to be truly superb. Track six, “Empty Space” is my favourite from the album, followed closely by “Right Here” and “The Glass”, track five and seven.

There is one thing that this album does seem to be missing. Every song in this album is fast paced and it maybe needed a slower song, not necessarily acoustic but something a bit more soothing; much like “Placeholder” did in the previous album. Just to slow us down for the big finish. That is just my opinion though.

Overall the album is brilliant, the band have somehow set the bar higher. The lyrics are brilliant and when singing along you can’t help but send any anger or frustration you have at an inanimate object with angry finger pointing while shouting the lyrics at it.

The Story So Far are currently touring American on the Suppy Nation Tour and will be touring the UK from April 30th and can be caught at Slam Dunk festival during May bank holiday weekend. Any US fans if they miss them during Suppy Nation can catch them at Warped Tour 2013.

Watch the video for Empty Space: