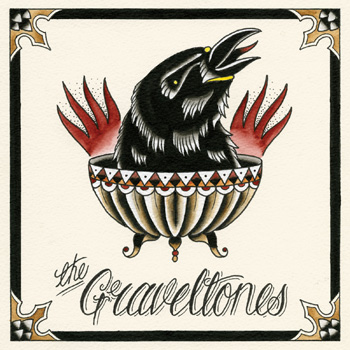 When Carlos Santana was first shown a MESA Engineering amplifier, he is reported to have to said ‘Man, that thing really boogies’, thereby giving the company its extended name. One wonders what epithets he would have applied to ZZ Top, Mountain, or indeed The Graveltones, who’s boogie content is so high as to be unreservedly bacchanalian.

Indeed, the amount of natural, genetic swing displayed on the first four tracks is remarkable, made even more so by the two-headed membership of its creator.

A precursor to recent single I Want Your Love, Graveltones makes no apology for itself. Standing proud and able on its own merits, this is a lean, sinewy young man of a record. Smiling, ready for anything and imbued with a confidence many hint at but few achieve. Because of duos like the White Stripes and the Black Keys, public expectations of what a two piece blues/rock outfit can do have been re-assessed, all who attempt a similar ascension being forced to do so in their shadow. But this premonitiary handicap is brushed aside as Take It From Me sashays into view.

25 seconds in and you’re at the chorus. RL Burnside’s ragged tones are streamlined into muscular weapons, the fat-free songcraft stripped back to its very bones. Jimmy O’s guitar, given perfectly-considered octave treatment, is a wiry, serpentine brawler of a thing, its purposeful and direct lines spurred on by Mike Sorbello’s burly bear-strong beats. With a borderline-hip hop kick weight, the pendulum that is the human bottom cannot help but pivot deeply as the first track ends and Blamin’ It On You rips straight in.

Zep swagger hustling, untethered vocal-only breaks, a chorus hand-assembled for crowd participation-it’s all here. Live renditions of this song (as seen here) ably demonstrate the abandon with which the material is delivered. Not reckless but reigned, controlled, unleashed into juddering spasms when the protagonists decree it. The eye contact between the pair is strong enough to build a tower block on-everybody knows what’s happening and where they are. Such chemistry is truly rare and to be celebrated.

There is a change in atmosphere when Right Off The Shelf clicks into life. The guitar is left side only, drums to the centre and slight right, casting the listener back to another, simpler time. A straight up rock and roll number, capable of soundtracking a greasers underground dance-off, and allowing the Graveltones to tip their hat reverentially to their rockin’ forbears. Throw It Over Me pares the rhythm down to handclaps and kick, fuzz-emboldened lead lines coalescing with the hysterical blues yelp of the vocals. The chorus progression brings a broad smile to my face, recalling I’m Eighteen by Alice Cooper, adding some hardly-needed garage-rock points to the Graveltones bulging coffers.

If this record was a single, and thankfully it’s not, this review would have been shorter but no less keen. Sullen Blue is a monster of a song, the Clutch-esque drum beef dropping like a sex hammer onto the grimy, salacious riffs. A bit of guitar/vocal melodic interplay gives way to another bomb-proof chorus, an organ explosion and something that you don’t get often these days-a genuinely musical drum solo, played with utter confidence and compassion for the music it inhabits. A serious morality loosener on its own, within the context of an already charged record this is just obscene.

This record contains some elements not intended for younger listeners. A teacher or trusted family member is required for listening at all times, and unordained newcomers may strut uncontrollably upon initial hearing. Among the plaudits already received from newspapers across the globe (and a member of Steely Dan), this EP needs little assistance or vindication. Listen immediately, and get along to the London Borderline on 20/12/12 to see them tear it up, assuming we’re not all lizards by then.