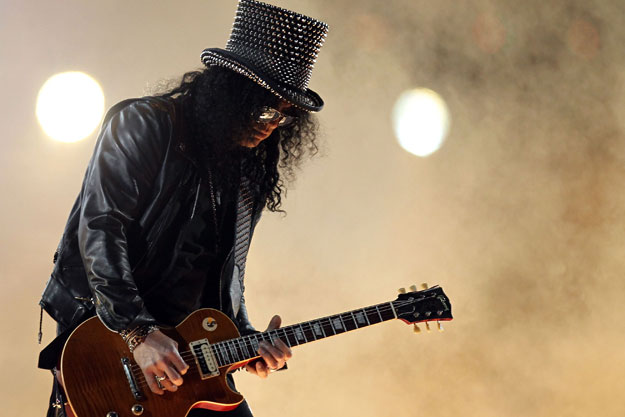 Rock and roll legend Slash brought his set to the Manchester Apollo on the 8th October 2012, featuring Myles Kennedy of Alter Bridge on lead vocals.

The god, that is Slash, opened his set with the heavy album track ‘Halo’, from his latest album ‘Apocalyptic Love’. With his own material, mixed in with Guns N’ Roses and Velvet Revolver classics, he had the crowd in awe from the very first minute.

Support came from ‘Ginger Wildheart’, who brought their alternative pop-punk sound to the stage, which was welcomed by the crowd. After wrapping up an energetic half hour set, the atmosphere was electric waiting for Slash and his band to enter the stage.

Following on from opener ‘Halo’, Slash went straight into ‘Nightrain’, the first of 7 Guns N’ Roses songs in his set. After a few more of his own tracks, and more Guns N’ Roses classics, he burst into ‘Rocket Queen’ by Guns N’ Roses, which featured an 8 minute guitar solo in the middle of the song, that has to be one of the best things that I have ever heard.

The set continued with a mixture of tracks from his two studio albums, with Todd Kerns (bassist) as lead vocalist for ‘We’re All Gonna Die’, from Slash’s first studio album, and Guns N’ Roses classics ‘Your Crazy’ and ‘Out Ta Get Me’.

Slash played a second guitar solo, which lasted for around 11 minutes, and from that it went straight into lead single ‘Anastasia’ from ‘Apocalyptic Love’. He then went on to play ‘You’re a Lie’ and Guns N’ Roses sing-a-long anthem ‘Sweet Child O’ Mine’, which brought out the air guitars and vocals in the crowd before he left the stage with massive Velvet Revolver anthem ‘Slither’.

Slash and his band came back on stage to play an encore of ‘Fall To Pieces’ by Velvet Revolver then ‘Paradise City’, which sent the crowd wild. Slash’s fantastic set just helped to conjure up a brilliant night of music and energetic masterpieces!