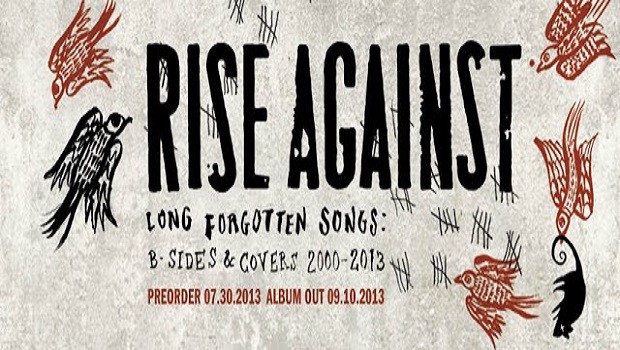 Over the last fourteen years, Rise Against have shown us time and time again that they’re more than capable of leading the modern Punk-Rock movement.

Following the successful release of ‘Endgame” in 2011, the Chicago-based band is back with a collection of B-sides, covers and “rarities”.

When a band is together for as long as Rise Against have been, and have released six well-received studio albums in that time, a few tracks get lost along the way. While we may not know the story behind some of these tracks, from this compilation we can tell they weren’t dropped for lack of quality. The majority of the tracks found on ‘Long Forgotten Songs’ are incredibly strong – strong enough for them to be added to live sets, in my opinion.

Die-hard fans will already be familiar with a lot of the content here. Songs like ‘But Tonight We Dance’, ‘Join The Ranks’ and even the Guitar Hero exclusive track, ‘Death Blossoms’, will make Rise Against followers delighted to hear again. Even for someone who hasn’t heard them before, these songs will serve as an excellent introduction to Rise Against. In the midst of the Punk-Rock mayhem, ‘Long Forgotten Songs’  includes a couple of must-hear acoustic tunes. ‘Everchanging’, the long time fan favourite, reappears on this album sung by Tim McIlrath backed only by a beautiful acoustic guitar piece.

‘Long Forgotten Songs’ also contains a selection of covers, however most are notably better than others. The band tried their hand at Danny Elfman’s ‘Making Christmas’, though unfortunately it is the weak link on the album. My favourite track available here is the rendition of ‘Ballad of Hollis Brown’. It’s been expertly adapted to fit the band’s primary sound, making it their own without sacrificing the alluring charm of the original Bob Dylan classic.

Another noteworthy cover is Journey’s ‘Anyway You Want It’. Admittedly, when I first saw this on the track listing I feared this wouldn’t suit Rise Against whatsoever, I even thought it would be deemed a failed effort. I have rarely been more pleasantly surprised than when I listened to it for the first time. Rise Against have managed to keep the fun, party-like atmosphere of the 80’s hit, while giving it a punk makeover that fits perfectly in this collection.

In conclusion, ‘Long Forgotten Songs’ is an album that all Rise Against fans should look into. This compilation features crowd pleasers for the most part, with several stand out tracks and only a couple of forgettable tunes.

Check out the video for Rise Against’s cover of Bob Dylan’s ‘Ballad of Hollis Brown’ below: