Review: Knuckle Puck – The Weight That You Buried 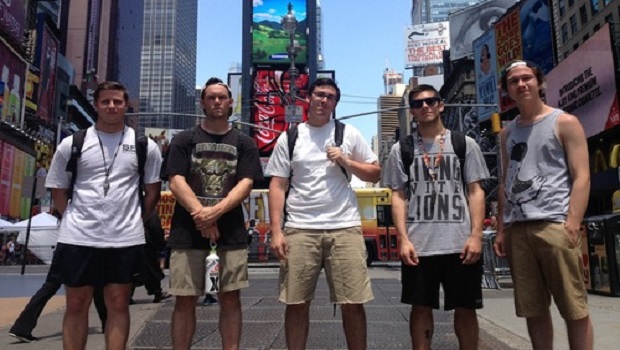 2013 has already been an incredible year for pop-punk.

With albums that blew everyone away from the big hitters on the scene like Man Overboard, The Story So Far, The Wonder Years and Transit to release’s coming from bands who are about to explode onto the scene like Real Friends and Neck Deep. Knuckle Puck can now add themselves to the latter list.

The Weight That You Buried is the second release from Knuckle Puck, following up last year’s ‘Don’t Come Home’ EP.

This EP , in my opinion, is everything that pop punk should be. Short, punchy songs that are full of angst with relatable lyrics that have you screaming them at the top of your lungs whether you are alone in your bedroom, driving your car or walking down the street.

The EP kicks off with ‘Everything Must Go’. From the first note your head is bobbing and after a few listens you are already singing along, stretching your vocal chords to the very limit trying to put the same amount as emotion into the song as the band does.

That is what grabs your about this EP. The pure emotion that is in each song. Take, for example, the second track on the EP ‘Your Back Porch’. The first song that Knuckle Puck showed fans from the EP and also the absolute stand out track on the EP, it could well find itself on many track of the year lists. The opening line “It’s 4am again and i’m falling asleep with my headphones in”, the almost trembling screech that is “again” makes you know that this is something the band have experienced on more than one occasion. Knuckle Puck have put heart, soul, blood, sweat, tears and by the sounds of it anything else they could find the make this EP what it is. The emotion in each song really does blow me away.

Knuckle Puck are a band that have only been around for a few years but their song writing abilities and musicianship is on a level of a band that has been around for a lot longer. My favourite line from the entire EP is from the final track of the EP “People Like You Make Me The Pessimist I am” hits me hard personally and I imagine a large percentage of Knuckle Puck’s fanbase. Which is why this EP will be such a hit. Yes the tracks are brilliant, catchy, punchy but more importantly Knuckle Puck have wrote songs that could almost give listeners closure on issues.

The Weight That You Buried is available to buy for $4 from Knuckle Puck’s bandcamp page here! For those British listeners, $4 is roughly £2.67 (according to the internet) so you are getting an absolute bargain.

Keep up to date with Knuckle Puck on: