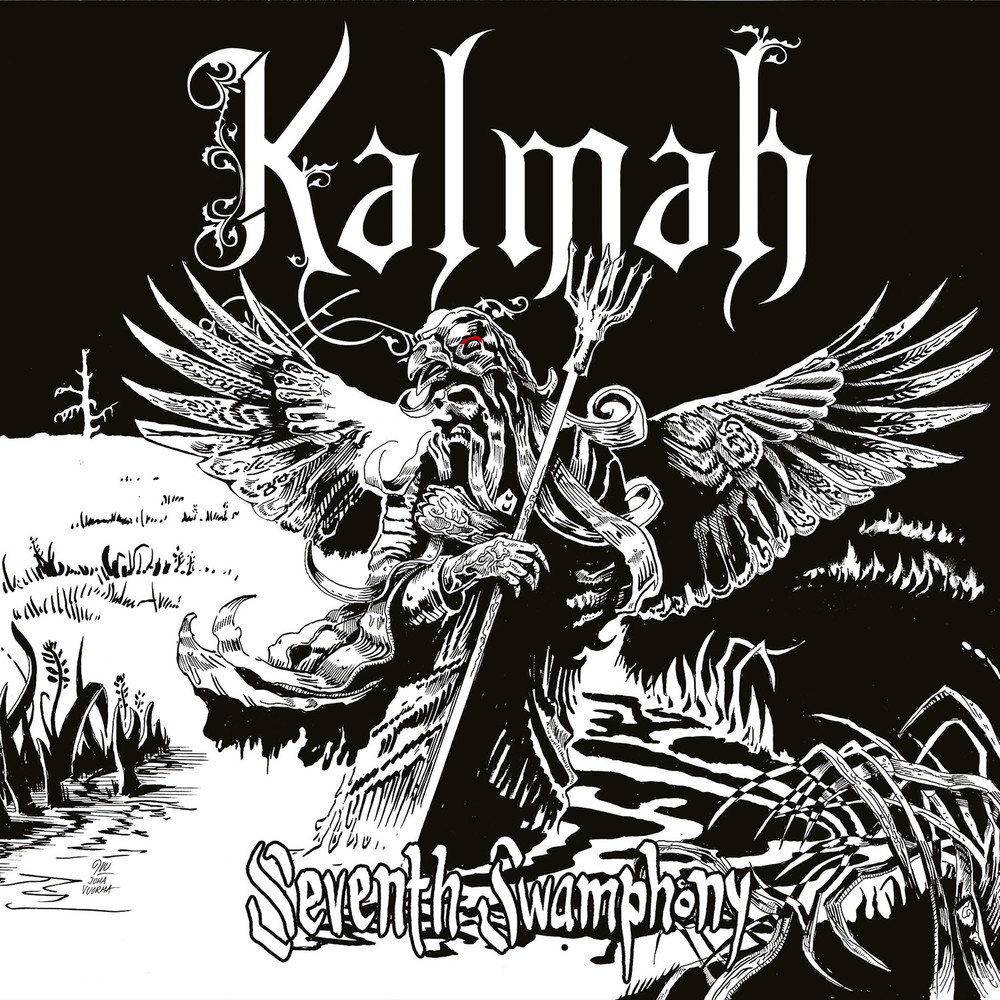 Somewhere in Finland is a bog, filled with demons. From that bog emerge Kalmah, all menacing brow and pathological intent. Existing at the crossroads of death, power, black and traditional metal, Seventh Symphony appropriately marks their 7th album since their inception in 1998, when Pekka Kokko’s previous group, Ancestor, rolled a seven. Coming 3 years after its predecessor, 12 Gauge, …Symphony is more mature, better appointed monster.

From the first bars of the title track, Kalmah aren’t pussyfooting. Exploding in a stramash of blasting and strident keys, the band effortlessly conjure a thousand giant bats screeching across a frozen lake. The speed with which the production takes hold of you is incredible – the guitars particularly are well-judged, being tight and muscular but with enough give to make them palatable to both ends of the heavy spectrum. A special mention too to the keyboards; it is distressingly easy to make this oft-derided instrument sound cheddary and twee in a metal context, but special care has gone into placing them at precisely the right point in the mix, and they sound knowingly magnificent, especially on “Deadfall” (the solo is superb).

The resolute rampancy of “Pikemaster” is so infectious that I found myself headbanging to it while cleaning the dishes. Bonus points too for casually tossing in the synths from Thriller, something the majority of stoney-faced bands would be too timid to do. Great chorus, and plenty of ground is covered, from balls-out proper rocking to a full on BM rattle.

“Hollo” displays a remarkable restraint, melodic in all directions, grimly waltzing its way to the albums’ only clean vocal. This in itself has an earthen elegance uncommon in this style. In its slower movements, this track contained just a little …Oceans-era Ahab, that unhurried majesty that the europeans do so well. Even when the band shift gears into mid-paced thrash territory, that elegant carriage remains, albeit flecked with dirt.

On standout track “Wolves On The Throne”, the band deliver something else, something that hints at their evolution. After all, “For The Revolution” and “12 Gauge” both contained a fair bit of genre-mashing, but this track, especially in the context of this album, and their previous work, hints at what’s to come. Listen hard and you’ll hear bits of Paradise Lost, tiny shards of Nile, early Metallica, and the pedigree of a band who know exactly who they are.

This is an infectious, immaculately crafted, occasionally silly, glorious, catchy album, written by a band who care utterly for what they accomplish, but not for what they are meant to do. There are no throwaway bits, and even the bendy keyboard solos will make you grin loonishly from ear to ear. I loved this-get your hands in your pockets come June 17th and battle dark mists until you have Seventh Symphony in your hands.

Truly a howl from start to Finnish.

Watch the video for Seventh Swamphony  :