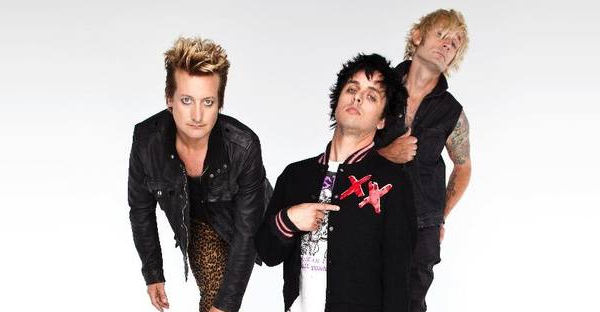 Rewind to last September and this show was looking nigh-on impossible given the situation that Billie Joe Armstrong was in. He’d checked into a substance abuse clinic two days after an onstage meltdown and with the pressure of not one but three new albums hanging over him the question on everyone’s lips was “Will Emirates even happen?” at the very least we expected a postponement. Afterall, a full recovery in the space of nine months is a lot to ask, throw in the fact that the whole world is watching and it’s even more of a challenge.

Today however, all that seems like a distant memory. As the band step onstage – proceeded by a man in a bunny suit, obviously – they look as comfortable as ever in front of the 60,000 strong crowd. Opening song ’99 Revolutions’ sets the bar high for the night which goes onto include toilet-roll dispensers, onstage appearances from fans and a water gun. Next up was ‘Know Your Enemy’  which is always guaranteed to open up the mosh-pits. “This is not television, everybody up!” was the message from Billie Joe as the opening chords struck and that tone was to continue throughout the night. Perhaps the events of last year were still in the minds of the fans but more than ever there seemed to be a feeling that tonight was something special, an event that may never have happened had things not resolved themselves quite so well.

With the release of three albums in such a short space of time nobody was quite sure which way the setlist tonight would go and before the gig the crowd was buzzing with speculation about which songs would open and close the set. Naturally, with a back catalogue as extensive as Green Day’s nobody will ever be completely satisfied and despite the obvious lack of set-staples such as ’21st Century Breakdown’ and ‘Good Riddance (Time of Your Life)’; the evening seemed to balance classics and newer songs fairly well, with more recent songs such as ‘X-kid’, ‘Oh Love’ and ‘Stay The Night’ fitting in to the two-and-a-half-hour set seamlessly.

The evening came to an end as an eclectic-as-always performance of ‘King for a Day’ (complete with oversized sunglasses and an epic saxaphone solo) made way for crowd pleasers ‘American Idiot’, ‘Jesus of Suburbia’. Finishing with a tear-jerking rendition of ‘Brutal Love’ we’re reminded that any doubts we had about Green Day’s ability to make an epic comeback were completely unfounded. When it comes to frontmen Billie Joe Armstrong is one of the best we have in this day and age. Why we ever doubted for a second that he wouldn’t come back bigger and better than ever with a show-must-go-on mentality is beyond me.