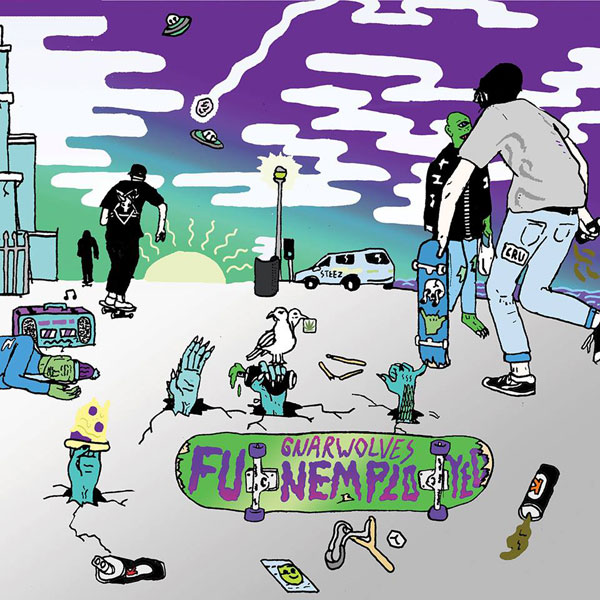 Funemployed is the latest addition to the back catalogue of Gnarwolves. The band has crafted an excellent fast paced, hard hitting sound that makes them really stand out in the UK music scene. Opening track Melody Has Big Plans is the perfect example of this, the track is 2 minutes 50 seconds of non-stop bone crunching punk rock.

The second track from the EP “Tongue Surfer” continues the pace and energy that fans have come to expect from Gnarwolves. With a proper sing along chorus included this will quickly become a fan favourite at live show with chances to scream the lyrics back at the band. Third track “Limerence” slows us down in the beginning before kicking up a gear half way through the bring back the pace and energy from the previous two songs. Final track “High on a wire” finishes off the EP the it started, with 2 minutes 12 seconds of pure energy and hard hitting punk rock.

The EP is everything that we’ve come to expect from Gnarwolves, Short and sweet songs that are full of energy. 2013 has already been a huge year for Gnarwolves and we are only in June. After supporting American heavy weights The Story So Far during their UK tour in April and May, having a spot on the line-up for Slam Dunk Festival and having just been confirmed to play the Lock-up stage at this years Reading Festival the second half of 2013 can only see Gnarwolves getting bigger, better and the recognition the band deserves.

Watch the video for Melody Has Big Plans: