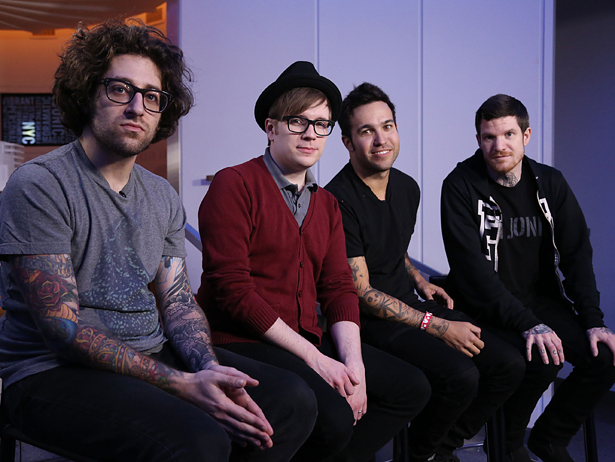 Since 2009, there has been a Illinois 4-piece shaped hole in the world of music. In February 2013, the hole was filled with the long awaited return of Fall Out Boy.

After releasing 5 albums and a greatest hits compilation Fall Out Boy went on an indefinite hiatus in 2009, leaving us all with something missing. After just under 2 and a half year’s they have returned with something quite marvellous in the shape of “Save Rock and Roll”.

Album opener “The Phoenix” a great energetic and catchy opener to the album. With a nice intro and guitar hook that sounds very much like the backing track to Plan B’s hit Ill Manors. Which to me is fantastic.

Track 2 “My song’s know what you did in the dark” Fall Out Boy’s come back track from February. When you first heard this track you knew that this album was going to be a different sound to the pre-hiatus Fall Out Boy. Very catchy and although different there is still so much of pre-hiatus Fall Out Boy that we knew and loved, and still love still in there. To me the song is saying that they are changing their sound because they want to and going in the direction they want to rather than pre-hiatus it was record labels trying to send them down a certain direction that they were not happy with.

Track 4  and track 7 of the album”Where did the party go?” and “Miss missing you” seem to be two tracks of filler to me. Nothing spectacular but not particularly bad, just mediocre. Don’t be fooled into thinking the songs in between are the same. Track 5 “Just one yesterday” featuring Foxes slows us down slightly, with nice vocals from both Stump and Foxes. The opening part of the song is almost Adele esque.

“The Might Fall” featuring Big Sean is similar sounding to “My song knows what you did in the dark”. One of the better songs on the album. Interesting and energetic. I feel like just bobbing in my chair as I listen and throw up hands up in a gospel choir kind of way. Big Sean’s verse towards the end of the song is a very good addition to what is already a solid track.

Track 8 “death valley” to me is another filler track, again nothing special or ground breaking. It does however have an interesting little electro breakdown towards the end that you could almost mistake for some light dubstep. Following on from that track 9 “Young Volcanoes” is the closest song to the Fall Out Boy of old. Nice enjoyable song with a nice little foot tapping moment at the end.

Track 10 “Rat A Tat” was a big disappointment for me. The song isn’t bad. It’s catchy and energetic. Everything we expect from Fall Out Boy it’s just the inclusion of Courtney Love. For most she seems to be just screeching. The song could do with a lot less Courtney Love and a lot more Patrick Stump.

Album closer and title track “Save Rock and Roll” featuring relatively unknown artist some of you may have heard of, Elton John. It starts the way any song featuring Elton John should, with a piano.  Patrick’s and Sir Elton’s vocals together sound phenomenal. It is by a country mile the stand out track on the album. There are no adjectives that can articulate the positive emotions and feelings I have to that song. Just a perfect album closer.

The album is very different to the “old” Fall Out Boy. You can see why the hardcore “fans” would pick faults but what needs to be recognised and appreciated is that the band have matured and changed while on hiatus and music has changed in that time. Their sound may be slightly different to that of “Take This To Your Grave” but it is better because it has matured with the band into something that is simply wonderful.

One thing’s for certain “Save Rock and Roll” isn’t Fall Out Boy “selling out” or “leaving behind their pop punk roots” which i’ve seen plastered all over the internet. This is Fall Out Boy doing what they do best. Making great music, that they feel proud of, music that they want to make, not caring what others say they should make and that is why this band will always be brilliant and will always grow and will never disappoint.

The album is released April 15th and the band can be caught in the UK at Reading and Leeds Festival this summer.