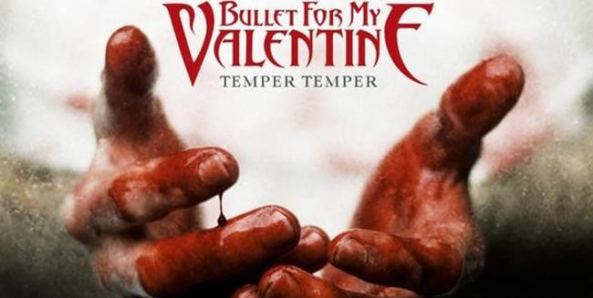 Welsh metal rockers Bullet For My Valentine are back with new studio album ‘Temper Temper’, after all the talk of internal frictions within the band, you get the feel the band have let everything out in this album.

From album opener ‘Breaking Point’, right from the off your thrown into screams and heavy as f*ck guitar riffs, thirty seconds in your left with a feeling that this is the album all Bullet For My Valentine fans have been waiting for.

Title track ‘Temper Temper’ is one fans will already be familiar with as it is one of the lead singles from the album, it is yet another track that shows off the bands excellent speedy guitar riffs. Flying through ‘POW’ and ‘Dirty Little Secret’, we hit one of the songs of the album, ‘Leech’ was wrote about that one idiot who always crashes a party. A song that really gets in your face, a real rock club dancefloor filler and most definitely a future Bullet For My Valentine classic.

‘Dead To The World’ gives the fans a chance to breath from the pounding this album gives you, a slow burner in which you can really feel the tension and anger in the band. Lyrically excellent too before the song explodes into ultimate metal mayhem, with a feeling of older Bullet For My Valentine about it, this is sure to be another classic for years to come.

The new single ‘Riot’ feels slightly dance/dubstep influenced, which certainly works and refreshes the album with something slightly different. The last three songs unfortunately don’t catch your attention as much as the rest of the album does but closing track ‘Livin Life (On The Edge Of A Knife)’ provides a real energetic finish to this angry, explosive metal album.