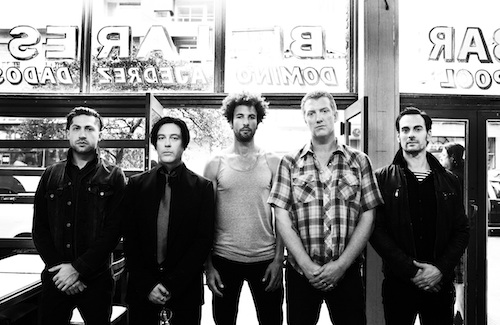 Following the release of their critically acclaimed sixth studio album ‘…Like Clockwork‘ which last week scored them a number no.2 in the UK – their highest UK chart position to date – Queens of the Stone Age have announced a November UK tour.

The band will kick off proceedings at Glasgow’s Hydro Arena on November 17th before performing at Dublin’s O2 Arena on the 18th, Belfast’s Odyssey on the 19th, Manchester’s MEN Arena on the 21st, Birmingham’s NIA on the 22nd and finally London’s Wembley Arena on the 24th.

Produced by Joshua Homme and QOTSA, recorded by Mark Rankin with additional engineering by Alain Johannes and Justin Smith, at Josh’s studio, Pink Duck, in Burbank, CA, ‘…Like Clockwork’ is the latest – and if critical consensus is to be believed, best – Queens Of The Stone Age album. The world would seem to agree, as the record has gone  to #1 in the US, Australia, Ireland and Portgual, #2 in the UK, Canada, Belgium, Switzerland, Finland and New Zealand, #3 in Holland and Austria, #4 in Denmark and top 10 in Germany, France, and Spain.

Queens Of The Stone Age UK and Ireland Tour:

Queens of the Stone Age tickets go on-sale 9am on Friday 21st June priced at £30.00 / £35.00 for London and £32.50 regionally (subject to booking fee) and are available from www.livenation.co.uk or www.ticketmaster.co.uk