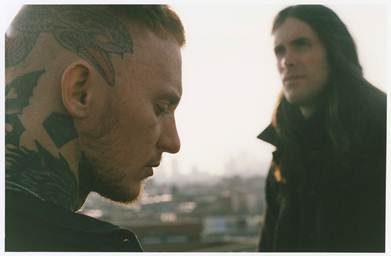 Pure Love today announce their first headline run of 2013, coinciding with the release of their debut album Anthems and next single Beach Of Diamonds.

The tour includes a headline show at XOYO on Valentine’s Day – the same day as the 1 year anniversary of their first ever show that took place at Bush Hall on February 14th 2012.

Their debut album Anthems, produced by Gil Norton and recorded in Brooklyn, includes the  free download Bury My Bones and the singles Handsome Devils Club and Riot Song.

Speaking of the album Singer Frank Carter: “We want to put it all out there,” says Carter, “blood, sweat and tears. But we also want to have a lot of fun. The intention is to write honest rock songs that are about love and death and sex. But to sell some records and have the big show too… Why the fuck not? Everything is in place to do that essentially. And so far, so good.”

The Brooklyn based Pure Love, Frank Carter and Jim Carroll have spent 2012 playing storming, riotous shows up and down the UK. As well as their own headline tours, they’ve supported Biffy Clyro, Paramore, Billy Talent and Lostprophets. In the summer, the duo played a phenomenal set at Reading and Leeds festival, drawing in crowds of over 10,000 and cementing Carter as one of the UK’s most exciting and prolific frontmen.

Their headline tour kicks off in February 2013 just ahead of the album release, full dates below: