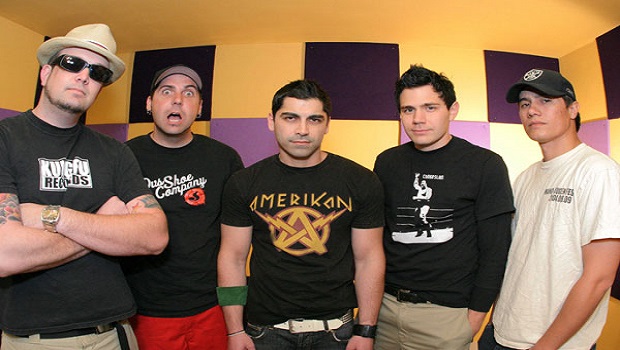 Two of ska-punk’s biggest names are united on the bill tonight, co-headlining a show that promises to prove that ska is well and truly not dead. Either Less than Jake or Reel Big Fish would have been perfectly comfortable headlining on their own tonight, both bands can pull huge audiences without breaking a sweat.

But it’s the third name on the flyers that’s the real treat tonight. Zebrahead fill a strange space between ska-punk and hip-hop, and are the perfect support act for this tour. From their debut in 1996, Zebrahead have gone from success to success, featuring on extreme sports game soundtracks and in teen comedies from the US year after year. Their 2003 MFZB album pushed the band in a punkier direction, and it’s the legacy of this album that has inspired their most recent release, Call Your Friends, their tenth studio album.

Unfortunately, their early set meant that they were playing to a smaller audience than Less than Jake and Reel Big Fish, both of whom played to a packed room, but the crowd were no less lively when Dan Palmer’s pickslide in the first bar of Rescue Me broke through the darkness and the stage lights picked out Ali Tabatabaee’s baseball cap.

The pop-punk guitar sound and the Matty Lewis’s melodic co-lead vocals contrasted with Tabatabaee’s rap segments almost as perfectly live as they do recorded. The OC punk rock scene is pretty incestuous, so it’s no surprise that Zebrahead is something of a supergroup, composed of former members of a number of other (generally less successful) groups from the area. Nevertheless, their touring experience and individual musical merits shone through, and the set was smooth, fluid, and expertly executed.

The energy the band put into the set was punctuated by brief pauses for chugging contests and other alcohol-fuelled antics. Incredibly, the band brought a fully supplied bar onto the stage, replete with beer, spirits, mixers, and even two German barmen. After a superb mix of new and old songs, Zebrahead’s short eleven song set came to a close with their epic Anthem. Reel Big Fish’s horns section joined the Orange County rockers in a collaboration that set the landscape for the rest of the gig.

A powerful performance that almost left me wishing Less than Jake and Reel Big Fish weren’t queuing up in the wings.